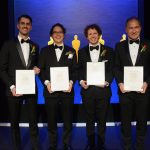 Photo by: Cyrill Beeler If you were one of the millions of moviegoers who contributed to the worldwide success of Avengers: Infinity War—the highest-grossing film of 2018—then you also got to witness the Medusa Performance Capture System in action. The team of computer scientists responsible for bringing to life characters like Thanos and the Hulk […]