The Distinguished Artist Award for Lifetime Achievement in Digital Art is presented annually to an artist who has created a substantial and important body of work that significantly advances aesthetic content in the field of digital art. 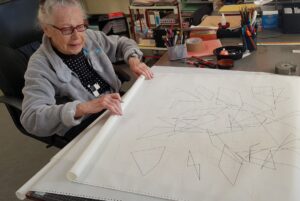 The 2022 ACM SIGGRAPH Distinguished Artists Award for Lifetime Achievement in Digital Art is presented to Vera Molnár for her many pioneering computational art techniques engaging human sensitivity in the production of her abstract geometrical artworks.

Molnár, born in Hungary, is a pioneer of digital art and one of the founding figures of computational, generative, and algorithmic art. Her work has inspired generations of artists, historians, curators, and researchers over the past five decades.

Since 1959, before her work with computers, Molnár was already working with systems and simple programs by hand. She said: ‘In order to process my research series in a systematic way, I initially applied a technique I called machine imaginaire. I imagined I had a computer. I created a program and then, step by step, I realized simple, limited series which were self-contained, and thus did not skip any shape combinations.’

As the only female founding member of GRAV (Group de Recherche d’Art Visuel), from 1961 to 1968 Molnár perfected her geometric language, complementing it with a systematic gesturalism.

Molnár programmed her artistic output through algorithms that became truly mechanical in 1968. Each work in her series Computer Drawings is different from the others, with segments, dots, and shapes responding only to the set of parameters that had been entered. These drawings stem from the dialogue between human and machine, and by playing with the equilibrium of this strange conversation, Molnár renders the former more adept and the latter more sensitive.

This balance of “randomness and redundancy,” as digital scholar Dr. Aline Guillermet wrote in her paper “Vera Molnar’s Computer Paintings ,” became central to Molnar’s exploration of the relationship between painting and computer programming.

Currently, Molnár is exhibiting a set of computer drawings from the 1970s at the prestigious 2022 Venice Biennale of Art. At 98 she is the oldest artist participating in the Biennale. She collaborated with Dr. Francesca Franco to create the ICÔNE 2020 glass works now also in an official Venice Biennale collateral exhibition.

Since the 1990s, her work has been featured in major international solo and group exhibitions and is in the collections of the Museum of Modern Art, the Victoria & Albert Museum, and the Centre Pompidou. In 2018 she received the AWARE Outstanding Merit Award from the French Ministry of Culture acknowledging leading female figures in the world of culture.

We are honored to add to her list of accolades, the 2022 ACM SIGGRAPH Distinguished Artists Award for Lifetime Achievement in Digital Art for her many pioneering computational art techniques engaging human sensitivity in the production of her abstract geometrical artworks.

Learn more about the Art Award Committee
Manage Cookie Consent
To provide the best experiences, we use technologies like cookies to store and/or access device information. Consenting to these technologies will allow us to process data such as browsing behavior or unique IDs on this site. Not consenting or withdrawing consent, may adversely affect certain features and functions.
Manage options Manage services Manage vendors Read more about these purposes
View preferences
{title} {title} {title}