Honoring the Outstanding Achievements and Service of our Community 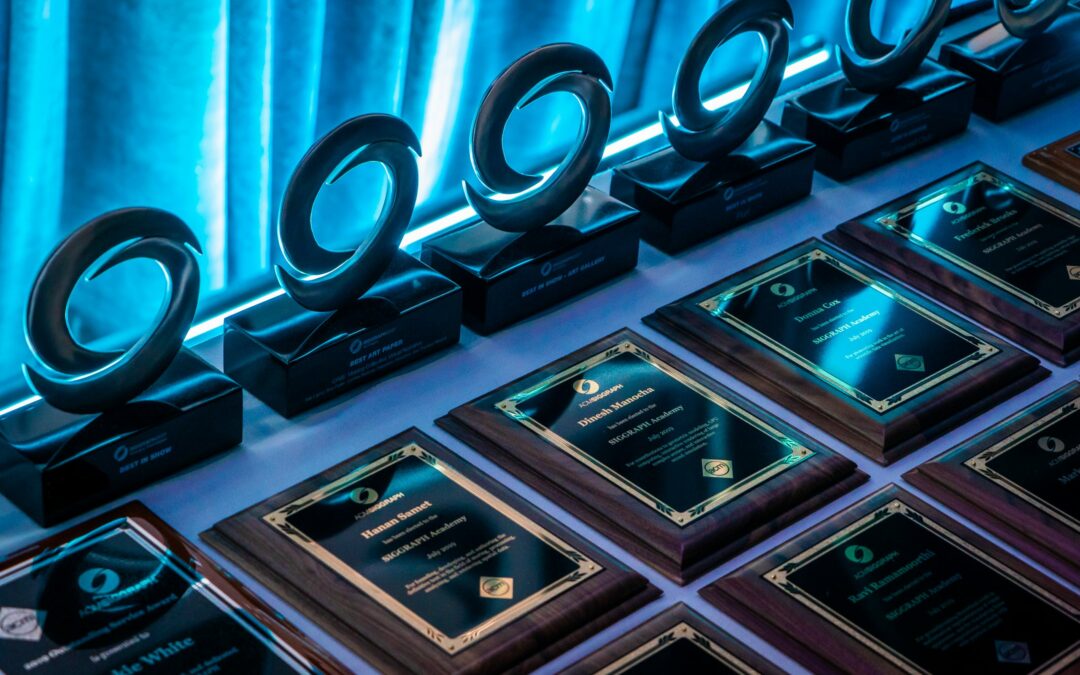 ACM SIGGRAPH and Awards Chair John (Spike) Hughes are thrilled to announce the recipients of the ACM SIGGRAPH awards for achievements and service.   The awards recognize the amazing accomplishments of members of our community in eight categories: early career, mid-career, and life-time research, service to the field, art, education, and the practice of computer graphics and interactive techniques. The 2020 cohort of awardees have made breakthrough innovations with both immediate and long term impact in many areas of our field.  Those areas include visual recognition, 3D content creation, data-driven computational methods, and interactive and immersive media.

“We congratulate our colleagues and fellow members for their amazing work in advancing the field, whether through their research, art, service, or educating,” says Jessica Hodgins, president of ACM SIGGRAPH.  Each recipient will be honored during SIGGRAPH 2020, which will be held in a virtual format later this summer.

For fundamental contributions to physically-based and scalable rendering, material modeling, perception for graphics, and visual recognition

Bala’s early research focused on realistic, physically-based rendering and includes seminal work on scalable rendering, notably the development of Lightcuts and other approximate illumination algorithms. Her work has been influential in volumetric and procedural modeling of textiles and in the role of perception in graphics. She has also been recognized for her work on intrinsic images and material recognition using crowd-sourced training data and has conducted pioneering work on style recognition using deep learning. This technology powered GrokStyle, a visual search startup cofounded by Bala.  She is the co-author of the book, Advanced Global Illumination, which has become a classic text in the field.

For outstanding contributions to geometry processing, including shape deformations and robust mesh tetrahedralization

Jacobson’s contributions to computer graphics span numerous aspects of 3D content creation. He developed an innovative approach to real-time shape deformation, leveraging theoretical insights about elastic deformation as well as practical considerations of GPU computation.  He improved skinning animation by proposing a robust method of automatic weight computation, a technique termed “bounded biharmonic weights.” He then married skinning with elastic energy optimization to yield a method for interactive shape deformation of unprecedented quality and speed. This method, published at SIGGRAPH 2012, has been since implemented in open-source and commercial software, including the Emmy award-winning Adobe Character Animator.

His work has made a tremendous impact academically and in practice. He is actively driving open source efforts. The C++ library libigl, whose code and maintenance are spearheaded by Jacobson and collaborator, Daniele Panozzo, is used by tens of thousands of developers in the field.

For his dissertation that bridges graphics to vision, programming systems, and machine learning through differentiating graphics algorithms

Li’s dissertation explores the connections between visual computing, programming systems, and statistical learning. He connects classical computer graphics and image processing algorithms with modern data-driven methods to facilitate physical understanding. The main theme of Tzu-Mao’s dissertation is about addressing the challenges of computing and applying the derivatives of complex graphics pipelines, in order to use them for fitting and sampling parameters or solving inverse problems. The contributions go beyond traditional automatic differentiation by addressing discontinuities in graphics algorithms and massive parallelism for modern hardware.  The research code used for the dissertation is open-source and already has numerous users in academia and industry. In particular, the differentiable renderer, “redner”, written by Li has been downloaded more than 100,000 times to date.

For his long-term service to ACM SIGGRAPH, and in particular to the Professional and Student Chapters and to the SIGGRAPH and SIGGRAPH Asia Conferences

Frey’s involvement in SIGGRAPH is rooted in 1994 when he served as a student volunteer at the annual conference. Frey has served in numerous student committee roles and leadership positions for the organization, including on the Executive Committee and in key positions for the SIGGRAPH conference. From 1995-2003 he was a member of the International Resources Committee and was the International Resources Chair at SIGGRAPH 2002. In 2001-2004 he was an Executive Committee Representative to the Conference Advisory Group. He was the Emerging Technologies Chair at SIGGRAPH 2014 during which he worked closely with Laval Virtual on the installation exchange program. He has served as reviewer and jury member many times, including Courses, Posters, and the Unified Jury.

Shaw has been a leading figure in new media art since its emergence in the 1960s to its present-day technology-informed and virtualized forms. In a prolific career of widely exhibited and critically acclaimed work, he has pioneered the creative use of digital media technologies in the fields of expanded cinema, virtual and augmented reality, immersive visualization environments, navigable cinematic systems and interactive narrative.

Shaw’s numerous internationally exhibited and critically acclaimed artworks are milestones of technological and cultural innovation that have had a seminal impact on the theory, design and application of digital media in art, society and industry. His artistic achievements are among the most cited in new media literature. During his career, his works have been presented at leading public galleries of museums, including the Stedelijk Museum Amsterdam; Centre Georges Pompidou, Paris; Kunsthalle Bern; The Guggenheim, New York; and Hayward Gallery, London.

Baron’s early work at Ford Motor Company introduced VR, AR and MR technologies for vehicle verification. This innovative work included developing the Ford Immersive Vehicle Environment (FiVE) process and integrating it into the Ford Global Product Development System. This means that before going into production, every vehicle made at Ford must be reviewed in an immersive, ray-traced, photorealistic virtual environment. A true trailblazer, Baron has continued to push technology, embracing new AR and MR applications like the Microsoft HoloLens to improve immersive experiences for designers.

Beyond her more than 30-year-career at Ford, Baron has influenced the way other engineers approach industrial design. Her work on FiVE influenced engineers to develop the Boeing Immersive Development Center (IDC), a premier, world-class, immersive product development center with over 300 programs and used by over 3,000 teammates.

Baron has also shared her passion for graphics with the SIGGRAPH community, participating in various roles, from reviewing content to serving on a SIGGRAPH Strategy Team. She has presented content at Emerging Technologies, showcasing real-time raytracing in 4K in an immersive environment, during the 2015 conference.

Greenberg’s pioneering efforts in computer graphics started with the realization that computer graphics techniques would become instrumental in architecture and engineering disciplines, but his interests quickly spread to areas from computer animation to photo-realistic rendering, to color theory. His early animation Cornell in Perspective (1971) was one of the first color computer graphics animations made. However, even with all the amazing advancements that have come out of his lab, Greenberg has said that it is his students and their impact on the field that is his proudest achievement. He is renowned not only as a graduate advisor, but for his interactions with undergraduate students. Six of his former students have gone on to win the ACM SIGGRAPH Achievement Award, and two have won the prestigious Stephen A. Coons award for outstanding creative accomplishments in computer graphics – the same award that Greenberg himself won in 1987. Fifteen of his former students have won Merit or Scientific and Technical Academy Awards.

At Cornell, where he has served on faculty since 1965, he also is director of the Program of Computer Graphics and founding director of the NSF Science and Technology Center. He holds joint appointments in the Departments of Architecture, Art, Computer Science, and the Johnson Graduate School of Management. He is a member of the National Academy of Engineering, and a Fellow of the ACM, and of the American Association for the Advancement of Science. His engagement with the annual SIGGRAPH conference is legendary. He has been a fixture at virtually every SIGGRAPH conference, having informal meetings with anyone who seeks him out.

An honorary group of individuals who have made substantial contributions to the field of computer graphics. These are principal leaders of the field, whose efforts have shaped the disciplines and/or industry, and led the research and/or innovation in computer graphics and interactive techniques.

For fundamental contributions to physically-based and scalable rendering, material modeling, perception for graphics, and visual recognition.

For trailblazing work in bringing virtual environments and related interactive techniques to engineering and design processes in multiple industries.

For development of physics-based fluid simulation, illumination simulation and character animation, and for advising and mentoring many leading researchers in academia and industry.

For a singular vision and pioneering efforts in the creation of interactive and immersive media art.

For contributions in geometry processing and interactive geometric modeling.