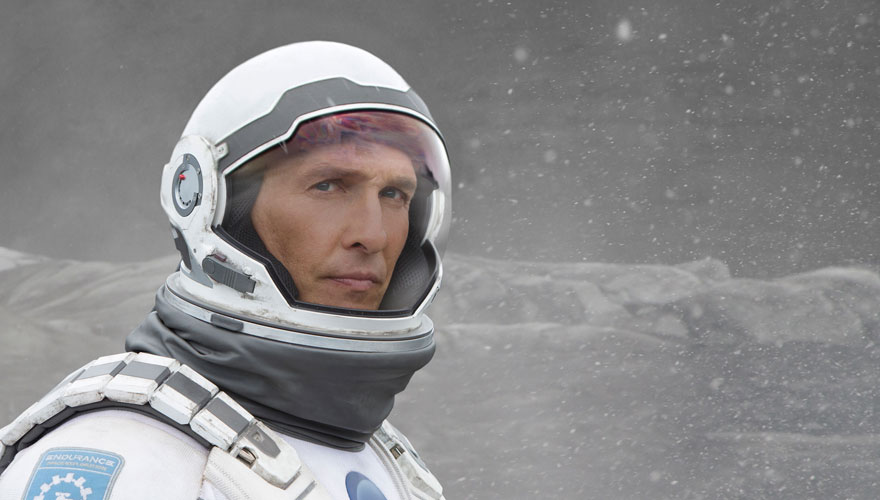 The 2014 film "Interstellar" follows a team of researchers and a former NASA pilot (played by Matthew McConaughey) on an odyssey into the depths of space, chronicling the group's struggle to find a new home for mankind before Earth becomes uninhabitable. The ambitious film bridges the gap between art and science by using the medium of film in a novel way: to visualize cutting-edge scientific research. Working in concert with a prominent astrophysicist (Kip Thorne), the film's visual effects team created what may be the first scientifically accurate display of a black hole on the big screen.

To fully realize director Christopher Nolan's vision for "Interstellar," visual effects studio Double Negative was tasked to "produce images of things that aren’t even in our dimension, and furthermore have them accurate to not only quantum physics and relativistic laws, but also our best understanding (guess) of quantum gravity.” (FX Guide – "Inside the Black Art"). To ensure scientific accuracy within the film, Double Negative’s team, led by VFX supervisors Paul Franklin and Andy Lockley, collaborated with theoretical astrophysicist Kip Thorne. Thorne shared his knowledge of black holes, and how he envisioned they would appear. Instead of the typical movie version of a black hole, which is depicted as a breach within space, Thorne’s research indicated black holes might be more like three-dimensional spheres. The physical appearance of Thorne's black holes is colorfully described in an interview with Paul Franklin in the Warner Brothers behind-the-scenes video "Interstellar: Building A Black Hole" (below):

“The black hole warps space so much, it just looks like you’re looking at a strange sort of funnel in the sky — with this intensely black circle at the middle of it. But the gravity of the black hole draws in all the matter from the surrounding universe, and this spins out into a giant disks around the central sphere. As it whirls in towards the center, the gas gets hotter and hotter, and this thing — the accretion disks around it — shines brilliantly … the gravity twists this glowing discs of gas into weird shapes, and you get this extraordinary sort of rainbow fire across the top of the black hole.”

Typically, when Hollywood has needed to create black holes for the big screen, they've turned to ray-tracing software. Unfortunately, as Double Negative CG supervisor Eugénie von Tunzelmann pointed out in a 2014 interview with Wired, such software “makes the generally reasonable assumption that light is traveling along a straight path” — which is not what the team wanted for "Interstellar." The science behind Thorne’s black hole (Gargantua) was on a completely different level, so to execute Thorne's vision, the Double Negative team created a new renderer.

Gargatua wasn't the only visual effects marvel in "Interstellar." Director Christopher Nolan also wanted to convincingly render waves that towered more than 4,000 feet above the actors and their water-bound spacecraft. The team at Double Negative used footage of large waves off the coast of Hawaii as their base, and relied on the team’s imagination for the rest — since waves 4,000 feet tall are nonexistent on Earth. They used a system of deformers to get the shape of the waves, then ran a series of detailed surface simulations with the company’s proprietary Squirt Ocean toolset (to create the wavelets, surface foam and spray).

The dust storms were a mixture between computer graphics and practical effects. Three of the dust storms were digitally fabricated based on extensive research on real dust storms in African deserts, as well as the 1930s Dust Bowl in America. The Double Negative team relied on both propriety tools and Houdini (3D animation software) to create the massive storms in the film. The project was especially tedious for rotoscope artists, as there were no green screens, and the dust storms were in full IMAX.

In order to create authentic space sequences, the VFX team were inspired by images taken of the Apollo Lunar mission of the 1960s and 1970s, and of the astronauts on the International Space Station. Double Negative’s Paul Franklin says the team maintained authentic exposure ratios, and avoided floating cameras in space by finding vantage points on the spacecraft (with the exception of a few super-wide shots).

For the creation of the film’s robots (TARS and Case), Nolan wanted to avoid making a robot with human features. Instead, the robot designs were inspired by modern art — specifically, minimalist sculptures from the post-war era. The result resembled present-day robots with a lack of physical human characteristics. Two versions of TARS were built: one practical, one digital. After executing the live action robot performances, the majority of the final shots “were achieved in camera with minimal digital work required to remove the performers from the shot,” said Franklin in a January 2015 interview with Art of VFX.

As for the environment of the Tesseract, the team scanned Murph’s bedroom at the farmhouse set and recorded each object in that room in high resolution. With the creation of a digital model, Double Negative fabricated the additional timelines and the fine threads of light that wove through the scene. Simultaneously, the film's art department reconstructed a live version of the set to incorporate actors in the scene. To give a sense of zero gravity, actor Matthew McConaughey was suspended on a wire rig inside the set. Filming the Tesseract scene using IMAX cameras, the filming crew projected animation patterns of moving lighting onto the set. The set was the expanded into infinity by layering the digital model atop the physical set.

Though "Interstellar" has a relatively low number of visual effects shots compared to other modern effects-heavy films (700 VFX shots, compared with Marvel’s "Guardians of the Galaxy,"’ which had 2,750), it's no surprise that the film won this year's Academy Award for Best Visual Effects. The "Interstellar" visual effects team truly pushed the boundaries of reality, vividly expanding our perception of the future — and what lies beyond our planet.