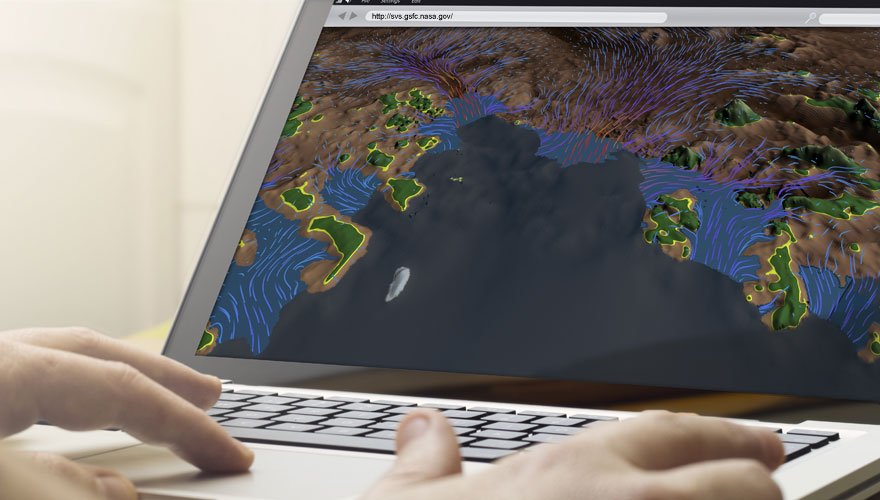 Many of us have watched informational visualizations about interesting scientific concepts without giving a second thought to how they were created — but, in reality, there is quite a lot that goes into the making of these often intricately detailed and functional works of art. Scientific visualizations present complicated topics in a digestible way, a process that often involves an entire production team, including the scientists themselves. The result is well worth the time and energy, especially if it means that more people are literate in the complex areas of research illuminated by these talented individuals. 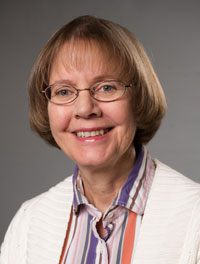 Cindy Starr is an advanced data visualizer at NASA Goddard Scientific Visualization Studio. Her job is to create imagery and animations that tell NASA’s story of exploration and discovery on Earth and beyond. After viewing some of the content she’s created and contributed to, we decided to ask her some questions about her work, her career, and the process behind creating such stunning visualizations.

What led to your involvement with visualization at NASA? Have you always wanted to do it?

I first became interested in computer graphics in the 1980’s while working on my master’s degree at the University of British Columbia. After graduation, I took a position with the Earth and Space Science Computer Center at NASA Goddard Space Flight Center in Greenbelt, Maryland. At that time, everything was primarily vector graphics, using graphics terminals attached to mainframe computers. Scientists used packages like NCAR Graphics to plot their data. I remember the day when they brought the first Silicon Graphics workstation into Goddard, opening up the possibility of high-resolution raster graphics for the first time. At that time, nobody knew how to program the SGI using the IRIS GL graphics language, so I was delighted to have the opportunity to do so.

How long does the process take to create a fully narrated piece, such as your recent work on Greenland?

Many participants contribute to developing a short produced piece like the one that we just completed about the age of the Greenland ice sheet. The primary person is the scientist, since it is essential that we accurately represent the data that he or she provides for us. Of equal importance is the media coordinator who brings a broad vision and direction to each project and arranges for the release. Other people often participate, including additional science advisors and visualizers. Each person brings a different perspective to the project, improving the final quality of the visualization by offering solutions that other team members might not have considered.

We usually start with the rough draft of a script that is created by either the media coordinator or the scientist. After a few rounds of email comments and corrections, the team meets on several occasions to discuss the storyboard and to work out the visuals to accompany the script. Often we need to create rough drafts of some visuals in order to see what ideas will work. We are actually portraying visual representations of arrays of floating point numbers (scientific data). Until you examine what the data looks like given the different treatments, you cannot determine what will work and what won’t. Sometimes we find that the script must be reorganized or revised in order to determine a visual sequence that best presents the story.

Most of the time required to create a produced visualization is not the animation time. Often, just developing a final script can take several months of lapse time. For example, we started work on the Greenland stratigraphy animation mentioned above in May of 2014 and the final visualization was released in January of 2015, but only about 2 months of that time was spent developing the actual animation.

What leads to the decision to actually create an animation for one subject, as opposed to another?

Issues related to which stories our team pursues are determined by NASA’s Office of Communications, managers of our studio and the science teams. We provide visuals primarily to groups that provide funding for our studio. Some groups sustain a full-time animator who works with their team. Those animators develop an expertise in the area and the data used by the science teams. Other animators work on a variety of projects. There is always a priority queue of projects waiting for an animator to be assigned. The visualizers are often given the choice between several of the projects that are among the studio’s top priorities. Of course the most coveted assignments are the ones with the most interesting science story, the best quality data and the longest lead-time. There is little opportunity for creativity when the animation is due within 6 – 8 hours! The challenge for every project is to do the best visual possible that the allocated time will allow.

Do you use “in-house” tools to create the visualizations, or are the things you use commercially available?

The primary tools that we use are commercial. We use Interactive Data Language (IDL) for much of our data preprocessing, and both AutoDesk’s MAYA and Pixar’s RenderMan for creating many of our visualizations. However, these commercial tools were designed primarily for animators in the entertainment business. We are grateful that they were built with enough flexibility to allow them to be customized for other purposes. In our studio, various team members have customized each one of these tools to meet the unique needs of our studio, sharing their customized tools with other team members. Some of these custom methods are simple and some are quite extensive. For example, we must correctly geo-referenced our data so team members have developed manifolds in RenderMan that accurately position data onto a globe, transforming the input data from a variety of different frequently used geographic projections. Other custom tools include a method for mapping data files based on a date keyframed in the scene and an extensive flow system that correctly propagates curves through 2 or 3D vector fields.

What’s the most difficult component of creating a full-fledged animation / visualization?

The primary challenge of creating a visualization is to develop a method that accurately represents the meaning evident to the scientist in the data. We need to translate the vision in his or her mind’s eye into a concrete image that people can understand. Sometime this can be accomplished by integrating data from a variety of sources. Other times a new visual treatment must be developed and refined. On some occasions we actually have to admit to the scientist that we are unable to present the data because we can find no visual representation to communicate what he/she understands from analysis of the data. Thankfully, this is a rare occurrence!

Do you have a favorite part of the process? If so, what is it?

My favorite part of the visualization process is in assisting the scientist in communicating their knowledge and insight to a general audience. Much of their work is highly technical and complex — far too difficult to present in the ordinary news media. I love working iteratively with the scientist, presenting their data in different forms until we identify a method that provides a clear and accurate representation of their results.

I also enjoy the collaborative environment in our studio and the camaraderie present among the team members. A visualizer always has access to the entire staff for solving problems, whether the problems are creative, scientific or technical. Internal reviews of projects in-progress usually yield great ideas that significantly improve the result. The feedback that I receive from my colleagues is invaluable.

Where do you see the future of visualization heading for NASA?

Visualization has become a primary means of communication at NASA, supporting outreach to others in science community as well as to news and social media outlets. With broadband widely available, HD resolution science visualizations are widely available on the web. In addition, one of the most successful formats on which to present data visualization is the hyperwall, where high resolution (e.g. 9600 x 3240) visualizations are played across many display screens. This has been a wonderful way for our scientists to communicate ideas and results at scientific meetings and conferences around the world.

How much freedom do you have when it comes to decisions for a project?

Each project is unique. The amount of freedom that the visualizer has depends on the team assembled for the project. For some small projects, the animator is working alone so no one else may really influence the final animation. Larger projects are a negotiation between the scientist, media coordinator and visualizer. We try hard to make certain that we do not generate any visual that could be misleading, but at the same time we want to satisfy the media coordinators and the science teams with the products that we create. Often, if we are able to show an alternative that is better than what they had first envisioned, they are more than happy to endorse the alternative.

Have you been particularly proud of any specific visualizations?

I have had the privilege to visualize some of the most significant research on the changes taking place on our planet, primarily related to the ice sheets of Greenland and Antarctica. The significance of this is not a reflection of my work but of all the scientists, engineers, managers and NASA mission team members that have enabled this research to take place.

Do you have any advice for those who want to pursue similar work?

I encourage anyone with a passion for science and an interest in visual communication to pursue an education in the field. Most of the visualizers in our group have advanced degrees in computer science, but some have PhD’s in a scientific discipline. Two team members also have MFA’s. Some combination of education in physical sciences and in computer science is a great background for pursuing a career in scientific visualization. In addition, a background in art is always an asset.