It's rare for visual effects artists to find themselves the focus of attention at a red carpet gala, despite the ever-increasing importance of effects in film and television. Unaccustomed to the chaos of flashing bulbs and chattering shutters, many of the nominees at the 12th Annual Visual Effects Society Awards on Wednesday, February 12, were understandably flustered as they approached the array of lights and cameras skirting the VES red carpet.

"Is this where I stand?" asked more than one bashful nominee.

After posing for a moment or two, most of the nominees quickly slipped away — politely making room for others to have time in the spotlight. At one point, a crowd gathered outside the hotel lobby, peering at the commotion through the window. Gawkers were visibly perplexed, unsure what to make of the flurry of press surrounding faces they'd never seen on TV or in magazines.

To onlookers, the humble VES award nominees might not have appeared to be people of celebrity status — but in fact, they number among the most exceptional creative and technical minds in the entertainment industry. 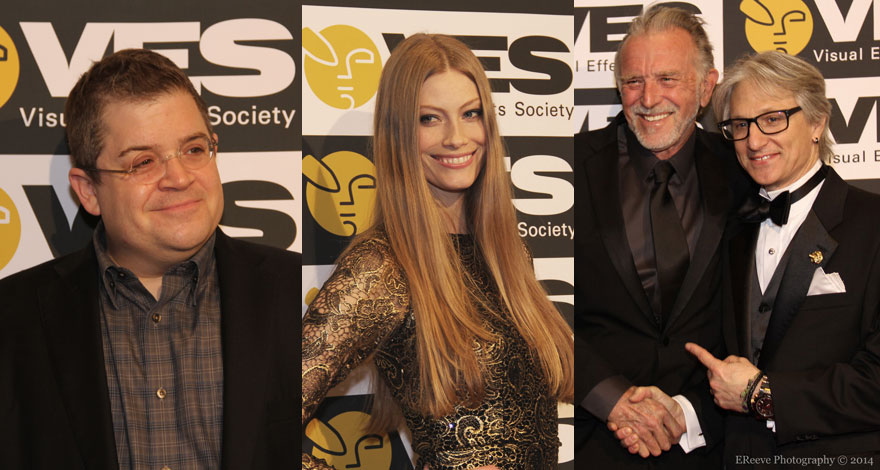 VES Lifetime Achievement Award recipient John Dykstra seemed to take the attention in stride, however, jokingly shoving VES President Jeff Okun off the red carpet and commanding: "Get out of my shot!"

The awards show launched with host Patton Oswalt delivering his unique brand of self-deprecating humor. "I'm the guy you'll be digitally removing beads of sweat from as the evening wears on," he joked.

In addition to Oswalt, there were a number of other celebrities in attendance: Grammy-Award-winning musician Pharrell Williams served as a presenter, along with actors Sandra Bullock, Bruce Boxleitner, Michael Ealy and Alyssa Sutherland.

"This is a big deal," said Pharrell, taking the stage. He looked around at the crowd and shouted, "The VES awards!!"

Patton Oswalt seemed to be in agreement, expressing his admiration for visual effects artists: "I love watching what you guys do," he said. "It melts my brain."

The winners were announced and called up one by one, each receiving a gold statuette of Georges Méliès' iconic moon from the 1902 film "A Trip to the Moon." In all, 24 award categories were honored, including the under-recognized category of "supporting" effects. Director Alfonso Cuarón was presented with the VES Visionary Award; not surprisingly, his film "Gravity" took home six more VES awards. Other big winners were "Frozen," which garnered four awards, and "Game of Thrones," which snapped up three.

The Beverly Hilton gala was rife with the glitz and glamour of Hollywood; gowns sparkled, chandeliers glinted and bubbles streamed through flutes of champagne. More striking than the glamor, however, was the sense of satisfaction that filled the room. Visual effects artists were getting the credit they deserved.

A full list of all the VES Award winners is available at the end of this article.

The VES Awards gala at The Beverly Hilton

Outstanding Created Environment in a Commercial or Broadcast Program: "Game of Thrones": The Climb

Outstanding Virtual Cinematography in a Live Action Commercial or Broadcast Program: "The Crew"

Outstanding FX and Simulation Animation in a Commercial or Broadcast Program: PETA: "98% Human"

Outstanding Compositing in a Broadcast Program: "Game of Thrones": The Climb

Outstanding Compositing in a Commercial: "Call of Duty: Epic Night Out"