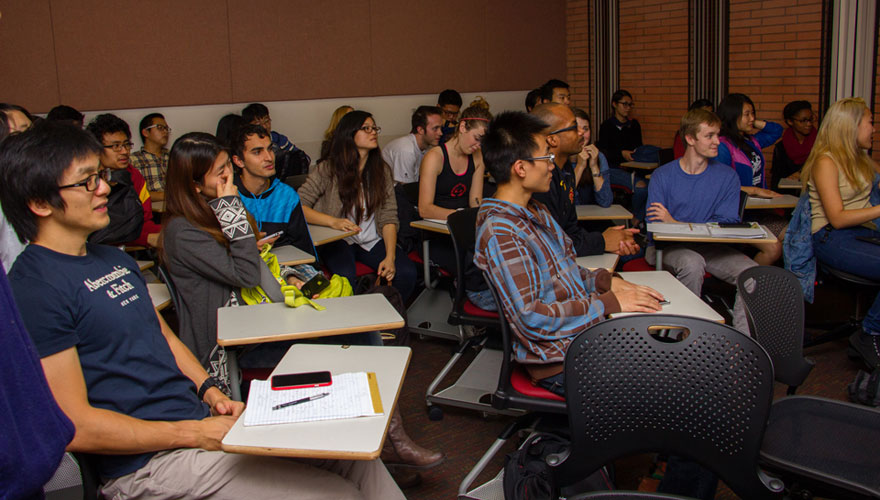 Members of the newly-launched USC ACM SIGGRAPH Student Chapter are particularly well positioned to volunteer for SIGGRAPH 2015. Literally. The University of Southern California is just two miles from the Los Angeles Convention Center, which will host SIGGRAPH 2015 — the world's largest international conference on computer graphics and interactive techniques — from August 9 to 13, 2015.

Because of USC's close proximity to the LA convention center, USC ACM SIGGRAPH was eager to inform its members of the opportunity to serve as student volunteers at SIGGRAPH 2015 — and, consequently, attend the conference for free. To drive the message home, USC chapter leadership invited the chair of the SIGGRAPH 2015 student volunteer program, Christine Holmes, to come to their November meeting and speak to their chapter members in person.

In addition to providing an overview of volunteering at SIGGRAPH, Holmes offered advice about completing the student volunteer application and gave eye-opening examples of how serving as a student volunteer can become a pivotal point in a student's career trajectory. According to USC ACM SIGGRAPH Student Chapter Chair, Shannon Kraemer, the crowd was abuzz with excitement. "Christine gave us many reasons to get excited [about SIGGRAPH]," said Kraemer. "We are most excited to arrive at SIGGRAPH 2015 with a strong Trojan (USC's mascot) presence, and to hopefully form a community that will keep our chapter strong for many years to come."

Other events put on by the USC ACM SIGGRAPH Student Chapter have included a screening of the 2014 Computer Animation Festival, a 3D printing demo and a lecture about the history of computer graphics by USC Professor Saty Raghavachary. In February, the chapter will visit the USC Institute for Creative Technologies, where members will be provided with a behind-the-scenes look at some of the groundbreaking computer graphics research underway at the facility.

For details on how to start your own professional or student chapter, check out the Start an ACM SIGGRAPH Chapter page of the ACM SIGGRAPH website.