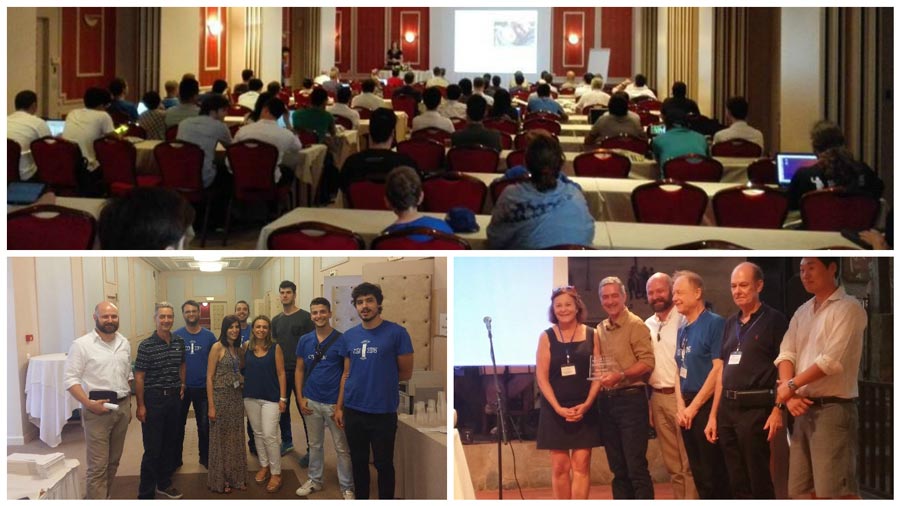 Crete is the 5th biggest Mediterranean Island, lies in the southern frontier of Europe, and is one of the most popular European tourism destinations. The conference was organized by the Institute of Computer Science of the Foundation for Research and Technology Hellas ;(ICS-CVRL/FORTH) and the Computer Graphics Society (CGS) in cooperation with ACM-SIGGRAPH and The Eurographics Association.

This special issue of The Visual Computer Journal is composed of the 35 best full papers of CGI’16. We have received 150 full paper submissions from 40 countries, making the acceptance rate about 20 %. To ensure the highest quality of publications, each paper has been assigned to three expert reviewers. The International Program Committee was composed of 113 members plus 110 external sub-reviewers invited by the IPC.

The CGI’16 Career Achievement Award has been presented this year to Prof. Panos Trahanias, program co-chair of CGI’16 and conference chair of CGI’04.

Expressive 2016: The Joint Symposium on Computational Aesthetics and Sketch-Based Interfaces and Modeling and Non-Photorealistic Animation and Rendering (Co-Sponsored) 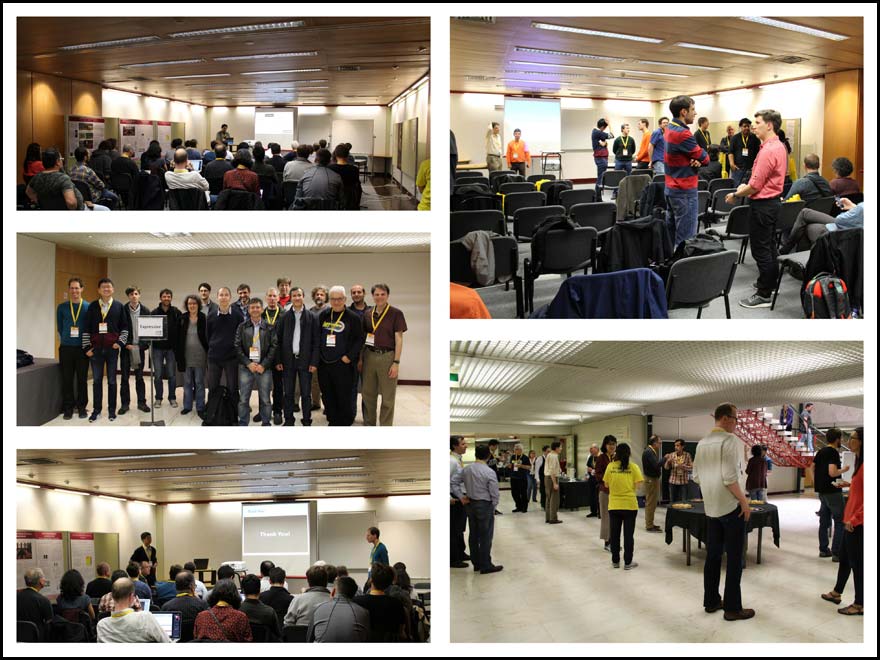 The Expressive 2016 took place in Lisbon, Portugal, from May 7 to 9, co-located with the Eurographics 2016 conference. Expressive is a Joint Symposium on Computational Aesthetics (CAe), Sketch-Based Interfaces and Modeling (SBIM) and Non-Photorealistic Animation and Rendering (NPAR), co-sponsored by ACM SIGGRAPH and Eurographics.

The 2016 program consisted of two keynote speakers, 15 papers (from 28 submissions), four bridging papers, four posters and four artworks. In total, 41 participants attended Expressive’16, during a two days event. The audience was diverse with attendees from a wide variety of countries and from different backgrounds, namely computer science and arts/design.

The Eighth International Conference on Motion in Games (MIG) was held in Lisbon, Portugal, May 7-8, 2016, as a conference satellite of Eurographics’16. MIG 2015 has been originally planned to happen in Paris, November 15th-17th. But due to the terrible events in Paris on November 13th, it was decided to cancel the conference. It was rescheduled to take place at the same time as Eurographics 2016. MIG 2015 is sponsored by ACM SIGGRAPH, with papers appearing in the ACM digital library.

Games have become a very important medium for both education and entertainment. Motion plays a critical role in computer games. Characters move around, objects are manipulated or move due to physical constraints, entities are animated, and the camera moves through the scene. Even the motion of the player nowadays is used as input to games. Motion is currently studied in many different areas of research, including graphics and animation, game technology, robotics, simulation, computer vision and also physics, psychology, and urban studies. Cross-fertilization between these communities can considerably advance the state of the art in this area. The goal of the Motion in Games conference is to bring together researchers from these various fields to present the most recent results and to initiate collaboration.

For 2015, the conference received 78 submissions. The original conference program consisted of 46 papers (18 long and 28 short) and a poster session. Each paper received three reviews from an international program committee of 52 members. The event was accented with two high-profile speakers from industry and research: Robert W. Sumner, Disney Research Zurich; Jean-Paul Laumond, LAAS-CNRS, France. 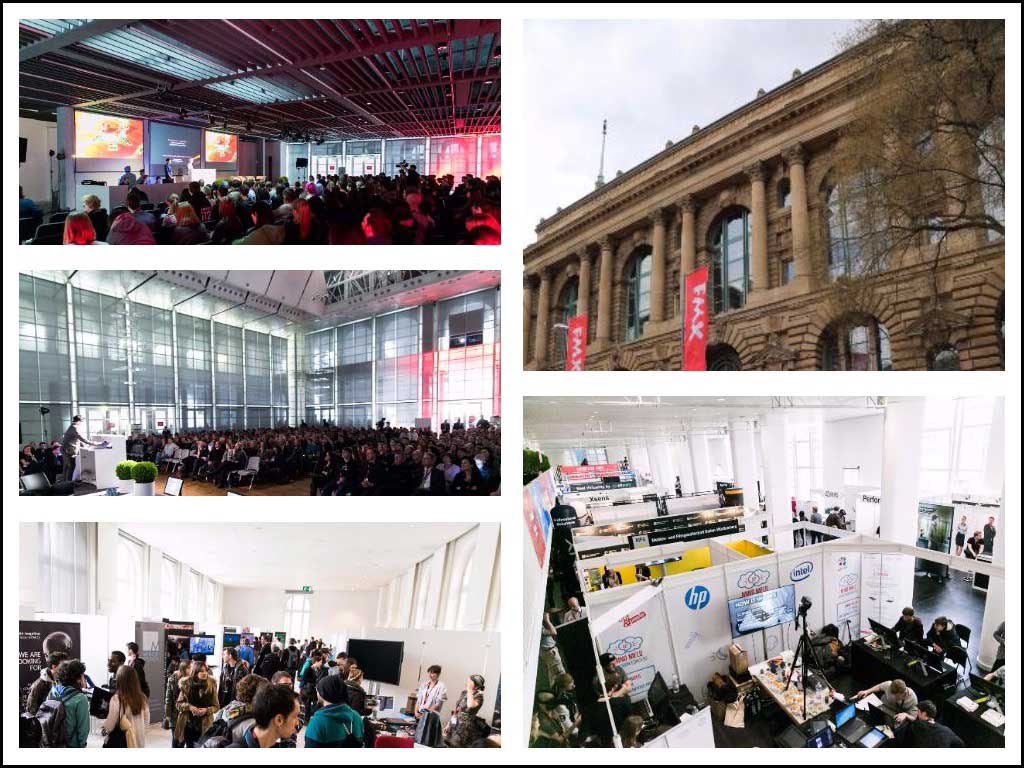 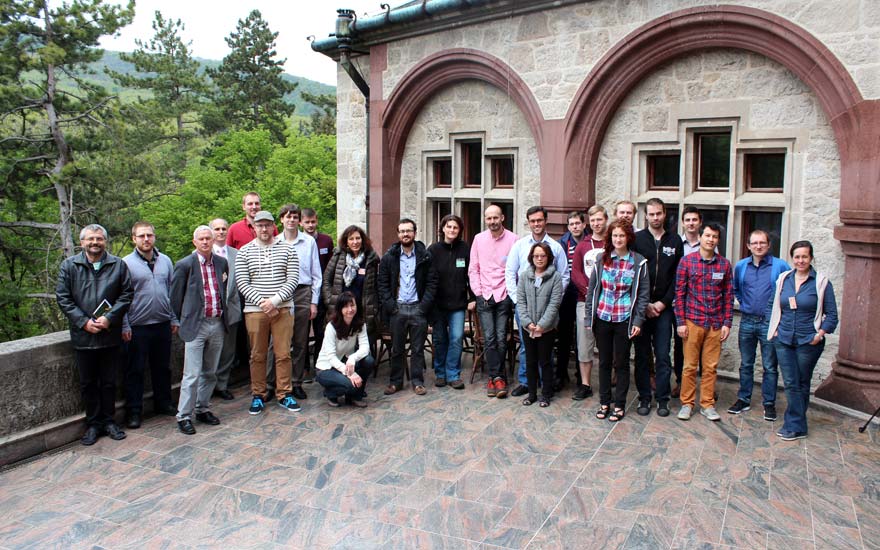 Spring Conference on Computer Graphics is probably the oldest regular annual meeting of computer graphics in Central Europe. It follows a long tradition of disseminating results through accepted papers in many areas related to computer graphics, with topics ranging from shape modelling to rendering, computational geometry, visualization and animation, to name a few.

This year is the second time the conference is associated with the Computers & Graphics Journal (C&G). Out of 22 submissions, we could conditionally accept two for Journal publication in a Special C&G Section. An additional 11 papers were accepted to the regular conference program, after a rigorous two-stage review process, in which each submission was reviewed by at least three different experts from our International Program Committee. Together, the accepted papers make up an exciting combination of computer graphics and visual computing technologies. Two short papers, posters and a selection of exciting invited talks complete the program. In particular, we have this year three outstanding invited speakers: Daniele Panozzo from New York University in New York with a talk on recent advances on Generalized Tangent Vector Fields; Franca Giannini from CNR-IMATI, Genova, Italy with an overview of the product development process for the specification of industrial styling products; Remco C. Veltkamp from Utrecht University, The Netherlands, with an overview and analysis of 10 years of Shape Retrieval Contests. As in last year, the SCCG’16 programme features invited Journal papers published in the C&G Regular Technical Section, which have not been presented elsewhere for oral presentation. 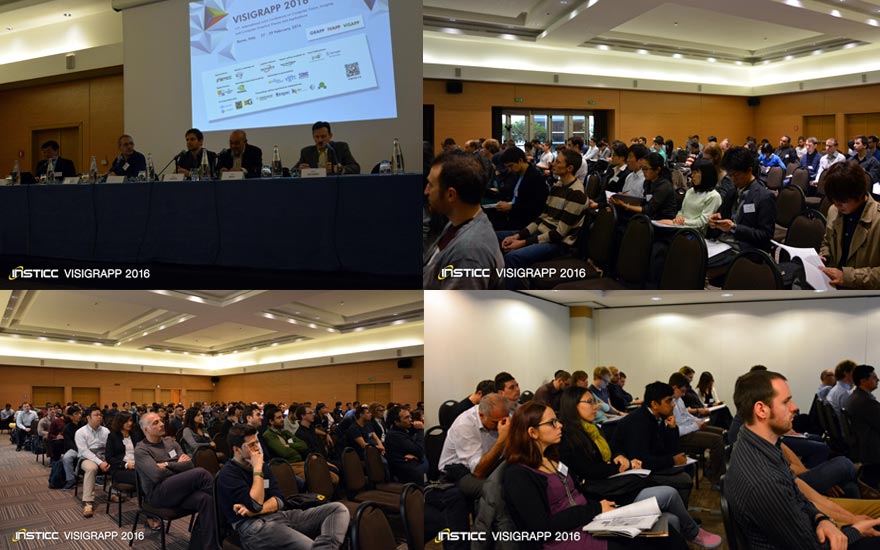 Last year, GRAPP received 48 submissions. After a strict selection process, the GRAPP program included 12 papers as full papers (25% of submissions) and 6 as short papers (13% of submissions). Additionally, 17 papers were accepted for poster presentation. With these acceptance ratios, GRAPP 2016 continues the tradition of previous conferences, a quality conference with high caliber. The best papers of GRAPP will be invited to appear in a post-conference book that will be published by Springer in a CCIS Series book composed by a selection of papers from VISIGRAPP. In addition to the presentation sessions, GRAPP 2016 included four outstanding keynote lectures, which are relevant to today’s lines of research and technical innovation. These talks were presented by internationally distinguished researchers, namely:

The papers were organized in nine sessions covering the hot topics of the day, such as Animation, Simulation, Interactive Environments, Rendering, Geometry and Modeling as well as many other topics. The organizing committee included the VISIGRAPP conference Chair Prof. José Braz, Escola Superior de Tecnologia de Setúbal, Portugal and the GRAPP program co-chairs Nadia Magnenat-Thalmann, University of Geneva, Switzerland and Paul Richard, University of Angers, France.

Regarding the best paper award, GRAPP has recognized the paper, "Generating Straight Outlines of 2D Point Sets and Holes using Dominant Directions or Orthogonal Projections" from Melanie Pohl and Dirk Feldmann as the best paper of the conference. As the best Student Paper Award, GRAPP acknowledged the paper untitled “Fast Screen Space Curvature Estimation on GPU” by Martin Prantl, Libor Váša and Ivana Kolingerová as the best student paper presented at the conference.

The best PhD Project Award was given to Hoa Nguyen and Paul Rosen with a paper entitled “Data Scalable Approach for Identifying Correlation in Large and Muti-dimensional Data.”

After a successful 2016 edition in Rome, GRAPP 2017 will be held in Porto, Portugal from February 27 to March 1. For more updated information, please visit the GRAPP 2017 website. 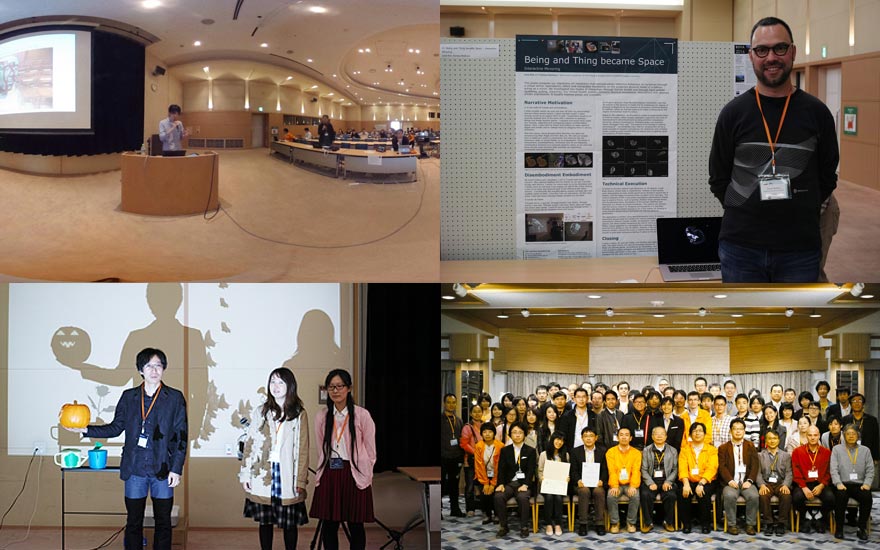 Overview: The 14th ACM International Conference on Virtual Reality Continuum and its Applications in Industry (VRCAI 2015) took place from October 30th to November 1st in Kobe, Japan. The conference was sponsored by ACM SIGGRAPH, and co-located with SIGGRAPH Asia. VRCAI 2015 received 32 full and short paper submissions, and of those, accepted 15. Posters and demos drew a lot of attention, with 28 accepted submissions from four countries. Collaboration with SIGGRAPH Asia resulted in five invited posters appearing at VRCAI from SIGGRAPH Asia, and three VRCAI poster selected to be re-presented at SIGGRAPH Asia 2015.

Access the proceedings of VRCAI 2015 in the ACM Digital Library

Overview: Approximately 100 people attended CGI'15, most from universities and research centers. The audience for CGI '15 was diverse, with attendees hailing from a wide variety of countries all over the world. In total, 234 submissions were received from more than 30 countries. Of those, 26 papers were selected for publication in a special issue of The Visual Computer, and nine others we chosen for publication in a regular issue of the same journal. The papers of the special issue, and those of the regular issue, were all presented orally during the conference. In addition, 19 short paper and seven posters were accepted for presentation during the conference. There were three keynote speakers at CGI '15, each invited to talk about their noteworthy research. 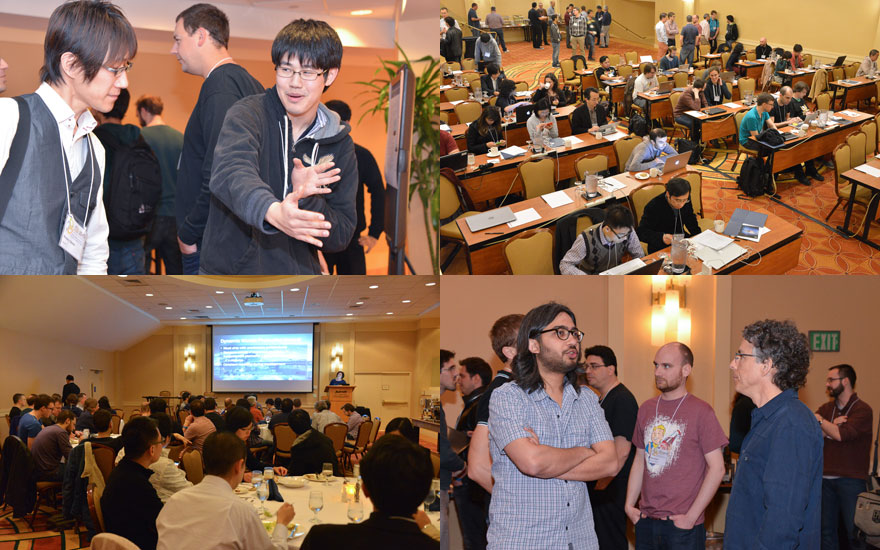 Overview: The 19th ACM SIGGRAPH Symposium on Interactive 3D Graphics and Games was held back-to-back with the Game Developers Conference, in the interest of maintaining the high level of academia-industry interaction present at i3D. The 2015 program consisted of 15 papers selected by a rigorous peer review process from amongst 41 submissions. The 2015 symposium continued its collaboration with IEEE Transactions on Visualization and Computer Graphics, with a selection of i3D papers being invited to submit extended versions to a special issue of TVCG. In addition, the symposium partnered with the Journal of Computer Graphics Techniques, inviting five papers originally published in JCGT to present at the i3D plenary session. A selection of i3D papers were invited to submit extended versions for publication in JCGT.

Access the proceedings of i3D 2015 in the ACM Digital Library