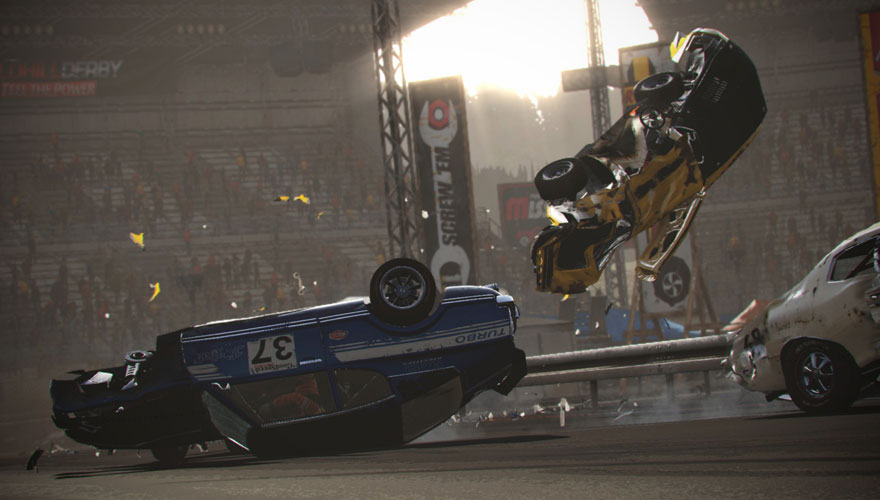 Ask any serious gamer about some of the coolest developments in the field, and you’re bound to run across Bugbear Entertainment’s “Next Car Game.” Bugbear is best known for its “FlatOut” game series, which is much in the same vein as their latest creation — a series that fills the memories of gamers with scenes you might think resulted from placing a derby car in a very large blender. Now, the spiritual successor to “FlatOut” continues the tradition by implementing various new technologies to create a conglomeration of beautiful carnage.

The main component behind the graphical finesse (or lack thereof) in “Next Car Game” is the deformation of vehicles placed in the game engine. Plenty of other games have had this idea — but, not to this degree; contrary to projects such as BeamNG, which focus more on the realism of collisions, Bugbear has decided to make everything look a little “prettier.” The game engine used to meld cars into the shape of whatever they crash into is called ROMU — the very same property used by Bugbear since 2000, though it now likely does not resemble the original product very much. The name ROMU, a developer explained, is Finnish for “scrap, junk, or wreck.”

Soft-body simulation is utilized for most of the vehicle destruction, with additional “plates” added to the outermost regions to more closely simulate what would happen in a real collision. The bending and buckling of the chassis is handled by this component of ROMU, while the objects on the car more easily detach themselves (though they are also subject to deformation, in the meantime). With the advent of faster processors, it is that much easier to provide a higher level of detail — at a faster rate — than in times past, and the result is astonishing.

If Bugbear were to stop at exactly the point that they’ve been to before, this new — albeit “spiritual” — successor to “FlatOut” would be flat and predictable. Realizing this, the development team continues to implement additional features, never overlooking graphical fidelity. There is much to explore in “Next Car Game” — the car is handled differently if it’s a “plane on a plane” or if all the tires are simulated individually, for example. The game includes numerous graphical touches that enhance its realism, such as smoke rising from the tires when the vehicle drifts around an opposing car, and the rear bumper rattling and springing if it’s partially damaged.

New additions are announced on the Next Car Game Blog fairly regularly. This month, developers spoke about upcoming additions to the game: “First and foremost of future additions is reworked tire physics,” one Bugbear developer wrote. “It’s no small thing, for the tire physics affect every single thing in the gameplay – the way your car handles is tied to the tires, the crashes, slides, swerves… everything.”

At the same time, physics can only explain so much about a game that looks eqully impressive from a still image. The product contains much of what might be expected from a commercially produced game: anti-aliasing, dynamic lighting, particle systems, tactile usage of bump-maps and usage of photographic material as often as possible. The full roster of technologies used might be hard to keep up with, but nobody who plays games regularly (and has a sufficient graphics card) is likely to complain.

The development of “Next Car Game” was launched by a KickStarter campaign, and the game is clearly devoted to its fans. Which is a good thing: the KickStarter development model is not new, and the result of not holding up to one’s promise can be catastrophic. Luckily, Bugbear seems up to the challenge, delivering a stunning product despite the fact that it isn’t even complete, yet.