Yes, This Gorgeous CG Short Was Made by Students 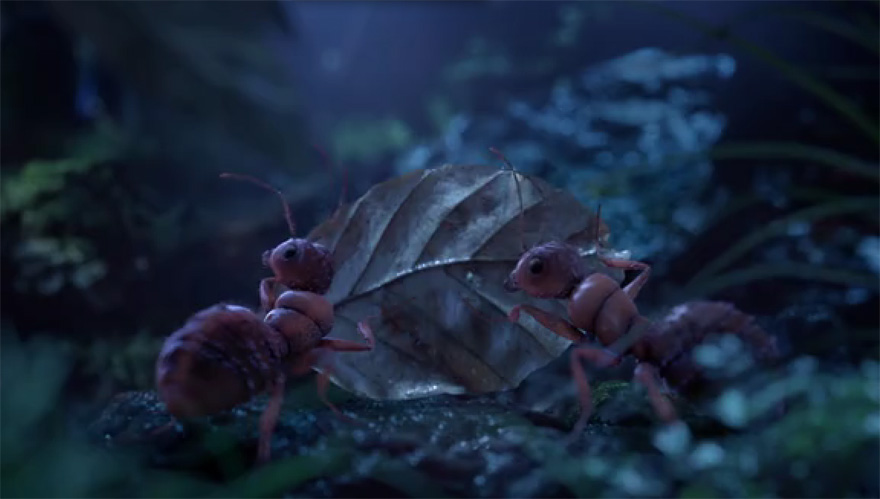 These days, student films are not in short supply. An increasingly large number of schools offer programs in computer animation, and sites like Vimeo and YouTube are teeming with student films — some of which rival those of major production studios in terms of quality (though typically not in length). A notable addition to this ever-growing list of artificial eye candy is "Rugbybugs," a short trailer made by German students enrolled at the Filmakademie Baden-Württemberg. The film was produced for the 2014 FMX (Film and Media Exchange) conference, and was so well received that it went on to win a Visual Effects Society Award for Outstanding Visual Effects in a Student Project. "Rugbybugs" was directed by Carl Schröter, Martin Lapp, Emanuel Fuchs, Fabian Fricke and Matthias Bäuerle, and produced by Alexandra Stautmeister and Anica Maruhnand. We spoke with director Carl Schröter about the project, the finished animation, and how everything came together.

How does it feel to be a VES award winner?

To be honest, it’s an amazing feeling. It was a huge honor just to be around the top names in VFX — but going up on stage and accepting an award was simply incredible. We even got the chance to meet some of our amazing competition in person! All in all, we had a blast in LA, but now everyone is already secretly thinking about bigger and better ideas…

Did you have any idea that your film would be so successful when you were creating it?

Of course everyone was hoping for the film to be successful, as with every project. But we would had never dreamed about winning an VES award or that we'd even be nominated. The first sign that we were on the right track came with the confirmation that the FMX selected our film to be the main trailer for the 2014 conference. After that things just kept getting better!

You've probably viewed your film quite a bit since its creation. Now that you've had time to think about it, are there any changes you would make?

Of course there are many things that we would change, now — mainly, tighter integration and a few bits of animation here and there. In the weeks after the deadline, it seemed like new flaws popped up with every viewing. But, like every project, it’s a matter of time, and by now we love “Rugbybugs” for what it is.

What was the largest difficulty you encountered while producing the film?

There are actually two things. We had a team of 5 directors on this project. That means lots and lots of talking to get everyone on the same page and to agree on the same things. But we got used to this, and ended up being pretty efficient in making decisions. Another difficulty we had to overcome was to initially convince the school and staff that we could pull off what we had planned. But after the first tests and a detailed animatic, everyone was on board.

What was the best part about producing the film?

By far the best part of the production was to build the miniature forest sets. Gathering all the materials, working with zoos and coming up with creative solutions to create a lush forest floor in the middle of winter was a fun challenge. Also, combining CG and self-built sets is a very rewarding experience.

Producing content is hard. Was the working pace relaxed, or was there a sense of urgency?

Before it was internally announced to be the next FMX trailer we had a different deadline, which was much earlier. We had to push quite hard to meet all the requirements. After that, everything went a lot smoother, thanks to our great producer-duo. A solid schedule kept our weekends free of work until we entered the final crunchtime. All in all, it was rather relaxed.

Are there any tools you wish existed that would have made creation of the film much easier?

I would have loved to use Nuke Studio on the project. Back when we started “Rugbybugs”, we used the first version of Hiero to create and maintain our edit. It lacked a lot of features we needed, though, so we ended up creating scripts and workarounds ourselves. Today, assigning shots, keeping a up-to-date edit and managing versions is a lot easier.

Did you play around with other concepts before "Rugbybugs" was firmly established?

There were quite a lot, to be honest. In fact, we started with an even bigger team and developed a little tool, which randomly connected story blocks. That tool turned into the base idea of the ITFS 2014 trailer “Plotomat.” After some space stories and robots (of course), the idea for “Rugbybugs” finally came to our minds.

Where do you see yourself in a few years, ideally?

That’s always a tough question to answer. For now, everyone on the team focuses on their respective diploma projects. We often loosely play with the idea to launch a company ourselves. But first, most of us will either join bigger studios to work on bigger scale film productions, or freelance in the commercial world.