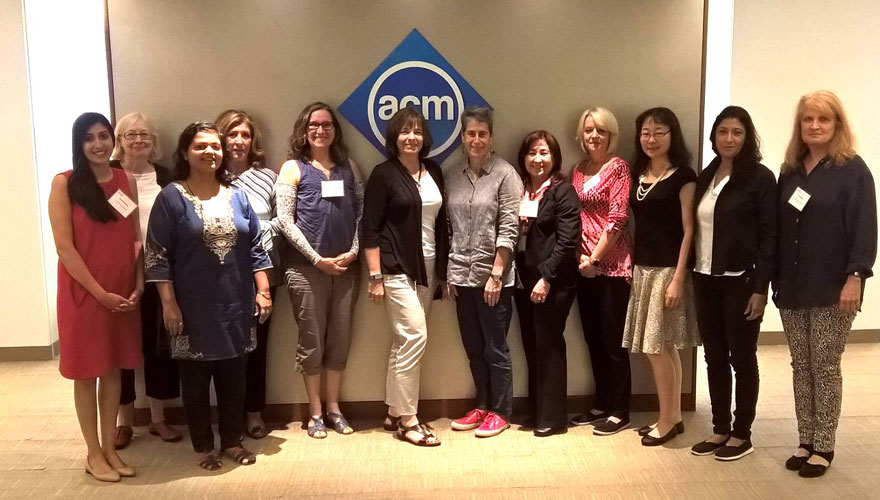 By Aruquia Peixoto. Edited by Jessica Sommerville and Diana Arellano.

In mid-June, I traveled to NYC for the first time. The trip, however, was not for a vacation. Instead, I was fortunate enough to attend the Association for Computing Machinery's Council on Women in Computing (ACM-W). The ACM-W provides student scholarships, organizes Celebrations of Women in Computing, and has chapters all around the world. In order to participate in this association, all an ACM member needs to do is check the box for ACM-W when joining or renewing their ACM membership.

For quite some time, ACM-W and ACM SIGGRAPH have been trying to find the way to build a bridge between both organizations and create a synergy that could benefit both parts. Thanks to the work made by the ACM SIGGRAPH International Resources Committee (IRC) in highlighting the work of women in computing, this year ACM-W approached our committee to have one of its representatives as SIGGRAPH liaison in their yearly council meeting. As a member of the IRC, I was chosen to attend the council meeting in that role, with the intention of developing the opportunities for working together and expanding our activities through various channels.

Within the field of Computer Graphics, as well as in many other different industries, the number of women is far fewer when compared with the number of their male counterparts. This disparity only increases when we look towards the more technical areas and positions within Computer Graphics. As an assistant professor in a technical institution in Brazil, I have seen this over and over throughout the years. For this reason, we as a committee believe in the importance of opening a space and giving a voice to the ACM SIGGRAPH female community.

As a result, we (the IRC) at SIGGRAPH have organized the panel “Women in CG” since 2014. Last year we opened this space in SIGGRAPH Asia, where we held the session “Women in CG” and additionally “Girls in STEM”, the latter in collaboration with the SIGGRAPH Asia Symposium on Education. While the Women in CG meeting focuses on the questions of students that are entering the professional market, and also professionals that are developing a career, the Girls in STEM looks towards the young students that will enter the undergraduate courses in technical fields.

The first day was dedicated to the reports of what was developed in the last year, where every council member reported their results. The two invited members were also invited to talk about their work. In my position as SIGGRAPH liaison, I reported on the meetings that have been held at SIGGRAPH and SIGGRAPH Asia. I also proposed that ACM-W should be present in the different SIG’s conferences through panels and workshops, making the connections among the women attending the conferences with ACM-W, and how those connections can be maintained when they come back to their institutions.

The second day was about what actions should be developed in the next year, and at the end of the meeting, the Vice Chair Jodi Tims and the Chair Valerie Barr invited me to be part of the ACM-W Council to develop the connections between ACM-W and the SIG’s Conferences. This is a real honor that only motivates me to continue my work with the IRC, ACM SIGGRAPH and the whole SIG community.

I would like to thank Valerie Barr for her support to the IRC in the past years, for opening the ACM-W doors to have an article published in their newsletter (you can read the article here), and for the warm welcome and support that she and her team gave me during the ACM-W Council Meeting. Also, thanks to Alain Chesnais (ACM past President, ACM SIGGRAPH past President, and long-time volunteer), Jeff Jortner (ACM SIGGRAPH President) and Barbara Helfer (ACM SIGGRAPH Communications and Membership Chair) for their support in connecting with ACM-W.

This year's "Women in CG" panel at SIGGRAPH will take place on Tuesday, August 1 from 1:00 pm to 2:00 pm in the ACM SIGGRAPH Theater, South Lobby.