The Fun and Fiery Opening of Thor: Ragnarok 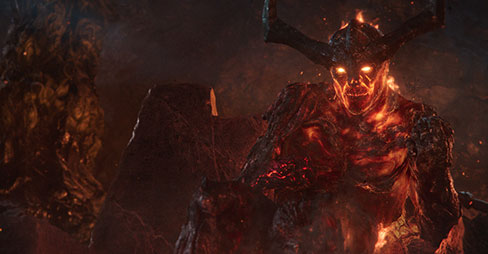 Thor: Ragnarok opens with Thor (Chris Hemsworth) trapped by the fire demon Surtur. But not for long, as the God of Thunder soon battles the creature (and several others, including a dragon) before escaping back to Asgard.

The sequence begins in a comical fashion with Thor wrapped in chains while he banters with Surtur, who is sitting on a throne. While the creature would be voiced by Clancy Brown, director Taika Waititi actually performed Surtur on set in a motion capture suit. This way, the director was able to play around with the performance, and in fact went somewhere different with it rather than have Surtur be all-powerful right from the get-go.

“Taika thought it would be much more interesting if Surtur was actually like a slightly lesser version of himself, which gives us somewhere to go at the end of the film when he gets the eternal flame and actually is restored,” says Morrison. “He's like, ‘I’ve got it. He's Richard III.’”

Although Surtur is a fire demon, his desired appearance was not to be completely fire-covered from the beginning. So VFX artists built in a bones and muscles structure, albeit charred, that was made of plasma. “Then we had this idea to build up these layers of slag, like a magma style crust,” outlines Morrison. “The idea is like a volcano and you've got streams of lava that are pouring out that if you leave it for a while or it's cool outside then you will get these crusts.”

“We did go down a path without the ‘slag’ component, however, getting a readable facial animation from hot magma and gas was proving tricky in defining a character,” notes Method’s Hellen. “Slag was the answer. For the face we needed to develop a way for the slag to move without stretching and squashing. We used Houdini to create a cracked skin broken up enough to allow facial movement; it looked like a face cracked up into 1000 pieces. It allowed the face to move but the individual pieces did not bend or stretch, only the cracks in between opened and closed.”

At one point, Thor is attacked by hordes of fire demons. Hemsworth was filmed taking on various stunt doubles, some in motion capture gear. VFX artists hand-animated the demons and also pieced together footage and mocap that been shot.

“It’s an interesting process working with Marvel,” says Hellen. “The shoot component is a bit like gathering elements that may or may not end up in the final product. There were a number of key shots that stayed in the final cut so they acted like pillars to build out from. Production provided a vast amount of mocap, doing all manner of running, crawling, jumping, which we used for our background crowds.”

Eventually, Thor tackles a dragon which even manages to (partly) make its way to Asgard. The VFX team started with a model provided by Marvel that had basic proportions and some details such as the whiskers. “Unlike most dragons,” says Hellen, “she doesn’t have wings, and is propelled by rocket-type thrusters emitting from gills down her rib cage.”

“Other details changed quite a bit along the way,” adds Hellen. “She started out coming from the same type of finish as the fire demons and Surtur. In her case she had a rough burnt charcoal type outer surface, a hot molten surface underneath, with lots of fire down the spine and along parts of her body. These ideas worked well with the rough burnt charcoal look. However, she was looking a little too complicated, we weren’t getting a good read of her form, so we tried a more leathery finish, which helped get a better read of details like muscles under the surface.”

Only the dragon’s severed head comes through the bi-frost into Asgard with Thor — from a VFX point of view, it was simply cut off from the body. “Rigging was relatively straightforward given the head was only in a few shots and only had to slide along the floor the eyes roll forward and the tongue flopped out,” notes Hellen. “Most of the deforming was done post animation as a shot sculpt. The main difference was the eyes. Pre-beheading the eyes are on fire, post-beheading they look like fairly normal eyes. We did go through a pretty comprehensive trial of all manner of eyes, skin and horn looks before settling on what was in the final film. Most of the decisions were based on what allowed the gag to work best. Then add goo. Lots of goo.”

All images and clips copyright &copy; 2017 Disney.  All Rights Reserved.