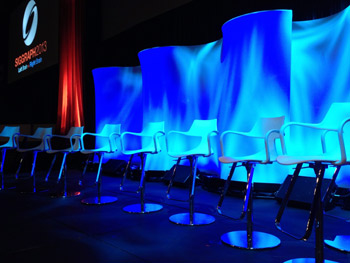 The day was busy as attendees raced from session to session. The Exhibits Fast Forward Preview and The Academy of Motion Pictures Arts and Sciences Marc Davis Lecture Series Keynote Session: Giants’ First Steps were particular crowd favorites. In the case of the Keynote, floor seating reached capacity so some attendees piled into the Arena bleachers to see nine distinguished animation film directors share their experiences on their complex paths to filmmaking success.

The evening provided no shortage of activities for attendees; examples include the opening showing of the 2013 Computer Animation Festival’s Electronic Theater, the 26th Anniversary of the CG Show/ Sake Barrel Opening and the official Networking Dessert Reception.

Birds of a Feather: Virtual Reality Discussion and Showcase

This session kicked off with a brief introduction of Virtual Reality that touched on some of factors that will determine its success. One of the concerns that came up was how to address simulator sickness. After the introduction, the presenters provided an overview of their VR reality work. The Omni by Virtuix was of particular interest as attendees stood up to get a better look. After the presentations, attendees were encouraged to use the remaining hour of the session to come up and experience the demos for themselves.

This course presented by Craig Caldwell talked about story and its structure. It began with an introduction that defined dramatic story as a “sequence of connected events” which lead to a conflict that forces the character to make choices, builds to a climax with a surprise and results in a change. Caldwell explained that every story has a beginning, middle and end, but not necessarily in that order. He mentioned the importance of having an ending in particular, because the ending gives meaning to the film and the lack of an ending will make the audience angry.