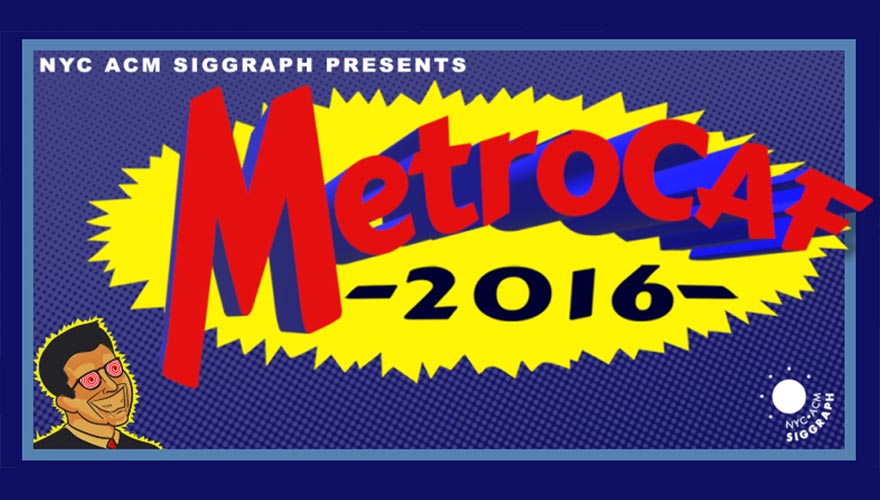 Started in 2003, MetroCAF has grown into the most important local festival of its kind. It provides an exciting opportunity for all students in the NYC metropolitan area to show their work, not only to their fellow students, but also to industry professionals. This year's festival features 29 pieces from 6 metropolitan-area schools. A trailer can be found on the NYC ACM SIGGRAPH YouTube channel.

NYC ACM SIGGRAPH will also be presenting the annual Rick Barry Outstanding Service Award at this year's MetroCAF. Rick was known for his tremendous work on behalf of students everywhere. His work with Pratt, NYC ACM SIGGRAPH, and his service as the ACM SIGGRAPH Education Committee Chair had a widespread impact on students and educators. Rick was the second Chair of MetroCAF, and helped to establish it as the premier NYC-area college computer animation festival. This year's recipient of the award is Lucien Harriot, a long-time member and volunteer with NYC ACM SIGGRAPH.

MetroCAF 2016 will take place on Friday, September 23, at the New York Institute of Technology (NYIT) Auditorium On Broadway at 1871 Broadway. Admission is free to NYC ACM SIGGRAPH Members and faculty, students, and staff of NYIT. Tickets to MetroCAF 2016 may be purchased in advance, or as availability allows, at the door.