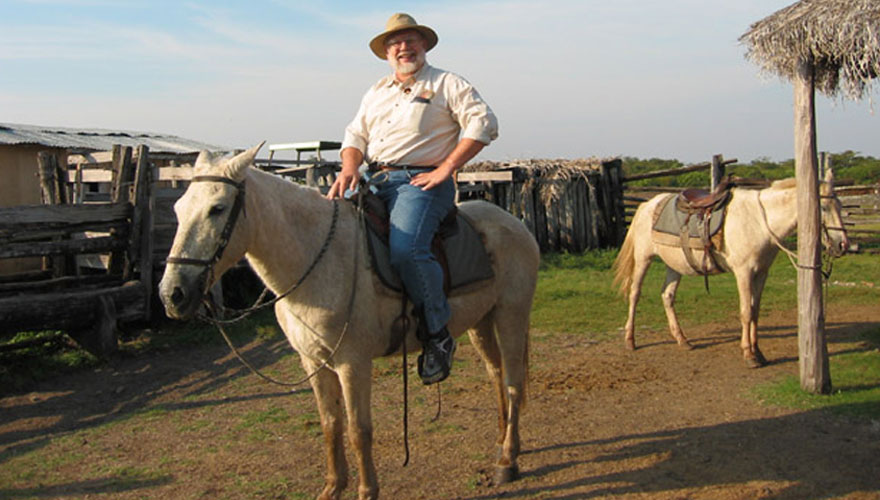 This week, we were greatly saddened to find out that longtime ACM SIGGRAPH volunteer Steve Cunningham passed away. Below is a tribute to Steve from ACM SIGGRAPH Communications Chair Barb Helfer. Steve will be sorely missed.

It is an honor to write this tribute to Steve Cunningham who was a friend, colleague, professor, scholar, author, husband, father, and a longtime supporter of the ACM SIGGRAPH and Eurographics communities. In whatever role we knew him, Steve stood apart as someone who was passionate about those in his path and the discipline of computer graphics!

I first met Steve when he was ACM SIGGRAPH Chair, and as a newly chosen member of the 1997 Conference team, he invited me to the ACM SIGGRAPH Executive Committee Meeting. Through that meeting and subsequent shepherding, he stirred my “service gene” and has made continual volunteering to the community a personal need. To Steve, computer graphics education and service to the community was not only his vocation, but his avocation as well, and this gift is reflected through dedication to the organizations he served and the many people he nurtured who are in service to the communities he supported.

Steve was chair of our organization, with Alain Chesnais as his vice chair from 1995 through 1999. Alain had the following to add, “Steve was my mentor and guide as I learned what it takes to prepare to become ACM SIGGRAPH President in 2002, then later ACM President in 2010. Steve taught me what it means to lead a uniquely diverse community in the most respectful and attentive manner — and why that is so important in a volunteer-based organization. I could never have been effective in my subsequent roles without Steve's thoughtful and insightful guidance. I learned it all while serving as his vice chair from 1995 through 1999."

Steve’s involvement in computer graphics began in 1976, when he received National Science Foundation funding to develop a graphics capability for teaching mathematics and statistics. Cunningham was a former chair of SIGGRAPH's Education Committee, 1983-90, where he was a significant contributor to development of the computer graphics curricula in computer science, and led and developed computer graphics education workshops for both the ACM SIGGRAPH and Eurographics communities. He was instrumental in creating an education directory and career handbook for computer graphics professionals. He was also a major contributor to SIGGRAPH's publications, where he created SIGGRAPH's first electronic publications and implemented other new publication technologies. He pioneered new publications, including the conference Visual Proceedings, and elevated smaller conference proceedings as mainstream publications. In 2004 he and soon to be wife, Judy Brown, were award the ACM SIGGRAPH Outstanding Service Award for their outstanding achievement in computer graphics and interactive techniques. For those of us who knew both Judy and Steve, it was fitting that they received the award together because so much of their dedication to the organization and the community was jointly shared and supported.

He served on the Eurographics Executive Committee and on the Eurographics Executive Board as Chair of the Education Board. In 1998 he was elected a Eurographics Fellow. He also served on the Board of ACM SIGCSE, the Special Interest Group on Computer Science Education and on the Board of Governors of the Mathematical Association of America. His interests were primarily in computer graphics education and computational science, and he wrote and spoke widely on education and other subjects. He co-authored or co-edited six books on graphics-related subjects. His latest book, co-authored in 2011 with Mike Bailey, was Graphic Shaders: Theory and Practice published by A K Peters, Ltd.

A graduate of Drury College with a BS in mathematics, Cunningham received an MS and PhD in mathematics from the University of Oregon and MS in computer science from Oregon State University. Steve served on the faculty of the University of Kansas, Birmingham-Southern College, and California State University Stanislaus where he was named the Gemperle Distinguished Professor of Computer Science. He was a Visiting Scientist at the San Diego Supercomputing Center and was a program director at the National Science Foundation's Division of Undergraduate Education from 2003-2005. His most recent academic position was as Noyce Visiting Professor at Grinnell College.

In addition to his devotion to his work and to the improvement of computer graphics education locally and globally, Steve always found time for his colleagues, his friends, and his family. Steve was a caring and beloved man, cherished by his friends and family. He will be missed by many, but never forgotten by those whom he mentored and were blessed to have known him.