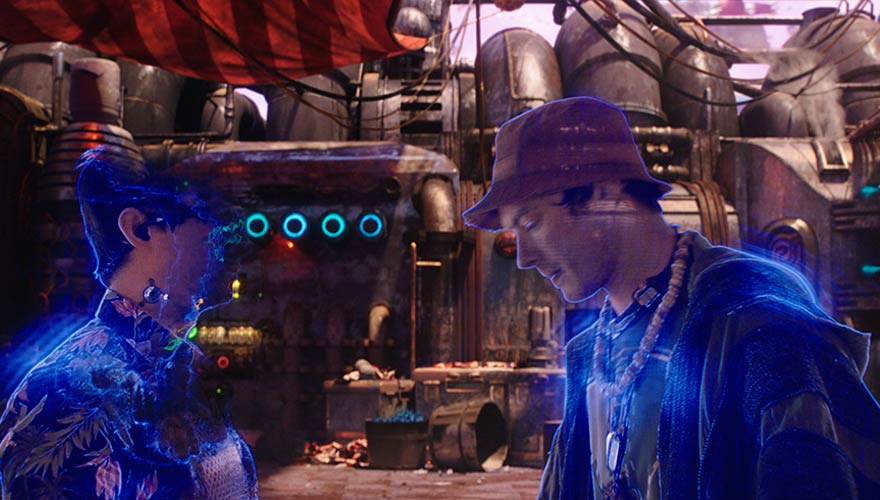 Perhaps the most talked about sequence in Luc Besson’s Valerian & the City of a Thousand Planets is the interdimensional journey undertaken by the title character through a merchant world. Here, Valerian (Dane DeHaan) dons special goggles that enable him to be in two ‘worlds’ at once — a desert and the market world — as he attempts a secret mission.

ILM led the visual effects effort on the scene, with its Vancouver office the main contributor under visual effects supervisor Philippe Rebours. Hybride also worked on the sequence. Spark CG Society found out more in this Q&A with Rebours.

Watch a portion of the sequence as Valerian stumbles into a toy shop in the merchant world.

Philippe Rebours: We received the script and then a few of us from ILM went down to LA to meet Scott Stokdyk, the overall visual effects supervisor, and Sophie Leclerc, the visual effects producer, and Luc as well. We saw the sequence the way Luc shot it with his students. He has a school in France next to his stages, and he took his students and for a couple of weeks they shot the entire sequence on the stage. They were just using tables and whatever they could find and would walk around and act it out.

Then Luc took that and edited it and showed that to us. Interestingly, I remember being there and it was a 22-minute sequence, and I was, even then, I was completely into it, even though there was no environment. I was completely into it and it felt like a Luc Besson movie. The position of the camera that he chose, the lenses, the movement. I told him it was very interesting because right away you could feel his signature.

The good thing is, Luc also did his homework. He edited the sequence and then he would say, ‘Okay, that’s what I’m going to shoot,’ and shot by shot we could define and we coloured each shot or we put a dot on it to say, ‘This shot is in the desert,’ and, ‘This is shot in the marketplace,’ because the sequence happens on two worlds, right at the same time.

When it came time to sort of show Valerian in both worlds at the same time, in that sort of virtual reality look, how did you approach that side of things?

When you buy something in one world, the idea is you put on a glove, you see the other world, you walk in the compound, it’s like you’re walking in the other streets. You touch the things, you feel them with the glove and then when you want to buy them you buy them and you go somewhere where those transmitter boxes are and what you bought appears in your world. It’s being transferred from one world to the other one. What Valerian does is he puts his hands with a gun in one of those boxes and transfers his hand and the gun in the other world, so he’s invisible in the merchant world but his hand and gun appears.

Then at some point, he cannot retrieve his hand and so he’s being chased slightly invisible. So you have those shots where you only see the box with his hands running around, and all the other tourists are blue. All the aliens that are in the merchant world are regular merchant world, but that means that those aliens are not seen in the desert world. Interestingly, with the cuts, it all works. You don’t question it, which I think is due to the good editing.

How were you tackling those shots that just showed his hand or the gun?

Philippe Rebours: Well, it depends on the shots. So, you have the shots where we’re on set, let’s say, into Igon Siruss’ store and that was a set. There we shot multiple passes. We would replace the actor that was playing Igon Siruss with our CG creature. Then we had for some shots we had Dane there and the hand holding the gun and we used that as a reference. I mean, we used his take and his hands and the box that he was holding. In some cases, we replaced the box and the hand in CG. When it’s on the blue screen, when we were on the other world where, well, in the streets that were fully CG, we had a pass with Dane walking around so we had a good reference on the movement, and then we would replace it if we needed to. We either painted him out or just picked the hand and the box, or made the box and the hand CG animated. Then the interesting aspect is when he is in the desert, we painted out his hands and the gun because you wouldn’t see it there.

What were some of the visual effects challenges in making the two different environments — the desert and the market?

Philippe Rebours: For the desert, we were on set and it was in this huge stage. The desert world was defined by sand. Those rocks that were tilted in one direction, you imagine that it’s like rocks that had been pushed by the wind in one direction. We had some initial reference for the sky, but then we got a new reference which was from a commercial shown in France and it was basically cumulus clouds stacked on top of each other but all having different colors. That gave the full look of the desert, which was this yellow sand, blue sky, stones with multi-colored clouds.

Now, the other environment, the merchant world, we had tonnes of artwork representing the streets here, a street there, the canyon and all that. What we did in some of the shots is — it’s very subtle — but you could imagine that as the sun is moving, the awnings are moving with it so all the time the streets are in the shadows. We created all those details in a library of elements that we used to dress the set.

Also what Luc gave us was a lot of artwork of very specific stores. It was interesting because he wouldn’t say, ‘I absolutely want this one in this shot.’ He’d just say, ‘These are all the artworks that I like. Please use them. Choose the ones that you feel would work the best,’ and left us a lot of freedom.

Then he did the same thing with the aliens, there was tons of artwork as well, and there was also some that he chose from the comic book. Each time we did a creature, you do one but then you have to do variations as well. He would give us the initial information for the costumes, and then we would go and create variations on the costumes.

It’s interesting because sometimes I would say, ‘No, this is not working because this is not our universe.’ Even though there’s a lot of variations, there is a very specific look to the movie, and if you had too many very strong details everywhere, it might become another sci-fi movie. For example, Luc didn’t want any straight lines. You know when you’re on a street and you see the buildings and everything, it’s straight? He was like, ‘No, no, I don’t want that. I want round. I want them to be tilted, a little bit off,’ and I think that was true with the creatures as well. Most of them would very, fairly round, round shapes, or not too many angles. However, he absolutely wanted as well to have these very simple aliens, let’s say, that are like geometry shapes. A pyramid or a cube or octagon, that were flying around. 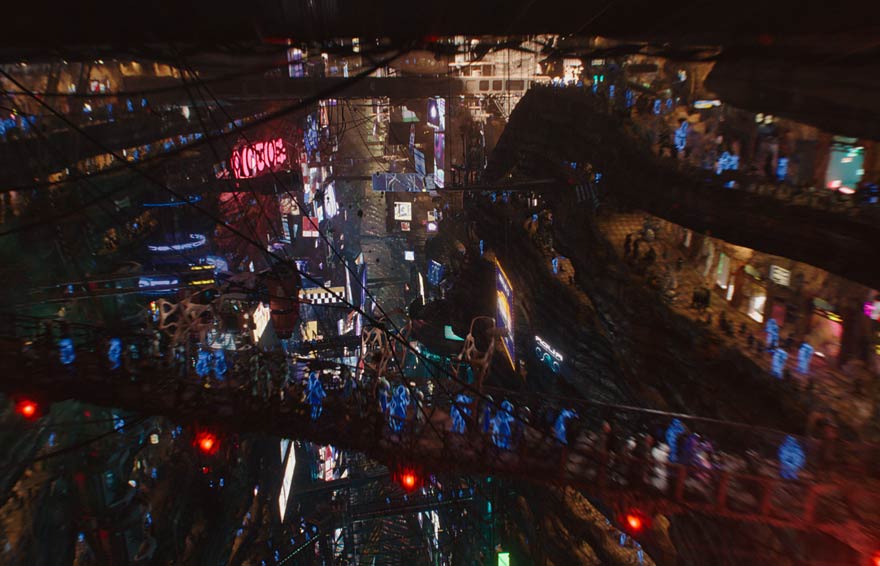 In terms of the huge environments and complex world of that market, were there any special tools or approaches that you were using?

Philippe Rebours: Our approach was kind of like LEGO, where you build pieces and assemble it together. Then what our generalist group was working in was Clarisse from Isotropix, and it’s great software because you can have a lot of geometry and a lot of set dressing. The library would be live in the scene in a sense, on the side, and then you could just choose and pick which one you wanted to set dress. For a big fly-through that we did, most of the set dressing was first done procedurally, and then when the camera goes closer, we enter a street, for example, there we went more manual and did a proper set dressing, or adding details here and there.

With the set dressing, you place the object and the object comes with materials and textures that were modeled, some by our generalist department but some by our modeling, digital modeling department, and so they were model and textures before and imported afterward. We had also a library of materials inside Clarisse so we could add more variations by switching these. For example, you have a vase and the vase was made of earth. Then you say, ‘Well, actually let’s switch that to a metal vase,’ and so you could switch the material like that.

All images and clips, copyright 2017 Entertainment One. All Rights Reserved.