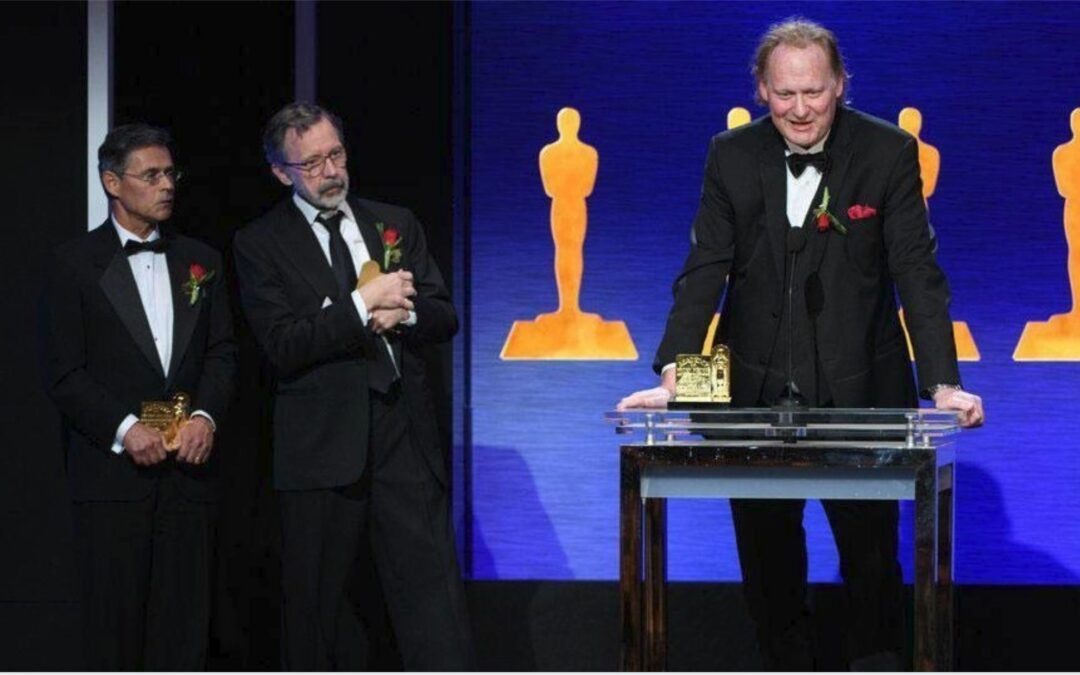 Pixar is synonymous with innovative computer animation, revolutionizing an industry that has brought moviegoers such hits as Toy Story, Cars and A Bug’s Life, films that have all received accolades for their breakthrough digital artistry just as much as their entertainment value. This awards season, Pixar cofounder Edwin Catmull and SIGGRAPH members and computer graphics pioneers, Tony DeRose and Jos Stam, have won a Scientific and Engineering Academy Award, for creating and expanding the fundamental mathematics behind the breakthrough graphics used in many of these popular animated films, and more. The methodology they’ve pioneered is now an industry standard for achieving strikingly realistic images on the big screen.

The Academy of Motion Picture Arts and Sciences presented the trio with plaques at the Feb. 9, 2019, awards ceremony held at the Beverly Wilshire Hotel. They were honored for their “pioneering advancement of the underlying science of subdivision surfaces as 3D geometric modeling primitives,” and the Academy noted that their advancements has helped “transform the way digital artists represent 3D geometry throughout the motion picture industry.”

This marked the second time the three awardees were recognized for subdivision surfaces. In 2006, the Academy honored their work with a Technical Achievement certificate. Indeed, their advancements in subdivision surfaces is quite a feat, one that has been fine-tuned and developed for more than 40 years.

Subdivision surfaces enables digital artists to automate the technique of smoothing out surfaces, and as a result achieve highly realistic replications of physical objects in film. The examples of surfaces are endless—from human faces and skin, to clothing, table tops, and car bodies.

While Catmull is credited in the field for the first proof of subdivision surfaces, throughout the decades, DeRose, senior scientist emeritus at Pixar, and Stam, a graphics researcher at NVIDIA, have worked on advancing and improving subdivision surfaces, directly contributing to the success of the technique used in film today.

Stam’s expertise is in the simulation of natural physical phenomena for 3D computer animation and in simulation of fluids and gases. In fact, this is his third Academy Award win, having scored a Sci-Tech award in 2008 for the design and implementation of the Maya Fluid Effects system, a widely used technology for realistically simulating and rendering fluid motion. In 2005, he also was awarded the prestigious SIGGRAPH Computer Graphics Achievement award, given to members for exemplary contributions to the field of computer graphics.

In the subdivision surfaces work, Stam is credited for essentially making the technique more accessible for artists. He devised mapping methodology that eliminated complex hardware limitations that had been challenging for digital artists in prior iterations of the system.

As a teenager, Stam drew caricatures, painted, and even got into air brush painting. His love for art informed his research as a computer scientist. So, he not only thinks in ‘1s’ and ‘0s’, he also considers the artist in the equation.

“I like art and I like math. In a way, they are not that different,” he said. “They are two ways to express your creativity within given bounds. In art you must work with physical tools like brushes, chisels and the computer! In math, your reasoning must make sense within a formal framework. Somewhat paradoxically art and math result from a balance between boundaries and creativity.”

When DeRose first introduced the use of subdivision surfaces in computer animated film it was for Pixar’s earliest shorts, Geri’s Game. Of the experience, he said it would not have been a success had he not worked closely with the film’s artists.

“It was that tight interaction that led to a lot of the improvements that we are being recognized for. Without sitting with the artists and understanding what they really needed, we wouldn’t be here today,” he said.

In subdivision surfaces, DeRose is credited for adding flexibility to the method and for improving the overall usability of the technology. For instance, he and collaborators devised an artist-friendly way to pick and choose when and where to add more sharpness to smoothed out surfaces. He also worked on adding shading techniques.

For DeRose, the Academy Award underscores just how far the field has come and celebrates the comprehensive mathematics that goes along with it. Still, countless math problems remain, and he is excited for what the future holds.


“New mathematics is being created all of the time,” said DeRose. “Some of the new mathematics being created is in response to problems that have come up in filmmaking and graphics. Yes, we’ve solved a lot in 30 years or so, but there are still a lot of problems to address, including coming up with principled ways to deal with the massive geometry as a result of the more and more realistic and grander effects we’ve been able to achieve. There’s a lot of data to approximate now.”

During his acceptance speech at the Feb. 9 ceremony, Catmull made a lighthearted reference to the past when he said that prior techniques for representing organic shapes and surfaces “really sucked,” and he knew then, when he first got into computer graphics, that this was the problem he wanted to solve.

“For me, this has been an incredible journey. I never could’ve predicted any of it,” he said. “It started 46 years ago with an idea. And sometimes it just takes a lot of really smart people working on it from different points of views, from different places, and a lot of patience, and if you do that, you can end up with something that works.”

Moviegoers may never know that complex geometry is behind some of the splashiest visual effects they’ve witnessed on the big screen, and frankly, that is the way computer scientists want it.

“I am sometimes blown away by what the artists were able to achieve with our software,” said Stam. “It’s like being a brush oil paint maker and looking at a Rembrandt … In fact, it is a sign of a work well done if the technology is hidden completely from the viewer. No one wants to see the ‘grip man’ holding the mic in a movie shot.”