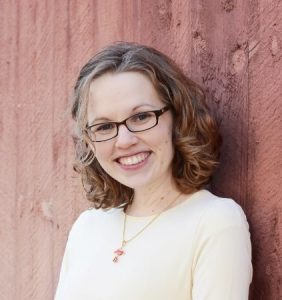 I’ve been the communications editor for the Cesium team for five years. I do everything from writing blog posts about our open source globe engine to editing documentation like the spec for 3D Tiles, the open standard for streaming massive 3D geospatial datasets. But my favorite part of my job is curating user stories of the Cesium community.

My first job out of college was as an editorial assistant with A K Peters, Ltd., where we published industry-leading books on computer graphics and mathematics.

Brigham Young University. I completed both undergrad and a master’s degree in English and rhetoric.

A K Peters sent me to my first SIGGRAPH in 2010. We held book signings, met with potential authors, shared our books, and reveled in the entire experience.  It was like nothing I’d ever attended.

Sitting in on a meeting with Patrick Cozzi and Wolfgang Engel. At the time, Patrick had just published his first book, 3D Engine Design for Virtual Globes. Wolfgang was an experienced author and editor of the GPU Pro series. As they discussed how to implement the rigorous expectations, deadlines, and peer review required to create a high-quality edited volume of cutting-edge techniques, what struck me most was Patrick’s enthusiasm and attentiveness in meeting this industry veteran. Little did I know then how quickly Patrick would progress in the field himself.

My senior capstone paper was on the portrayal of Aragorn and Theoden in both Peter Jackson’s and J R R Tolkien’s Lord of the Rings, and how the differences reflect the different mediums, times, and audiences of the works. I presented it at two conferences, including giving one talk in costume! While the graphics community focuses on algorithms that create the magic behind their work, it’s easy to forget that computer graphics is probably the most widely appreciated art form of our time, and is also a vehicle for conveying stories that are defining for generations.

Sir Joshua Reynolds. His essays on art theory, while decidedly eighteenth century, really resonate with me. I love the idea of seeking variations of perfection in the world around us and of striving to capture with art that ephemeral perfection we all recognize but never see.

In college I interned with a children’s magazine for a summer. When I ran out of editing work to do, I wrote my own submissions. The managing editor accepted more than 100 of my stories, which continue to appear in print.

When my grandmother was just 31, her husband died, leaving her with five small children. She immediately went back to school for a master’s degree and then a PhD, successfully rearing all her children while studying and working. Her independence, adaptability, and grateful attitude are qualities I aspire to.

Alice Peters of A K Peters is one of the best people I’ve ever worked for. She is brilliant, an incredible mentor, and has perhaps the greatest integrity of anyone I’ve ever met. Her graphics publications, including Real-Time Rendering, Fundamentals of Computer Graphics, and JGT introduced me to the world of graphics and some of the most influential people in the industry. 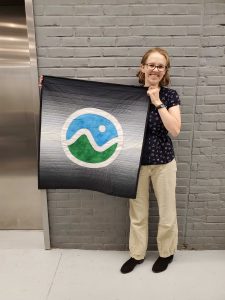 The day Cesium spun out as an independent company. I was so excited I even made a commemorative quilt of the logo. I enjoy working with our 3D developers to transform industries, from smart construction to aerospace to digital humanities. Seeing the Cesium platform grow and in turn strengthen open source CesiumJS is so gratifying.