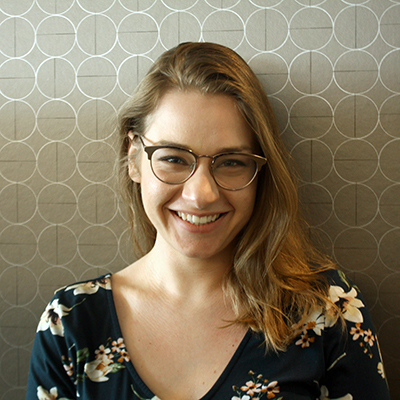 For the past two years, I’ve been a software developer on the 3D geospatial platform Cesium in Philadelphia, PA. There I’ve done 3D geospatial open source software development, work on open standards for streaming 3D, and various outreach among the open source, 3D, and geospatial communities. I’ve recently started project management for a new application applying our technology which has been a rewarding challenge.

I jumped right into Software Development as an intern at Thomson Reuters working on front-end development.

I studied at Drexel University in Philadelphia, PA where I received a BS in Computer Science with a minor in Digital Media. There, I pursued both technology and design, and dove headfirst into 3D through games.

I’d heard other students raving about SIGGRAPH at university, but I didn’t get involved until my professional career, when Cesium’s-now-CEO, Patrick Cozzi, suggested I present at the 2018 Carto BOF about the work we’ve been doing at Cesium.  I was nervous speaking to this audience for the first time, but the attendees were so welcoming and engaging!

Definitely when I first walked in the conference hall and the scale of everything hit me. The sheer number of people than I could have imagined and the atmosphere was so positive and enthusiastic!

While completing my undergrad at Drexel, a classmate and I formed a small company to release a mobile game. This was part of  an organization of which we were founding members, the Drexel Entrepreneurial Game Studio, that functioned like a small incubator for student game companies.

I’ve always been interested in the writing of Malcom Galdwell because of his in diverse topics of interests and ability to make unexpected connections between very different things. I think it would make for curious and engaging dinner conversation.

I’m a big fan of horror! Movies, games, stories – You name it.

This is a hard question! I’ve learned so much from everyone around me from my parents, to my friends, to my professional cohorts. But, as a “learn by doing” individual, I think I’ve learned the most from myself through the mistakes I’ve made and the lessons I’ve taken away from those experiences.

Patrick Cozzi encouraged me to speak on behalf of Cesium at the Carto BOF in 2018. He’s been an invaluable mentor in helping me to get involved with ACM SIGGRAPH, improve my communication skills, and in most of my professional career.

This year, I won the title Younger Geospatial Professional of the Year at the Spar 3D Conference where I was given the privilege of speaking during the keynote session. I was able to present a talk on “Why 3D?” for data visualization right before speakers from Disney and National Geographic!