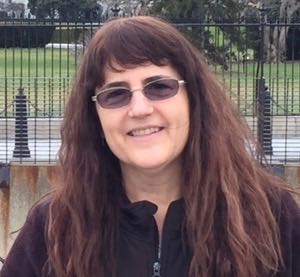 I am an experimental animator, digital artist, educator and do volunteer work for organizations. I create interactive immersive, interactive, animated installation artworks and visual music animations collaboratively with composer, Elainie Lillios. I work specifically with particle systems and dynamics to explore philosophical and psychological themes. My work is influenced by natural phenomena, environmental and cultural issues. I am currently a professor at Bowling Green State University in Ohio, USA where I teach interactive art, 2d and 3d animation, character design, compositing, and senior studio. Before that I taught at Syracuse University and the University of Oregon. I also do volunteer work for the SIGGRAPH Digital Arts Community Committee, am on the Board of Directors of ISEA International, and am a faculty advisor for the Bowling Green State University’s ACM SIGGRAPH Student Chapter.

My first job in the technology field was as a BASIC tutor and JCL programmer for a Harris 100 at Central Wyoming College. I was an Art Education student who accidently ended up in a computer programming class in 1984 and discovered that I loved it. I ended up triple majoring in Computer Science, Art Education and Fine Arts. In the 1980s, there was no overlap between art and computer science in my school and everyone thought I was crazy. The most creative thing I got to do in my CS classes was graph mathematical equations.

3. Where did you go to school?

Upon acceptance into the MFA program at the University of Oregon, Ken O’Connell, the Chair of the Art Department gave the new students a membership to ACM SIGGRAPH. I had never heard of ACM SIGGRAPH before but I applied to be a student volunteer and was accepted. In preparation for the conference, I spent weeks making VHS copies of my animations and brought a suitcase full of tapes to the conference. I was so blown away by the quality of the work I saw that I was too embarrassed to give any of mine out. I went back and worked even harder to improve my work.

The following year, one of my peers had a proposal accepted into the Emerging Technology venue and then was unable to do the project. Ken O’Connell asked me if I would be the Project Lead and take over. It was very popular at SIGGRAPH and from then on I was a regular contributor to the art and emerging technology areas.

From 1990 onward I volunteered for SIGGRAPH and in 1994 the EC was looking for “young blood” and asked me to run for Director at Large on the EC and I was elected. From then on I got involved with the Communication Committee, Education Committee, Chapters and Digital Arts Community Committee. In 2006, I was the SIGGRAPH Art Show Chair in Boston.

I am not sure what year it was but at the Wrapup Party in LA we were getting a little crazy after a few Margaritas and I decided to throw Wayne Carlson (fully clothed) then at Ohio State University into the pool. This started a chain of events and I ended in the pool as well. More than 10 people ended up in the pool but I started it all.

My artwork focuses on psychologically altering the participant in specific ways. My collaborator and I had just completed a large-scale interactive immersive environment focusing on extreme experiences such as bungee jumping or sky diving and had a 20 hour ride back from Florida to reflect on the outcome. We decided that our next project would be quite the opposite and attempt to put the participant into an introspective, relaxed state. We transformed a room into an immersive audio visual experience using ambisonic sound and particle system animation. When the participant sat in a sensor-enhanced chair, a ghost-like ethereal figure emerged and walked up to the participant and asked them a an introspective question then retreated into the background transforming into a tree. Figure after figure approached the participant and transformed into trees thus creating a forest. The premier of the project was in Michigan at a festival and we finished the piece at 10pm. We needed a participant to sit in the chair so we could calibrate the system. The only one around was a janitor who happily agreed. Although it only took 15 minutes to complete our task, the janitor, because he was so relaxed and engrossed in the experience, would not move from the chair for an hour. This happened repeatedly at all our exhibition openings and although the project was highly successful in achieving what we intended, it was a problem because people did not want to get out of the chair once they sat down.

I would love to have sat and talked with John Whitney Sr. about his work. He was a brilliant innovator, animator, composer and philosopher. He developed a mechanical analogue computer system to create amazing abstract visual music animations. I am particularly interested in his philosophy related to the relationship between audio and animation.

I live in Maine in the summer and for a month in December and in Ohio during the school year. I am an avid organic gardener and built a house on a lake in Maine with the help of my sister. I also lived on a commune in the early 80s and had my two oldest children there.

9. Which person you learned the most from? What did you learn from them?

There were three people in particular that taught me important life lessons: Antoinette Jackman, my highschool art teacher in Maine taught me to respect the environment and to care about the food I eat. Sallie Wesaw, my college art teacher in Wyoming, taught me that innovation and creativity is a result of an interest in a wide variety of disciplines. Craig Hickman, my university computer art professor, taught me how to teach myself. He was a brilliant man but instead of answering my questions, he would only give me clues. This forced me to research the answer myself. It was frustrating at the time but he taught me the best lesson of all.

Initially it was Ken O’Connell, my graduate school chair, but once I started volunteering, it was the amazing people I worked with that kept me coming back. Notably Mary Whitton, the Executive Committee Chair I worked with in the early 90s, inspired me to keep volunteering for SIGGRAPH because of her dedication, brilliance and positive energy.

I was the SIGGRAPH 2006 Art Show Chair and took a year off from work to organize the largest art exhibition SIGGRAPH has ever held. We received over 1200 submissions and exhibited over 150 installations, wall-hung work, net-art, sculpture, experimental animations along with 14 electronically-mediated performances (performed twice each) and a retrospective of over 75 of Charles (Chuck) Csuri’s large-scale artwork. It was an amazing show and my team was incredible. The artists and performers were extremely appreciative of the enormous effort I put into this show and awarded me a white origami crane that they all signed with their gratitude.