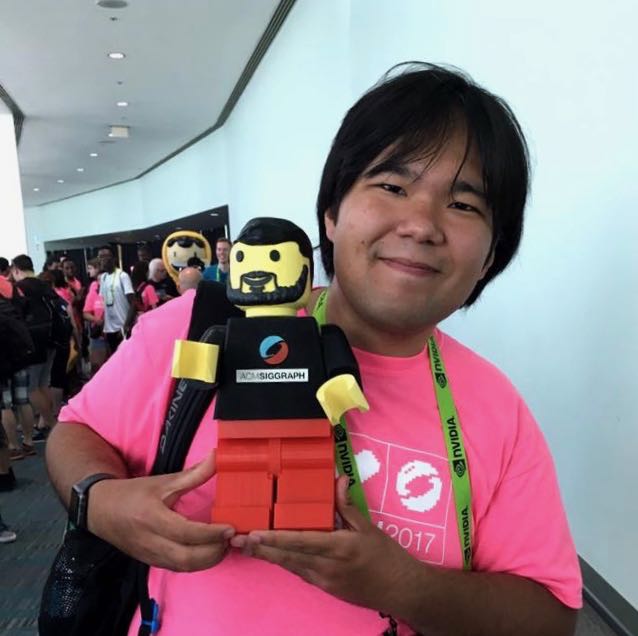 I am a researcher with a background in computer science and human-computer interaction studies. My current work investigates how mixed reality and telepresence can improve mobile videoconferencing applications in social and collaborative scenarios. Aside from this I have been also working in the areas of mobile computing, media streaming, and spatial audio.

I have been doing this for about six years, starting in my home country Kyrgyzstan, and then moving to Japan as a graduate student. I have been involved in Student Volunteer Program since 2015, and since 2017 I help managing the audio guides and podcasts production at ACM SIGGRAPH International Resources Committee (IRC).

I started as an iOS developer intern at a Russian IT outsourcing company Sibers, where I worked as a full-time mobile developer for two years after completing my internship. My favorite part was doing educational seminars and training junior developers, which is perhaps why I still actively participate in developer meetups and conferences such as SIGGRAPH.

My first SIGGRAPH was in 2014 in Shenzhen. Although I was just an attendee, I was surprised by how positive and motivated were the student volunteers. I applied for SV Program at SIGGRAPH Asia in Kobe and I have been involved with SIGGRAPH ever since.

Every SIGGRAPH has something special. This year my favorite memory was when I accidentally bumped into the author of several papers I cited in my dissertation. Turns out at that time he was a PhD student in a Japanese university just like me, and these publications were a part of his dissertation as well.

Awkwardly enough, my work claimed that my approach was better than his, so basically we had two PhDs from neighboring universities unknowingly arguing against each other. We both laughed at the absurdity of this situation, exchanged contacts, and still occasionally stay in touch.

IRC is currently collaborating with SIGGRAPH Spotlight podcast, where we conduct interviews with industry leaders from diverse international backgrounds. Since the next SIGGRAPH Asia is going to be in Tokyo, we are hoping to bring more attention to the Japanese part of SIGGRAPH community. As someone who has been a part of this community for the past five years, I am very excited for this opportunity and I hope our potential listeners and readers would find this interesting as well.

I would meet John Carmack. His work on video games such as Doom series was what got me interested in computers and 3D graphics ever since I was a kid. Nowadays his work at Oculus influences VR industry and my work just as much, and if there is an opportunity I would like to ask him how he sees the industry in the nearest future and what technical challenges he thinks we need to solve right now.

I would also ask him what was the strangest hardware he has seen Doom running on.

I am a big fan of Japanese underground music scene. Ever since I moved to Japan, I went to a lot of shows, and as a result I met many famous artists, promoters, and label managers. I still try to participate and support local underground whenever there is an opportunity.

I also founded and am still running the first (to my knowledge) large meetup dedicated to DIY mechanical keyboards in Tokyo. Every year we gather a crowd of enthusiasts from different parts of Japan and abroad, and host panels and demos that discuss design, development, and production of DIY input devices and their accessories.

Although the question asks for a single individual, I would say I learned most from my parents. They taught me both compassion and critical thinking, and have been very supportive throughout my career. I am not sure if I would be where I am today without their help.

Daniel Drochtert’s advice and support played an important role in my decision to work with SIGGRAPH. We first met during S3 resume review, where he gave me a fresh perspective on my PhD, motivating me to stay in academia and SIGGRAPH community. Later on he encouraged me to apply for a SV Team Leader position in Macao, after which I could not help but get more and more engaged with SIGGRAPH and industry in general.

I also enjoy working with my SV and IRC teams, which motivates me to stay involved with SIGGRAPH.

I am still in the beginning of my career, so I guess it is a little early to discuss my proudest moment. However, recently I was very proud when my research project, that I spend so much time and effort working on, got accepted for publication at several major conferences and a journal. I hope there would be more moments to be proud of, and I am looking forward to contributing to SIGGRAPH community and the body of science in the nearest future.