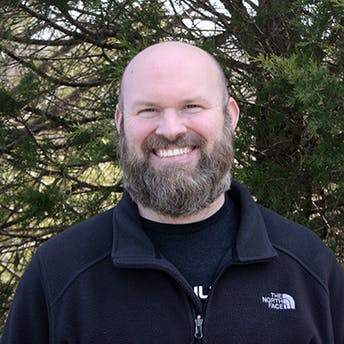 I’m a Sr. Software Developer at Cesium. I’ve worked on the CesiumJS library in varying degrees since its creation in 2011. In 2017 moved into working full time on Cesium ion, our streaming platform.

My first job ever was a dishwasher at a Knights of Columbus. In my career, my first job was as a developer at Analytical Graphics, Inc., mostly focusing on GIS integration and eventually moving onto the 3D graphics team.

A group of us attended the conference in 2008. It was such a cool community that it was hard not to get more involved. I’ve given talks at various BOFs over the years.

That’s a tough one. There are so many. A lot of them are the parties at the 2009 New Orleans conference. :-)

Joking aside, I would probably have to say the first time I presented, which was to a packed room at the Carto BOF. It was the biggest group I’d spoken in front of so I was a bit nervous, but I was sharing an update on 3D Tiles, an open standard for streaming massive 3D datasets, which at the time we’d just begun developing.

Cesium Stories was one of the coolest projects I’ve worked on in recent years. It lets you tell your story in 3D with various types of geospatial data. This story (https://cesium.com/why-cesium/communities/smithsonian/) showing a space shuttle from the Smithsonian collection is one of my favorites made with Cesium Stories.

Oh man…this is another tough one. I can think of so many in music, sports, technology. I guess based on the audience reading this I’ll go with Linus Torvalds. I’d just love to pick his brain and hear interesting stories from the years of Linux development.

I have a lot of varying hobbies that include powerlifting, tinkering with home automation, and sampling good craft beer.

I’d probably have to say my dad. He was always involved in computers and technology when I was growing up. He always encouraged me to learn more things and take classes outside of normal school.

Patrick Cozzi. He led the way to get funding for me to attend my first conference in 2008.

Being part of the initial Cesium team that took it from an idea to its own company. There was so much work that went into it, and it was so rewarding when it finally paid off.