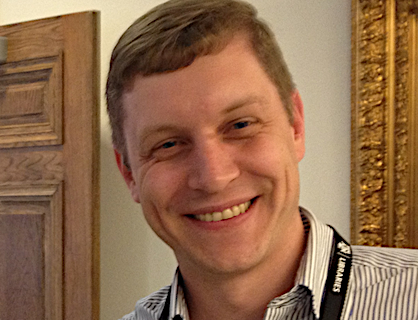 I am a professor at Texas A&M University and currently Department Head of the Computer Science & Engineering department. I joined the university in 2006 as an Assistant Professor. My research is, of course in computer graphics, and my work broadly falls into the field of geometric modeling. I study how we represent shapes digitally and things we can do with those shapes.

Well, my first job was setting up pins at a bowling alley for 9 pin bowling. 9 pin bowling is much more complicated than 10 pin, and the state machines for 9 pin were evidently too complicated to have automated back then. My first technical job was in college when I worked for a startup named WholeBrain Media. We did a good deal of Java programming in the new Java 1.0 language as well as more specialized development for the Palm Pilot.

I did my BS at a small school called Trinity University. For my MS/PhD, I went to Rice University and worked with Joe Warren as my advisor.

My first SIGGRAPH was in San Antonio (2002) to present a paper on Dual Contouring. I was crazy nervous since it was only my second public talk, and I was in this massive hall with what seemed like 1000 people. I had practiced my talk so many times that I could recite every word on autopilot. But up on stage, my hands were shaking so badly I was worried I wasn’t going to be able to advance the slides. Eitan Grinspun congratulated me afterwards about how calm I looked. Luckily the podium hid my hands from the audience. That was a great experience.

My favorite memory was during the presentative of our bijective parameterization paper. We built this video of this horribly parameterized circle being transformed into a Hilbert space filling curve only through bijective steps. It was a tortuous example I had come up with in an attempt to find a failure case for our method… except it basically worked but got stuck right at the very end. It really was an impressive failure case. We showed that video during the talk and the audience broke out into spontaneous applause in the middle of our talk. I had never seen that happen before, but then I was kind of upset that I wasn’t the one giving the talk.

I’m going to cheat and also say that talking with my colleagues, whether it be between sessions at a meal or at a party at SIGGRAPH have been some of my favorite memories as well.

One project? That’s like asking which kid is your favorite. I’ve already used this example, but I really liked our bijective parameterization paper. Essentially, we’re given a mesh with a cut graph and attempt to find an embedding in the plane that minimizes the symmetric Dirichlet energy. First, the energy metric turned out to work really well at both measuring distortion and generating good optimization solutions. But the thing I liked about this project is that it came out of my teaching. I taught a game development class, and the students were complaining about the parameterization tools built into commercial and open source systems. The students had a really hard time creating a bijective parameterization, and the existing tools were extremely poor. So I set out to build a tool for the students, and it became a research project.

The cast of The Goonies. I was obsessed with that movie growing up.

I enjoy baking desserts, and I’m pretty good at it. I started as a kid when I realized my parents would let me have a dessert if I made it myself.

Well, my advisor, Joe Warren, is an easy one to pick here. He taught me how to do research and how to give talks (I was terrible at this prior to grad school).

Not really any one person. I enjoy my colleagues in graphics, seeing the cool stuff they do, and would like to see the field succeed. SIGGRAPH is *the* organization to work with for those things.

This is a very hard question. I had to ask my wife for suggestions, and I’ll use one of hers. A few years ago I received a university level teaching award… a pretty big deal in a university of over 70,000 students with many awesome instructors. It was perhaps more special in that my father received his degree from the same university as a first generation student, and both my parents were able to come to see me receive the award.