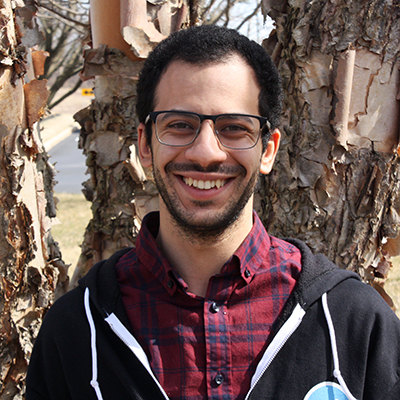 I work as a graphics programmer at Cesium where we all do a little bit of everything. On any given day, I may be knee-deep in our open source rendering engine chasing a bug, reviewing code contributions from the community, or tweeting about an exciting new demo we put together. It’s kind of a dream job.

I’ve been part of the Cesium team for just a little over a year now.

When I was 12, I made a flash game that earned me exactly $32 on FlashGameLicense.com. I remember receiving the payment and withdrawing the cash to hold it in my hands. It was a big deal for me because it meant I could officially call myself a “professional” programmer.

I was a Maths and Computer Science double major at St.Olaf College in Northfield, Minnesota.I graduated in 2018.

4. How did you first get involved with ACM SIGGRAPH

I remember stumbling on a YouTube video of one of SIGGRAPHS technical paper trailers in high school, and being absolutely amazed. These were scientific papers, but they looked like they were performing magic. And what kind of conference releases action-packed trailers for its technical papers anyway? I remember reading about how SIGGRAPH was all about the intersection of art and tech. It was love at first sight.

It wouldn’t be until my junior year in college that I’d discover a way to get involved, through the SIGGRAPH student volunteers program.

I’ll never forget meeting Eric Haines in person. We didn’t have a computer graphics class at St. Olaf College, so I learned most of the fundamentals from his online Udacity class. I had spent such a long time listening to his voice in those lectures that it was kind of surreal meeting him in person. What was most surprising was when I walked up to him and told him I had finished his class online, before I could ask if I could take a picture with him, he asked if he could take a picture with me!

Apparently, a lot of people start the class, but very few end up completing it, so he was just excited to meet someone who finished it as I was to meet this man I admired so much.

I recently wrote an interactive article called Unraveling the JPEG, where I tried to make the joy and excitement of working with computer graphics accessible to a wider audience. The project started out when one day I was curious how JPEG compression worked, so I started fiddling around with the bytes of an image file on my desktop. To my surprise, most changes I made had no noticeable effect on the image, but changing one particular byte seemed to completely wreck the image. This was a great mystery to me at the time, and it was very fulfilling to dig deeper into the specification to unravel exactly what was going on.

This is the same kind of feeling I tried to recreate in the article. You’re given an image with all of its raw bytes, and you go along this guided exploration where nothing is dumbed down or omitted. I’m very proud of it because after releasing it, folks who know more about JPEG than I do were able to use the interactive diagrams in my own article to teach me things I didn’t know (for example, I don’t mention much about the effects of quantization,but if you know what bytes to look out for, you can see exactly how it works). That meant the article could be used as a tool for both teaching and for exploration beyond what I was able to cover. Sparking this kind of play and exploration was exactly what I hoped would happen here.

Bret Victor. I must have watched his “Inventing on Principle” talk at least a dozen times by now. His philosophy not just about software & design, but about the role of technologists in society, has greatly influenced much of my work and career choices. I still think about it a lot, and I recommend this talk to anyone who feels drawn to a purpose-driven way of understanding your career.

I spent 7 years doing gymnastics, and at one point got to 2nd place on the parallel bars in a national championship (in Egypt).

My high school friend,Shady. We had kind of a friendly rivalry in high school. Every morning I’d see him and tell him about whatever new thing I had learned or new project I was working on, and he would do the same. If I didn’t have anything new to share that day, I’d have to try harder to produce something the next day. I think being around Shady taught me how much faster you can grow and learn by making sure you’re surrounding yourself by people smarter than you.

10. Is there someone in particular who has influenced your decision to work with ACM SIGGRAPH

Professor Olaf (who teaches at St. Olaf College and lives on St. Olaf Avenue) had done his PhD in computer graphics. He had his office opened up as essentially a second computer lab, so I would always frequent it and browse through his collection of SIGGRAPH publications and computer graphics books. It was through being around all that that I began to feel that participating at SIGGRAPH wasn’t just a lofty goal but something I could pursue.

I think it was the first time I attended a conference, which was at GDC in 2013 to showcase the most ambitious game I’d been working on with my partner at the time. We got a lot of attention at our booth, and even got an article about us called“Two kids made my favorite game at GDC”. I remember people walking up to me, telling me that they’ve been following my work for years, and that they were excited to meet me in real life. I also remember people dropping off their resume’s at our booth, in case we were hiring (I was in high school at the time and had never even made a resume before!)

It’s still really cool to run into people in real life who have played my game, which has since been released as “Move or Die”, who usually assume it was made by some large company when most of the programming was just me coding whenever I wasn’t in class.