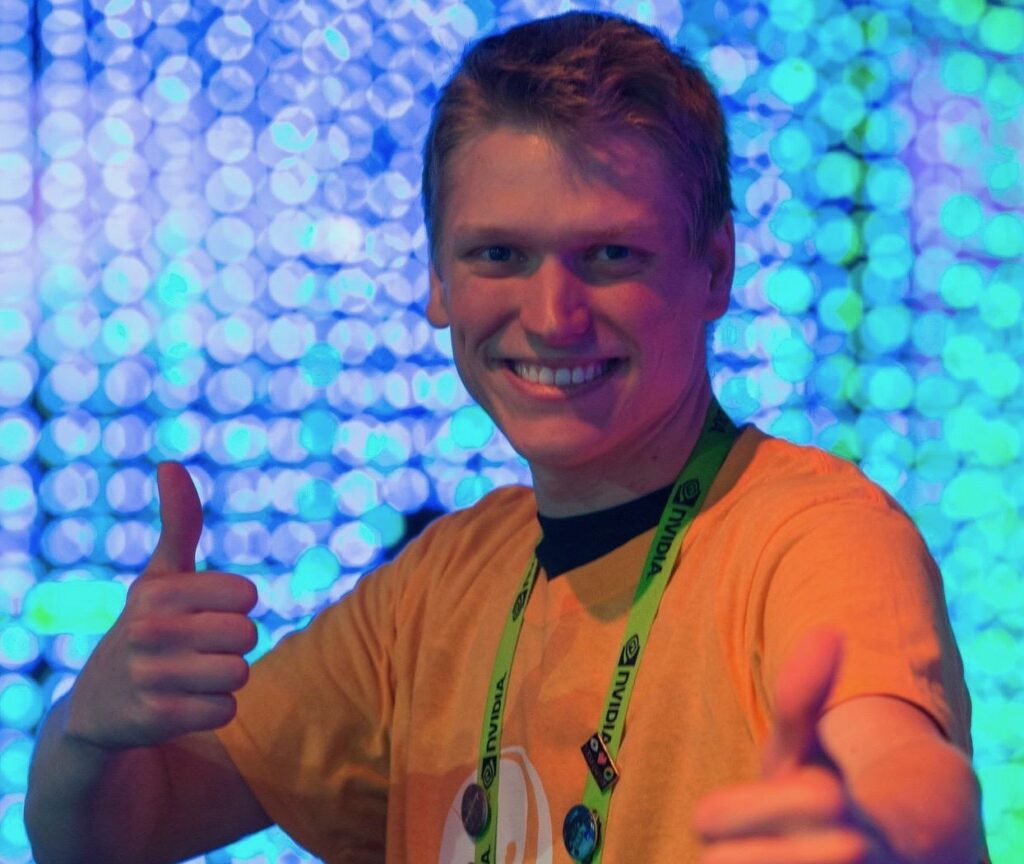 I am an aspiring character rigger and animator! Character rigging mainly consists of creating a set of controls for animators to use. Rigging is such an awesome technical challenge for me, because I get to make up the anatomy of a character and think about the subject would naturally move. Animating is all about taking those controls and bringing a character to life. I personally love the concept of movement and thinking what could be done visually to create an enticing experience. In person, I have an explosive personality, which comes out in my animation.

In middle school, I knew I wanted to be an animator, so at R. L. Turner High School I joined the Academy of Media Arts and Technology and became certified in Adobe Flash. Then I learned about the Visualization program at Texas A&M University and knew I wanted to become a fighting Texas Aggie!

As for work, I am currently a game designer working on a virtual reality drone simulator for Assistant Professor, Eric Du at Texas A&M. I have learned a lot about using the HTC VIVE within Unity.

My very first job was working as an Usher and Concessionist for Cinemark. In between selling and cleaning up popcorn, I was able to watch movies throughout the week. I love films and was able to collect a lot of posters and cardboard cutouts!

Animation wise, my first job was creating animations for Texas A&M’s Nano Bio Group. It was my responsibility to show how oil cells within water droplets multiply overtime. I worked with Postdoctoral Researcher, Hyunsoo Kim by sketching out ideas with him and then producing the final product through Maya.

As of right now, I am a senior in the Visualization program at Texas A&M University. I am currently applying to graduate school to focus on rigging and animation!

Texas A&M has a student run organization called TAMU ACM SIGGRAPH and as soon as I went to the first meeting I was hooked! I loved the idea of students helping each other learn how to use technology to create exciting experiences.

My first role within TAMU ACM SIGGRAPH was being a social media officer. I took pictures at each meeting and made sure each event was sent out online through Facebook.

The Visualization party that Texas A&M holds for old and new students was a blast! It was really awesome to meet old Aggies and talk about their experience growing throughout the Visualization program. It’s really fantastic how much of a community of Aggies there are within SIGGRAPH.

I recently created an animated short called, Kicking and Screaming for Tim McLaughlin’s Senior Vertical Studio class. I collaborated with four other students to create a 10 second animated short in 8 weeks. I came up with the idea, rigged and animated the character, and provided sound and final edits for the project.

This animated short is a clip of the day of a life of an old, beaten soccer ball. I imagine that as a ball you get thrown, kicked and pummeled, so towards the end of the day it can be pretty rough for a worn piece of equipment.

For this project, I mainly wanted to focus on creating huge facial expressions. I adore John Kricfalusi’s work on Ren and Stimpy and wanted to bring that kind of energy to my own. For the soccer ball rig, I made a graphical user interface that allowed the animator to easily turn on and off the blend shapes for the character. You can check out the short and breakdown page for the project on my website below!

I’m going to have to “Da’ Cheat” on this one and say Matt and Mike Chapman from Homestarrunner.com. I have followed their work ever since I was in 5th grade. Homestarrunner.com is a website that shows what the creators’ call their “weird animal characters” getting involved with strange and hilarious antics. Their comedy and cartoons have influenced me as an artist and a person. Their cartoons are so unique and funny to watch that I wanted to incorporate the same feeling into my own personal work. I can even do a pretty mean Homestar and Strong Bad impersonation if you ask me! They were the main reason why I became certified in Adobe Flash in high school and went on to create animations.

I love critiquing everything I watch! I am constantly looking for quality in every product that’s out there. I even critique commercials and when one doesn’t make sense or isn’t entertaining I will go on a rant! I have been watching film and video game reviews on YouTube ever since I was in high school, which has influenced my perspective on how I view a lot of multimedia.

Honestly, my parents are the people who have taught me a lot through my entire life. When I was a kid, I always hung out with my mom. She was a leader in my Cub Scout group, so I was with her a good chunk of my childhood. She taught me how to relax and enjoy life and be responsible with my time when it comes to work. When I went to high school, I built more a relationship with my dad through watching films and playing Mario Kart on the Super Nintendo. He taught me how to think more logically as an adult. Both of my parents have encouraged me to push forward with my career and I love both of them for it. I wouldn’t be where I am today without their support!

My answer would have to be Cameron Coker. He was the president in TAMU ACM SIGGRAPH for a while and lead with the chapter with confidence and passion. He was always looking to spruce up the quality of the chapter with each meeting that was held. I have gotten a lot of advice from Cameron throughout my college education, so I would like to personally thank him for being a great mentor and a friend.

Where I think I really found my calling was being an Industry Relations Officer. I love bringing industry speakers to Texas A&M, because I get a rush seeing students asking questions to professionals about how to prepare for their careers. I have had a blast getting to meet industry talent for TAMU ACM SIGGRAPH, because I had the opportunity to go to the Screw Attack Convention, Rooster Teeth Expo and the 2016 SIGGRAPH Conference. It’s really neat to meet the people who worked on my favorite shows and movies. Everyone I have ever spoken to at these events were incredibly nice and helpful, which makes me feel like this is the profession that I want to be attached to.

I would like to say thank you to every speaker and professional that have helped out with each SIGGRAPH event I’ve organized. Without you, we wouldn’t have had an amazing time learning about how to kick start our future careers.

Now, I am the Vice President of TAMU ACM SIGGRAPH and can’t wait to start off the semester with a bang!