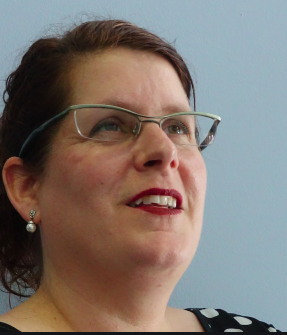 I worked as a medical technician for many years in service to mostly disabled veterans. While at the time it was a good job to pay the bills, and I could work 24/7 if I wanted, it actually ended up being super valuable as a designer to inform more accessible design proposals.

I have a BFA from UMass Amherst & an MFA from Cal State LA, both in computer animation.

Copper Giloth (ACM SIGGRAPH 2000 Outstanding Service Awardee) was my advisor at UMass Amherst and she informed us all about the student volunteer program. The conference was in my hometown that year, 1989 in Boston, so I was able to attend as a volunteer, an “SV,” that year, and have been to the conference every year since.

One of the things I am super excited about now is how graphics and interactive techniques are crossing fields and supporting projects and industries that used to be fairly isolated. Real-time gaming graphics are being used in theme park attractions, digital pipeline processes from film are being used in television and themed experience development processes,Virtual Reality is being used in pain management for hospital patients. It’s thrilling to see talent and processes seamlessly contribute across wider ranges of projects. This presentation at SIGGRAPH 2019 by Bei Yang from Walt Disney Imagineering is a good example of the rendering horsepower from a gaming engine being used in a themed attraction.

6. What is something most people don’t know about you?

I am a supertaster / smeller. Which means I experience the world as a cacophony of smells and flavors. In general, it’s not super useful.. but I have tracked down several dangerous gas leaks in my life and enjoy fruit, spring flowers, & Xmas trees as intense olfactory awesomeness. They Might Be Giants wrote a song about it, if you are not familiar with super-tasters.

7. Is there someone in particular who has influenced your decision to work with ACM SIGGRAPH?

One of the longstanding values of the ACM SIGGRAPH Community is the culture of mentorship. I was so lucky to be mentored by senior folks in the industry when I was a student volunteer. From conference venue chairs and jurors, to our operations and management teams everyone has always been so kind. And then when you reach a certain point in your career, that model starts to flip and you become the mentor for developing industry professionals, and we continue to develop ongoing and the next generations of our industry.