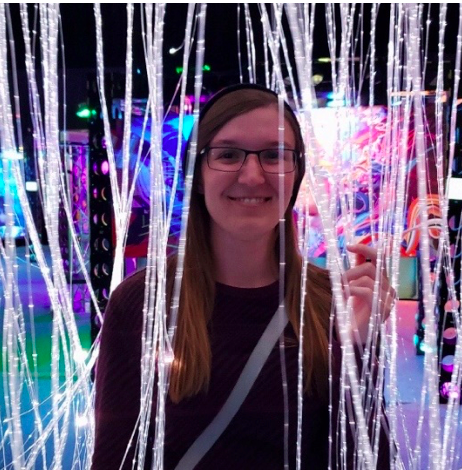 I am currently a student at Savannah College of Art and Design studying for a 3D Character Animation BFA. I have been animating for a little over a year now and love the journey of learning new programs. The further I delve into my major and the industry (through conferences) simultaneously, the more I see my passions align with available careers. On the side I also enjoy illustrating and designing for fun, which I have done practically all my life. My passion for art has grown more since high school, as that was when I truly found my love for animation and telling stories through characters and other effects.

My first job was as a food service attendant at a nearby bowling alley. Though hectic at times I think it was a great environment to learn how to work quickly and efficiently under pressure. I also feel I developed stronger self-confidence there. The coworkers I met there were incredibly supportive when I discussed my artistic endeavors, and I’m glad I had the opportunity to work with them as a team for the year that I did.

I am currently still scheduled for another two years of school, but I plan to complete my BFA in 3D Character Animation at Savannah College of Art and Design. Previously, I attended Cypress community college in California, where I studied and earned an Associate’s Degree in Studio Arts.

My first involvement with SIGGRAPH was attending in Anaheim in 2016. My dad had been watching SIGGRAPH’s events for a few years since he works at a software company and is an ACM member. He suggested I check it out since I expressed an interest in both technology and art. Attending the conference was a little daunting because we had different passes, so I could sit in on sessions my dad could not. Though I was nervous, I took a deep breath and went for it- and after a couple days I felt much more confident in general, as well as in my environment. I found plenty of content to enjoy such as behind the scenes movie panels and VR Theater and met interesting people along the way. This continued as I applied and was accepted to the SIGGRAPH volunteer program for the years following (2017, 2018, and 2020). This summer was especially exciting, as it was my first year as a Team Leader!

It’s difficult to choose, but I think I’d have to go with one from the 2019 conference in L.A. I steadily made a handful of friends throughout the week and brought along a friend from home, so we had a good-sized group. As a last huzzah on the final day of the conference we planned to go out to eat- a vegan cinnamon roll shop nearby. We sat around and chatted for a while about our experiences at the conference and plans we had for the future. Although it was sad to say goodbye, we exchanged contact information to keep in touch. It was a wholesome memory of spending time with good friends and good food. I admit the conference itself is wonderful, but the friendships I’ve made through it are even better.

One project I am currently working on aside from school is promoting my illustrations through a small, self-run shop. I have been working on designs for the last two years and have grown my stock, especially within the last year. I take advice from other artists at conferences and conventions who have successful businesses so I can branch out with different merchandise to express myself and my ideas. So far, I have enjoyed creating buttons and stickers of my art, but I hope to someday branch out into enamel pins, maybe even plush and other items as well.

I would love to have dinner with Mark Fischbach (known as Markiplier) because I think it would be nice to sit down and talk with him. I’ve been a fan of his work for about six years now and whenever I’m in a rough spot or feeling under the weather, watching his videos never fails to make me smile. He’s goofy and kind and knowledgeable, so I’m sure spending an evening with him would be a blast.

Something most people don’t know about me is that I like to compose music on occasion during my free time. Music has played a large part in my life, whether it was listening generally or playing various instruments (my favorite was between the drums and the alto sax). I like to sing ad libs then translate them into small compositions that I post on Soundcloud for fun.

I believe my dad has been the most influential in my life. I looked up to him growing up because he works with software and I had a strong love for computers. He encouraged me to play around with devices and see what I liked- over the years this branched out to include art as well. I found I liked to understand how things worked, whether that meant taking apart old phones at his work or watching behind the scenes panels for popular films and media. From him, I’ve learned to be open-minded with others as well as myself with my own interests, because you never know where an open road may lead.

My dad was the one who introduced me to the SIGGRAPH conference and influenced me in my decision to work with them as a volunteer. In 2016 I was unsure exactly what I wanted to do in the creative industries, so he suggested I attend SIGGRAPH to see what was in development and what piqued my interest. There, not only did I find further love for animation, I also became passionate about the structure of the conference and how diverse it is. It enabled me to connect with people I may not usually have the opportunity to interact with and make long lasting relationships with those within my industry and similar industries of interest.

I think the proudest moment in my career so far is graduating with an Associate’s Degree for Studio Arts. While studying the foundations of classic art I found my passion for the technological, more modern side of it as well. Attending behind the scenes panels and watching animated student films at SIGGRAPH solidified my passion and from then on, I began my pursuit for a degree in 3D Character Animation.