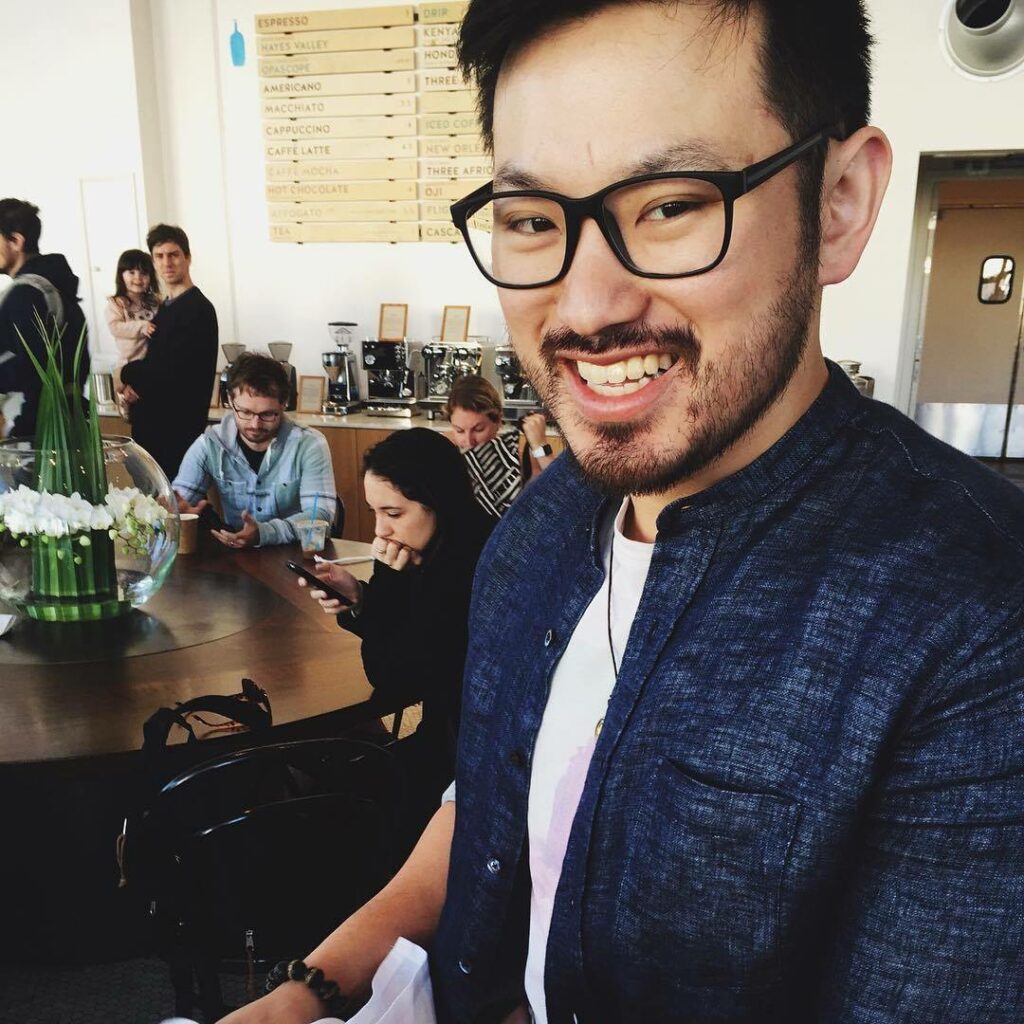 I am currently a technical director resident at Pixar Animation Studios with a focus on helping support production tools and technology needs. It hasn’t been too long – I’ve only been a resident for six months. However, it’s been an incredibly fun and educational experience so far.

My first job was to serve as a dishwasher at a Chinese restaurant at Santa Barbara, California during my first year at a community college. I had opportunities to work before – I was given an internship at an advertising agency prior to permanently moving to California from Asia, for example – but I value the experience I was able to earn on my terms. It’s a bit of a cliché, but I’d like to believe that the long hours and work ethic required to keep apace with the needs of a restaurant built character (or at least made me one!). I eventually moved up to being a water, a maître d’, and even assisted the chefs in preparing food from the kitchen.

I graduated from the University of California, Berkeley, with a Bachelor’s Degree in Computer Science. Go Cal bears!

I first became involved with ACM SIGGRAPH as a student volunteer through the SIGGRAPH 2012 Student Volunteer Program. I had always been interested in computers and animation as separate subjects but had never considered the possibility of consolidating my technical background with a desire for creative expression – it was only through taking coursework on computer graphics at the university that I realized that there is a middle ground through which I can develop my interests. I did some research on what type of opportunities would be available to learn more about the field, which is how I found out about SIGGRAPH and the Student Volunteer program. My computer graphics course instructor (and future advisor) encouraged me to get involved and recommended me as a volunteer.

I’m incredibly grateful to have been involved at a young age; the mentorship and the opportunity to engage and learn from the larger computer graphics community undoubtedly defined the trajectory and perspective I took of my career and opportunities, and I wouldn’t be where I am today without these experiences.

My favorite memory of a SIGGRAPH conference would have to be the fruition of the Games Committee’s work for SIGGRAPH 2015. I remember starting out not even being involved with the outreach for games-related content – I was originally brought on board purely to work on the mobile app and its associated game – so when our committee needed help to bring in content I was in a position where I needed to communicate and outreach without any prior connections to the games industry. I remember working very hard to outreach and build these relationships over time, and I certainly wouldn’t have done so without the advice of the Games Chair and the greater SIGGRAPH community. Seeing it all come together at the conference and hearing the positive feedback from folks who I now consider friends is worth all the work, and I wouldn’t trade the growth and maturity I derived from this experience for anything.

One of the projects that I am most proud to have been involved with would be my collaboration with SIGGRAPH and Double Robotics to help Paulo Machado attend SIGGRAPH and visit different studios via telepresence robot.

Paolo is a 48-year old polio survivor who has been bed-ridden in the hospital since he was a baby. He is an aspiring animator, and we wanted to take him to places to connect with people and experience things that he would normally not be able to.

He was able to attend SIGGRAPH 2014 and 2015, and had a blast doing so! While I have personally set aside time to focus on my residency I would love to resume working with Paolo and the rest of the SIGGRAPH community towards creating safe and inclusive communities for anyone with an interest in computer graphics and interactive techniques. I believe that in doing so we live up to the spirit of growth, openness, and collaboration that is emblematic of our community at its best.

If I had an opportunity to have dinner with one non-living person, I would want to eat with Ray Bradbury. I read a lot of books growing up, and I immensely enjoyed Bradbury’s take on the science-fiction, the supernatural and his nostalgic perspective on Midwest Americana. I once wrote a fan letter asking to interview him when I was a high school kid and never heard back – it would be amazing able to converse and show my appreciation of his work.

If I could have dinner with one living person, it would be entrepreneur and engineer Dado Banatao. Dado and I both come from the Philippines, and we still have emotional roots there. Similarly, we both have an interest in growing educational awareness of technology and its implications towards developing countries such as the Philippines; I never had the opportunities and resources to have had a fundamental education in technology while I was younger, and I empathize with children in similar circumstances and want to mitigate the educational gap.

I would love to volunteer time to help create resources that would help the next generation grow an appreciation of computer graphics and technology in general, and it would be great to have the opportunity to meet and work with Dado’s organization towards that goal. It would be nice to pick his brain on the subject.

I am certified rescue scuba diver, and have a few rescues under my belt. My most memorable experience was a rescue in the middle of a storm – I had to share my tank with a panic-stricken diver 80 feet under water, tie down and release a diver safety marker buoy, and keep her afloat on the turbulent ocean surface until our boat could pick us up.

I would say my parents. My dad taught me that one can work hard to overcome immense adversity and did so by example. My mom helped me build confidence, proactiveness, and self-sufficiency to survive and live on my own terms.

If there was anyone who encouraged and really pushed me to grow during our time working together at SIGGRAPH, it would have to be the SIGGRAPH 2014 Conference Chair Dave Shreiner. Dave gave me the benefit of the doubt that I could do good things as part of his conference planning committee, and it’s through advice and encouragement that I was able to grow and be the volunteer that I am today.

I’m going to cheat a bit and say that being accepted as an intern and a resident at Walt Disney Animation Studios and Pixar respectively are my proudest moments. I’d like to believe that I worked really hard to get the opportunity to work with these two amazing crews, and I am personally proud of how much I’ve grown and matured in order to do so. I can only hope that I continue to grow and build trajectory in such a manner for the rest of my life with the same level of enthusiasm that I did going in!