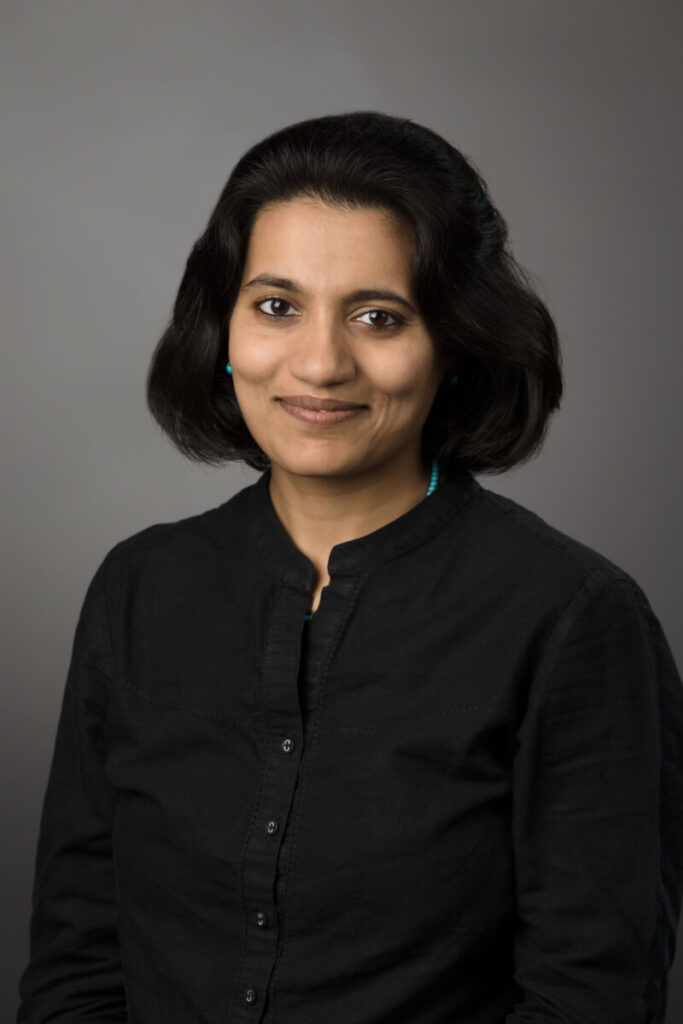 My first job was working with my father’s company in the summer between my first and second years at college: I was charged with conceptualizing and executing a visual programming interface. I learned the importance of “having something to show” in order to get effective feedback. My first paying job (!) was a summer internship the year after that at a small company in New Delhi which made various kinds of electronic circuits. Here I implemented a printer driver for a micro-controller based printer of a point of sale terminal, the kinds that print your receipt at a grocery store. I learned to work with colleagues that had diverse backgrounds and training.

3. What is your favorite memory of a SIGGRAPH conference?

Though all my memories are special, my favorite memory of a SIGGRAPH conference is when I got to present at a SIGGRAPH Frontiers session. It was a smaller session than most technical paper sessions and set up with round tables instead of rows of chairs. It was unique in that this type of session gave me the opportunity to talk about some new directions that I was exploring at the time but were not fully developed, and importantly, to engage with others who were interested in the same directions too.

My students and I have been exploring topics at the intersection of graphics/VR and privacy/security. As the graphics/VR community strives toward ever higher fidelity digital humans and increasingly more sophisticated models of human behavior in virtual worlds, we will record, collect and analyze data from humans at an unprecedented scale. This data is rich, and can be used to make inferences about a person that they may not wish to reveal in a given context. For example, it is possible to identify a user based on eye, head and body tracking data recorded by VR HMD. Consider Alice, who attends a political meeting supposedly anonymously as User X, but is identified as Alice, her real world identity, by her employer or her government as a result of data sharing between colluding apps and their parent companies. This re-identification could negatively impact her livelihood or even her freedom. Such harms are disproportionately larger for users who are marginalized and/or vulnerable in one way or another. Our recent work looks to mitigate these risks while still enabling the generation of compelling virtual experiences and digital avatars.

5. If you could have dinner with one living or non-living person, who would it be and why?

This is truly a hard question. The first thought that pops into my head is: my husband! As a dual career family with young children, it can be unexpectedly difficult to have a dinner together. The second thought is: with myself! A sandwich overlooking the Columbia River gorge perhaps. How tricky it can be to enjoy our own company! Perhaps more in keeping with the spirit of this question, if I could have a dinner at an ACM conference or a working trip, I would like to visit with Helen Nissenbaum. When I first started thinking about the concept of privacy, I was overwhelmed by the magnitude of the literature on this topic. A colleague introduced me to Nissenbaum’s writings and the notion of contextual integrity. Since then, I have found myself inspired by those writings time and again, and also intrigued the ways in which philosophy continues to influence computer science.

6. What is something most people don’t know about you?

7. From which single individual have you learned the most in your life? What did they teach you?

Once again, a very hard question to answer. I have been fortunate to have several mentors and role models in my professional life from whom I learned how to be a scientist, a teacher, and a good colleague. But really, almost everyone around me teaches me something or the other. I have so much to learn! Most recently, I learned from my child’s kindergarten teacher how to not only embrace but also enjoy diverse developmental trajectories, a lesson that has made me better in my roles in the classroom and in the lab.

8. What can you point to in your career as your proudest moment?

I had to look this up. According Merriam-Webster, proud can mean “much pleased” and “glorious”. According to thesaurus.com, proud can be used as both “pleased, satisfied” and “arrogant, self-important”. I am sure there have been many moments where I have been, or have come across as, arrogant, self-important or just too caught up in glory. It is an easy pit to fall into as a reviewer for example. There have also been many moments in my career where I have been pleased or satisfied. If I had to say what these moments had in common, it would be that they involved discussions with students and colleagues that challenged both intellect and imagination.