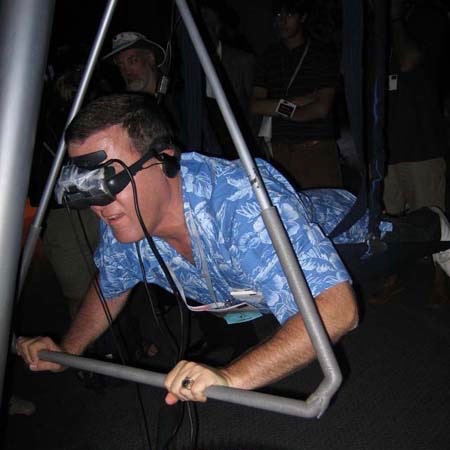 I am an associate professor at the Naval Postgraduate School (NPS) in Monterey California USA. There I get to conduct research, advise amazing students, and teach courses. Our student population includes masters and Ph.D. students across 30 majors, both US and international, dedicated men and women, typically active duty officers who are already qualified in some specialty area. Their domain knowledge, ability to lead and eagerness to learn more is unparalleled. My colleagues are world-class experts in multiple domains. I have been fortunate enough to work at NPS since 1990.

I joined the Navy, studying electrical engineering and graduating from the U.S. Naval Academy in 1978. Following formal training in both theory and practice for naval reactors, Ithen served in the submarine community with challenging and exciting tours of duty, both afloat and ashore. Underway is great.

I came to NPS in 1990 as a graduate student, continuing my studies in Computer Science with Mike Zyda. He taught me a tremendous amount, especially on how to work with others on challenging problems. Following retirement from the Navy, I’ve continued on the NPS faculty.Basically I’ve stuck with one job in my entire career: working for the U.S. Navy.

Mike sent me to Anaheim for SIGGRAPH 1993 – wow, totally overwhelming. It was amazing to learn about this alternate universe. I came back and presented the next year at The Edge exhibit of emerging technology, led by Coco Conn and Jacqueline Ford Morie.They were both very cool and very patient with all of us! I showed an Open Inventor virtual environment with 6-DOF hydrodynamics for an autonomous underwater vehicle (AUV). The spirit of innovation and the sense of no limits (except physics!) for 3D graphics was liberating.Mark Pesce and Tony Parisi were also there, showing the first Virtual Reality Markup (now Modeling) Language (VRML) banana nearby. We had a VRML BOF late one night with Rikk Carey, Paul Straus, Gavin Bell and too-many others to mention here. Later years included work with Timothy Childs to create the Web3D Roundup, wow those events were fun! TheSIGGRAPH CARTO BoF visualization demonstrations, organized each year by Theresa-Marie Rhynecontinue to show steady advancements of 3D for planet Earth. All these events have led to many years of progress… still unlocking 3D Graphics for everyone.

Serving on the SIGGRAPH 2001 committee was amazing, figuring out how a team could record the first SIGGRAPH Online sessions.Lynn Pocock was a great chair, we all learned a lot from each other. During that amazing experience I met SIGGRAPH stalwarts likeBarb Helfer, Brad Lawrence,Colleen Case and many others who remain friends today. The first committee meeting was in a Mexican resort hotel for a weekend, I dunno Puerto Incognito or someplace… the bus company ran out of shuttles at the airport (so they said) and instead there was a seriously long black stretch limo waiting. Hmmm, my first SIGGRAPH committee event, do they always travel like this?The driver was an off-season football player who asked if MKHaley was coming too – um no, I didn’t know this guy Mark. A short while later MK shows up, she was as charming and brilliant and energetic as ever. OK, into this limo we all go. Before you could flip a fair coin we were “nerding out” on 3D graphics, job politics, the meaning of cool, and literally taking the back seat of the limo apart.“Hey what a great sound system!Hey over here is a secret compartment! Hey how much do they pay you to drive this thing? Hey look how all these cables go right past the champagne cooler, where do they go?? Wow look at that controller over there!” Much fun, a great start, and another “only at SIGGRAPH” story.

First. Richard Wesley Hamming was the ACM Founder and winner of the third A.M. Turing Award who gave a series of lectures on “Learning to Learn: the Art of Doing Science and Engineering.” His first job was to serve as a “janitor of science” and help human calculatorsrun around-the-clock, supporting the world’s greatest physicists duringthe Manhattan Project at the height of World War II. He invented forward error correction, Hamming windows, did original work on numerical analysis for finite arithmetic, coined “THE PURPOSE OF COMPUTING IS INSIGHT, NOT NUMBERS.” This series distilled his life’s work.His corresponding Learning to Learn book and videos are a grand tour of computer science principles and how to think. We have 30 chapters and video lectures of “Hamming on Hamming” digitized online that teach so much – the most important questions do not change. We are building an archive to honor and expose his legacy.Everyone doing research needs to study him.

Second.If you count up all the people who have ever gone to every SIGGRAPH and related conferences, ever, perhaps upwards of a million people have engaged. Wow, but… actually that actually seems a bit small, since many many many more people than that are on the World Wide Web.What about them? The Web3D Consortium is our non-profit to make all 3D, from whatever source, publishable on the Web interoperably with other standards like HTMLfor 2D Web pages.The Extensible 3D (X3D) Graphics International Standard is our direct evolution of the original VRML to support XML, JSON, JavaScript, Java, Python, C/C++/C#, etc. etc. Every programming language and file encoding has all the same functional capability: declarative scene graph for rendering on anything, plus author-defined user interactivity. This is not a programming competition or a seasonal technology product or a lock-in moment, rather this is 3D graphics — make no mistake, OUR beloved computer graphics and interactive techniques –as a first-class media type for everyone everywhere, archival and durable. We have models that still run after decades (no really)because we care about forward compatibility and (quite amazingly) haven’t tied ourselves in knots technically by working together cooperatively. Meanwhile the outer edge of 3D publishing capabilities keeps expanding to include printing, scanning, humanoid animation, medical records, semantic ontologies and more. Inspiring colleagues Nicholas Polys, Anita Havele and I work together every week on the Web3D Conferences for the SIGGRAPH Specialized Conferences Committee and a steadfast creative community to help celebrate this year’s Web3D Conference in Los Angeles, then the 25thWeb3D Conference in Seoul in 2020.

My grandson Ashanti Judah is the man.

My longest time underwater was 71 days with a little periscope liberty. We submerged off Scotland and returned in Charleston South Carolina, on the very same day that the Iranian embassy hostage crisis was resolved. These evolutions are supposed to be secret information, but the newspaper on the pier had a giant headline “HOSTAGES FREED!!” We were surprised and wondered, how did they know?

I try to learn from everyone each day. No really. It is very intriguing. Serving others, learning, loving and working together is the most important thing you can do in your life. Everyone has so much to contribute.

Way too many people to mention here.SIGGRAPH is the most intense and interesting community of all.

Special mention for Mitch Williams, who recently passed. A great educator, a great programmer, a great explainer, a great listener, a great writer (WebGL Hotshot), a great person. We miss you buddy.

Richard Hamming’s most popular talk, given hundreds of times, was “You and Your Research.”He told how he learned at Los Alamos, at Bell Labs, at many places by listening and asking and thinking why famous inventors were effective. He described how people achieving important results often first worked for years on difficult problems, regardless of blockers and regardless of where challenges took them. He ended each of these talks with three questions. First, “who here wants to do important research?” Every hand went up (of course). Second, “who here is working on an important problem right now?”About half the hands went down, slowly, some uncertainty. They thought they knew what he was going to say next – but they didn’t.Hamming then looked the whole room in the eye, and simply asked “why not?” He briefly paused and then left the stage.

Now, answering the question: I am proud each day to ask “what is the most important problem that we must fix to get 3D graphics on the Web?” Tricky business and really interesting. This is a team sport, we figure out hard things only by working and listening together. Come join us and grow with others at Web3D if you want to help. I’m having fun with X3D!