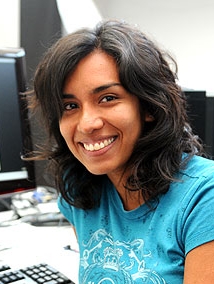 Currently I work as a Research Engineer at the R&D Department of the Institute of Animation, Filmakademie Baden-Wuerttemberg, in Germany. My work goes in the direction of Affective Computing, more specifically emotional facial animation in virtual characters. My most recent project applied this in a research study to evaluate if stylized facial expressions of emotions are better recognized by individuals with autism.

My first job was with 16 as organ and music instructor mostly for kids between 5-12 years old. The experience was very rewarding and it taught me how much you can learn from human relations and even life when working with kids.

I learned from ACM SIGGRAPH through the conference in 2003. At that time I was studying at the University Simon Bolivar, in Venezuela, and the SV (Students Volunteer) Program was very well advertised. I applied for the program but was not accepted; nevertheless, my parents helped me pay my ticket and my registration so I could attend SIGGRAPH as a regular attendee. I fell so in love with SIGGRAPH and it motivated me so much to continue in the field of Computer Graphics that I re-applied again to the SV Program in 2007, this time with much more successful results. Since then I was mostly every year SV and Team-Leader until 2012, when I was no longer student.

I think it has to be that SIGGRAPH 2003 when I attended a Production Session about Finding Nemo, and I got my poster signed by all the lead artists (plus I managed to make photos with all of them). For me it was like being with superstars because it was a world so far away from my own world. It was really like being in a dream.

My project SARA dealt with using stylized facial animations of virtual characters to study if that improves the categorization of emotions by children and adolescents with autism. I think the project is relevant as it shows another use case for stylization and abstraction, which is kind of a coming back trend.

It is difficult to mention just one name. I would say it would be with a woman that is making, or did make a change: Marie-Curie, Ada Lovelace, Jane McGonigal, Pattie Maes, Olga Sorkine … you name it. I would ask her: tell me all I need to know to make a change.

I think many people don’t know that I can play organ … yes, that big instrument that usually lives in churches :)

Definitely from my father. He had such a great vision into the future and knew exactly how to deal with situations in a most successful way. Together with my mother they built a great team. But what I learned from him was never to give up, push everybody and everything until I achieve what I want/need and never get stressed about it.

One of the people who has been along during this whole journey is Jacky Bibliowicz, who is currently the Chair of the ACM SIGGRAPH International Resources Committee. Besides him, all the people I have shared experiences and moments with during all these SIGGRAPHs have influenced in one way or another to make me stay in this community.

I’m still working on that ;)