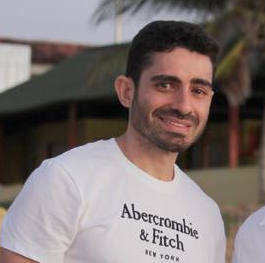 I have been working as a visualization and graphics researcher for many years now. Currently I am a PhD candidate in Computer Science at the University of Calgary, Canada. I’m working in the mix of Scientific Visualization, Visual Design and Real-time Rendering. My research mainly focuses on creating multivariate visualization of scientific data, such as medical data and geological data, to support domain experts in the process of data exploration and decision making.

Back in 2006 when I was in my second year of computer science, I had an interview to work managing a scientific computing lab in the Physics Department at the University of Alagoas, in Northeast Brazil. I worked in this position for a year and then moved to another undergraduate job, which gave me my first contact with the field of Computer Graphics. I was selected and also got an scholarship to work in a Cartoon project as a undergraduate research under supervision of Dr. Adelailson Peixoto in the Department of Mathematics. During this time I learned a lot of new things and got to work with many great people.

In January of 2014, my friend Ives Macêdo talked to me and let me know that the Student Volunteer Application was opened for SIGGRAPH 2014 in Vancouver. Since I was living in Canada, he highly encouraged me to apply. That year, he was one of the SV Team Leaders. I had only heard about the SV program briefly during my Masters but I had no idea what it really was. Thus, in 2014 I applied to the SV program for the first time. I did not expect much but I decided to try anyway. At first I did not get accepted and my name ended up on the waiting list. Fortunately, a few weeks later I got the acceptance email. Who would know that after that first experience in Vancouver I would be so involved in the program, would make so many friends and would have such great experiences!

SIGGRAPH has brought me so many memories that it’s hard to pick one. The first time I attended SIGGRAPH, which was in Vancouver in 2014, I was overwhelmed. I had never seen anything like it before. I remember getting in the Electronic Theater and watching the Godzilla production section with Warner Bros members when I had this feeling of whether this experience was real or not. I come from a small town in Northeast of Brazil and to be at SIGGRAPH, seeing people from the big studios, people who have created some of the things that I used to watch on the TV growing up, such as cartoons and movies, was an amazing experience. SIGGRAPH Vancouver 2014 was really special for me. Other moment I can mention was working as a Team Leader last year in LA. In particular, the bonding moments between the Team Leaders and the SVSC team, as well as the ones I had with the student volunteers.

During my PhD, I’ve been working on multivariate (illustrative) visualization of data on surfaces. My first PhD project consists of the idea of visualizing multiple attributes in a layered fashion using a painting metaphor, such as we commonly see in geo-visualizations such as google maps. One application of this research would be to visualize temperature and pressure attributes on the brain surface coming from MRI. This project involves several aspects from computer graphics, visual design and perception, and helps domain experts in the process of decision making. I am very proud of this project and I am very excited to see the improvements and contributions that it can bring in the future.

My grandfather. I had dinner many times with my grandfather but it would never be too much to have another one. He passed away a couple of years ago. I learned a lot from him and his way of appreciating the little things in life and always being grateful. I really used to enjoy listening to his life stories. I would also like to have a dinner with Einstein, such an interesting character!

There are a lot of successful people that I would like to have dinner and a good conversation with because of their principles, determination and service to the world. Some names are Arnold Schwarzenegger, Elliott Hulse, Tony Robbins, Tom Bilyeu and Jay Shetty.

I think a lot of people don’t know that I am very into personal development and personal reflection. I pursue this “hobby” on a daily basis (for hours sometimes), watching talks, reflecting, reading books and so on. My goal is to grow as a person, so that I can live a better life and also help other people.

Certainly my parents. I would have never achieved what I did up to now without their love, teachings and support. Growing up my dad used to sit with me and my sister every Sunday morning to study Mathematics and Portuguese. Moments like that are what I call “planted seeds”, that later can grow and become a strong and big tree. This is one of the reasons why I am finishing the PhD in Computer Science. My mom is also my source of inspiration. She is the proof of consistency and love for a family, and one of the most supportive people that I know. She taught me how to have faith and believe that by doing our best things will eventually be fine. My cooking skills have for sure come from my mom!

The other person I would like to share here is the one that showed me that with hard work things are possible even if the odds are against you. This person is my undergraduate supervisor Dr. Adelailson Peixoto.

First of all my friend Ives Macêdo. Without him I would not have joined the SV Program in 2014. Also my friend Fahad Haddad, who really encouraged me to apply for the TL position during SIGGRAPH 2016 (he probably does not even know that). Also my dear friends Muunuu and Emma Gauthier who have shared their passion for this conference and the SV Program, and who I truly consider close friends.

My proudest moments are the personal victories and realizations that have happened to me along my journey, mainly when no one is watching me. Those late nights when I had to work on a project and I was so tired of trying, but I did not give up. I am really proud of good and bad moments, which have made me grown professionally and as a person, so that I can help other people and provide some service to the world.