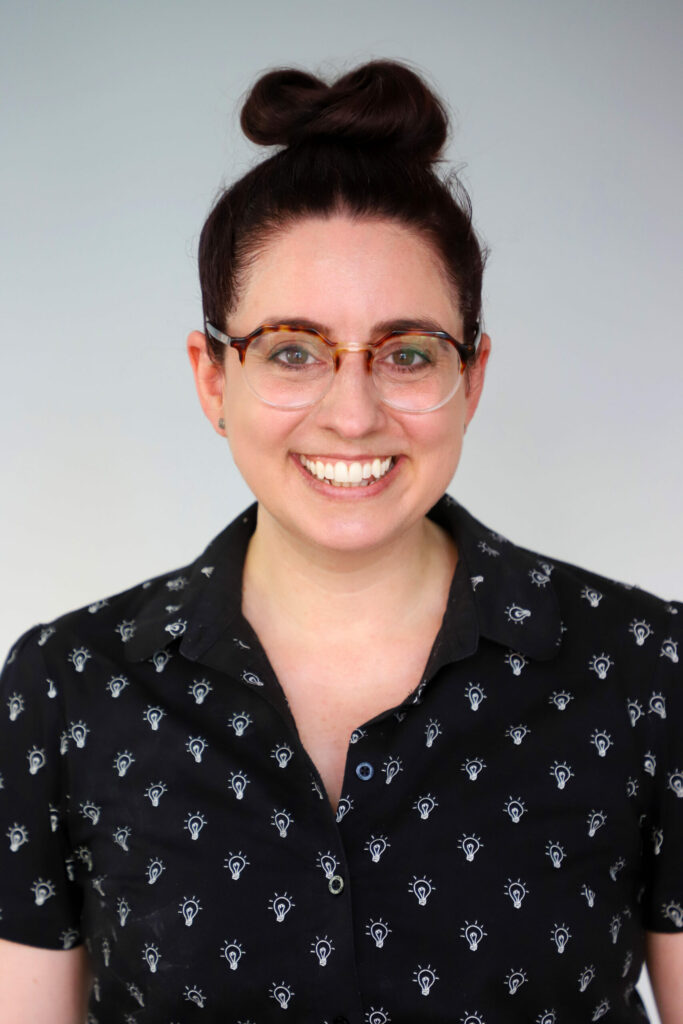 I am a professor and programmer who specializes in games and character animation. I took my first programming class (in prolog!) when I was 19 in college. One of my first assignments was to draw the Mandelbrot set and I was hooked. Like many people, graphics and games were a gateway to studying more math and software engineering. My first big program was a video game, “Attack of the Killer Vegetables”, a Galaga clone with carrots and tomatoes which featured a giant peapod that spits peas (originally in Java, now in Javascript).

Fast forward 20 years and I am now working as an assistant professor at Bryn Mawr College. I teach programming, graphics, and foundational software topics to undergraduate students, many of whom have no previous experience with programming.

After college, I worked at MAK Technologies as a C++ software engineer in their product group. At MAK, we made APIs and tools for large, distributed simulations — typically for military training systems. For example, we built networking libraries that connected different parts of the simulation together (e.g. one application might simulate ships while another simulated aircraft), 2D and 3D map visualization tools that showed the positions and status of the various vehicles being simulated, and loggers for recording and playing back scenarios. Everything was customizable using plugin APIs so our customers could tailor the tools to their specific project requirements. While working at MAK, I participated on committees for network protocols, developed new versions of their 3D and network visualization tools, and worked closely with customers.

The product group at MAK had the best engineering culture of any place I’ve worked. When debating how to approach a problem, the culture was to attack ideas, not people, and to keep your ego out of decision-making. Our product manager, Len Granowetter, was also excellent at articulating our objectives while leaving it to the engineers to figure out how to achieve them. His approach also implicitly acknowledged that “objective” decision-making is always based on subjective priorities and value judgments. The key was for everyone to know the priorities and to be consistent about up-holding them. The culture at MAK felt very fair. A good idea could come from anyone. I had a lot of respect for all of my co-workers.

I got involved with ACM SIGGRAPH in graduate school thanks to Alla Safonova, who was an assistant professor at the University of Pennsylvania when I started my masters. She recruited me to help with a submission to the Symposium of Computer Animation about motion graphs by her and Liming Zhao. When it was accepted, she paid for all of us to go to the conference!

We were watching the electronic festival at the 2009 SIGGRAPH in New Orleans. One of the submissions was a strange and abstract piece with discordant music. One of our friends leaned over and whispered: “What IS this?!”. For some reason — probably lack of sleep — we thought this was hilarious, and the phrase became a running joke for the rest of the conference.

Our recent paper, “Can You Escape? Evaluating Grasping Visualizations and Control Modes in a VR Game”, was accepted to the Symposium of Applied Perception, as well as to the journal, Transactions on Applied Perception. This paper describes experiments done with a VR Escape Room that I developed with the primary game designer, Lorraine Lin. A lot of hard work was done subsequently at Clemson to set up, run, analyze, and write up the experiments. I’m excited about being able to share the game with the world as I really like how it turned out.

I love dinner but this is a tough choice! I will choose Alexandra David-Neel, who traveled extensively throughout Asia in the early 20th century. She also wrote many books about Buddhism, including one of my favorites, “The Secret Oral Teachings in Tibetan Buddhist Sects”. She lived a courageous and unconventional life.

Growing up, I spent many summers on my grandparent’s farm in Quebec, not far from the St. Lawrence river. We kids had free reign of the miles around the farmhouse and we helped with hay bailing, cutting wood, and mending sheds and fences. By “helped”, I mean we mostly hung around while adults did all of the serious work. The farm primarily raised highland cattle, which if you haven’t seen one, look like small wooly mammoths with big horns and shaggy fur. We also had chickens, a dairy cow, a garden with green beans, beets, raspberries, and rhubarb. Typically, we would work in the mornings and then spend the rest of the day reading, playing video games, and competing in made-up physical challenges outdoors.

The most important lesson I learned during my Ph.D. was that I don’t need permission to learn or try something. Of the many talented and brilliant people who mentored me during this time, Norm Badler deserves the most credit for his support during my Ph.D. In graduate school under Norm’s guidance was when I began to permit myself to be more curious and less goal-oriented.

Hanspeter Pfister taught at the Harvard Extension School while I worked at MAK in the early 2000s. I took three amazing courses from him: computer graphics, image-based rendering, and GPU shader programming. Hanspeter’s courses had really fun projects which showcased new graphics technology that I wouldn’t have had exposure to otherwise. He also gave out hard copies of the SIGGRAPH conference proceedings as prizes. Hanspeter Pfister inspired me to apply to graduate school.

Although I’m proud of a lot of my work, I’m currently most happy about this: a graduating student recently told me that my classes gave her a lot of joy during a difficult period in her life. I feel like I must be doing something right.