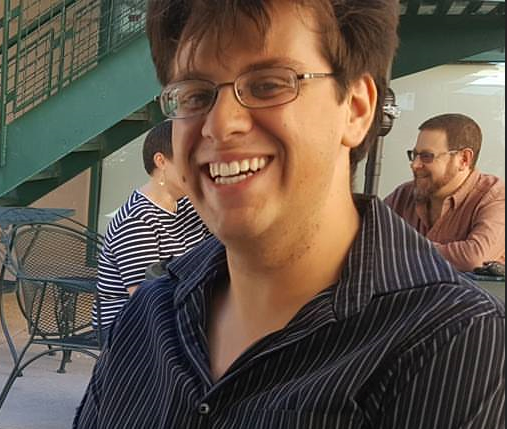 Currently I am a Master’s student studying Mechanical Engineering at New Mexico State University. I have been in school since the fall of 2009, earning three Bachelor degrees in that time in Animation & Visual Effects, Applied Mathematics, and Aerospace Engineering. This summer I have been working at Sandia National Laboratories assisting in wind turbine blade buckling finite element analysis.

My first job was working at a local pizza place in Albuquerque called Dion’s, learning the ropes of food prep and customer service.

So far all of my education has been at New Mexico State University.

The first involvement I had with SIGGRAPH was attending some of the talks and events put on by our Rio Grande Chapter. My first SIGGRAPH conference experience was being a Student Volunteer in 2015 in Los Angeles.

Attending my first conference was amazing, the energy and friendliness of everyone blew me away. Training as a Student Volunteer for the first time with the enthusiasm of the Team Leaders and Student Volunteer Subcommittee hyping everyone up for a crazy week has really stuck with me.

The graduate research I am working on explores finite element modeling of 3D woven composites and predicting overall material properties given various weave patterns and initial fiber tension. Part of that project was working on a stack of noisy microtomography images and creating a finite element analysis ready mesh that is periodic in the X and Y directions.

The person I would like to have dinner with is Carl Sagan. His philosophies on life and the universe are incredibly inspiring to me. It would be amazing to have the opportunity to learn from him in person.

All throughout middle school, high school, and a few semesters of college, I played the cello. The pinnacle of my short lived cello career was playing in the orchestra for Die Fledermaus at New Mexico State. I look forward to playing the cello again when I have some time…

Hard to say a single individual because my grandparents both have taught me so many things throughout my life. One of the things I am most thankful for is the way they encouraged my curiosity, inspiring me to want to constantly learn new things.

Derek Fisher, my animation mentor, is the person that got me interested in attending the local SIGGRAPH events. Thanks to him I have been fortunate enough to volunteer for four SIGGRAPHs now.

The proudest moment in my career so far has been completing my last Bachelor degree, Aerospace Engineering. I started out studying Aerospace Engineering, but after having a few CAD classes, I became fascinated by 3D modeling and decided to switch majors to Animation & Visual Effects. Volunteering at SIGGRAPH opened my eyes to how much science, engineering, and art all benefit from each other. This realization inspired me to continue school and finish my Aerospace Engineering degree.