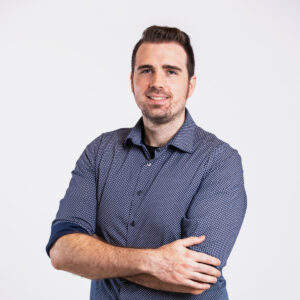 I’m a software engineer with a majority of my experience centered around XR technologies. I’d have to say it started when I picked up a game controller but I’ve been working professionally on XR products for over six years now.

My first job getting paid for programming was at a small agency creating an augmented reality application for museums exposing children to different stories and literature. Before that I served in the Peace Corps in Madagascar teaching English and computer science topics to classes of over one-hundred students. Programming the augmented reality application was a lot easier on me.

I graduated from The University of the Arts in Philadelphia with a Bachelor of Fine Arts in Multimedia. I couldn’t have known it at the time, but I am grateful for how much I learned how to learn there rather than what.

I was introduced to ACM through the company I work for, Cesium.

I still have not been to Siggraph in person, however I am looking forward to going someday.

I’ll share a less enjoyable experience, which was a training Oculus Rift VR application I worked on some years ago. After completing the application the client then later asked to convert it to an iPad application because that could be more widely distributed across their organization. The same application was later requested to be converted again to a WebGL webapp for a conference. The journey the application took from an Oculus Rift App running on a gaming PC, to a browser based 3D application put the blisters on my feet. I will always however look back with fondness on the UX and technical challenges of that experience.

Probably Yoko Kanno, the composer for the soundtracks for Ghost in the Shell and Cowboy Bebop. I’ve ingested a ton of media through my life but I’d have to say her impact on those projects was paramount to their successes and more unique than I have ever seen.

I look like I could have been a football player in high school but actually I was the captain of the bowling team.

My wife has been the most influential person in my life. She has taught me new perspectives and better ways to approach any problem.

I have been very fortunate to be working with Cesium’s head of product Shehzan Mohammed and CEO Patrick Cozzi who have pointed me to ACM Siggraph and given me the opportunity to attend.

Working on a large product which is used and needed greatly by industry professionals, having a large impact has made me the most proud in my career so far. Knowing that what I build is being put to use and has longevity is incredibly rewarding.