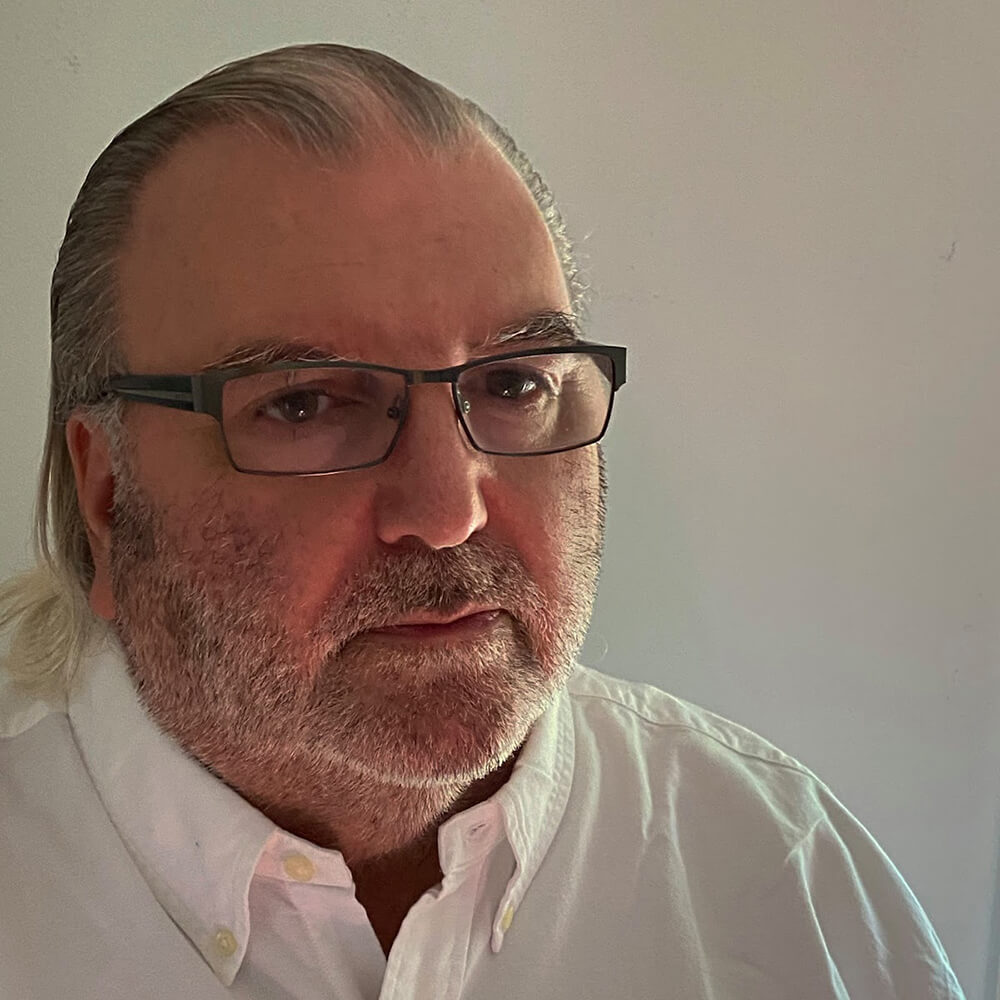 Seaman’s work often explores an expanded media-oriented poetics through various technological means — Recombinant Poetics. Such works often empower the combination and recombination of media elements and processes in interactive and generative works of art. He also produces linear videos to accompany his musical works.  Seaman enfolds image/music/text relations in these works, often creating all of the media elements and articulating the operative media-processes involved. He is self-taught as a musician/composer and often works with the Music Department’s PhD program at Duke. He initially explored experimental music via tape loops and layering processes in the 80’s, he now facilitates this compositional methodology using the computer, in particular using the audio program Ableton Live. He often collaborates with others in terms of his musical output. He is a professor in the Department of Art, Art History & Visual Studies at Duke University, and has until recently been the Graduate Program Director of CMAC – Computational Media, Arts and Cultures, Duke University. He earlier was the Founding Chair of Digital+Media at Rhode Island School of Design, and graduate Program director.

Seaman has been interested in meaning production and has explored ideas around computational meta-meaning systems— systems that enable a user to become mindfully aware of how meaning is arising and changing through their interaction. He is deeply interested in new forms of computation, learning systems, the concept of creating an electrochemical computer, as well as the concept of Computational Creativity – both using the computer as a creative tool, as well as articulating the future of creative potentials as explored via computational devices – the creativity of creativity. He has won a number of awards including two Honorable Mention awards from Ars Electronica in Interactive Art; Intel Research Gift (3 years); Awards in the Visual Arts – Rockefeller Foundation; Fulbright Distinguished American Scholar (Senior Technological Specialist); International German Video Art Prize; NEA Fellowship; Semens’ Stipendium; and Leonardo Award for Excellence, among others. He has been commissioned on a number of occasions including William Forsythe and Ballett Frankfurt’s (Sleepers Guts) for video/set design; the Museum of Image and Sound – MIS Museum, Sao Paulo, Brazil – Architecture of Association (with Daniel Howe); Tanz Performance Köln – Inversion (with Regina van Berkel); Vision Ruhr  — Exchange Fields (with Regina van Berkel); National Gallery  of Canada — Red Dice | Des Chiﬀré; Greatwoods & Leonard Slatkin, Guest Conductor Pittsburgh Symphony — Pictures at an Exhibition (video for live performance); and the Contemporary Art Television Fund (CAT) – The Water Catalogue, WGBH, Boston.

More recently he has been exploring notions surrounding Recombinant Informatics — a multi-perspective approach to inventive knowledge production. The work – The Insight Engine 2.0 is a transdisciplinary database and visualization system which explores interactive Koestler-like bisociation processes for the exploration of crossing disciplinary boundaries and stimulating unconventional thought in research. This work incorporates a natural language API, Micro-Peers (collaborative AI researchers), and a massive database to explore ideas surrounding Neosentience (Seaman’s coin), a new branch of AI.  This generative experimental search-engine work was funded in part by the Duke Institute for Brain Sciences and Bass Connections – The Brain and Society. Seaman considers this system to be a conceptual art/science work. Seaman is currently working on a series of art/science collaborations — poetic installations and scientiﬁc research papers. The book Neosentience | The Benevolence Engine with Otto Rössler came out through Intellect Press. It explores the history as well as the future of AI and Robotics. Ongoing discussions with Rössler and a new book are in the works exploring Rössler’s entire research career, which is to be released through the World Scientific Information Series. Seaman has also collaborated with artist/computer scientist Daniel Howe on multiple works exploring AI and creative writing/multi-media and has completed two albums of experimental music with Howe. One is entitled Minor Distance. They are currently completing a second album called Dispositions (Oscarson). Seaman has developed a series of new generative works and has been working on a series of large format digital prints. He has also collaborated with Craig Tattersall from The Boats / The Humble Bee, The Remote Viewer et. al. They have ﬁnished a large audio work (over 7 hours) entitled Light Folds (working in part with Ciompi Quartet at Duke) and have finished two new albums – one, entitled 120 5×5 and the other is a series of cover songes entitled Standing on the Precipice of Tears (Fluid Audio) for this fall. He also collaborated with vocalist Marissa Bergmann on a series of sonic works – A solo album called f (noir). He recently released an album with XU entitled smlsnd (Fluid Audio).

Seaman is a member of the Duke Institute For Brain Sciences. He co-directs The Emergence Lab with John Supko, at Duke University. Seaman and Supko’s album s_traits exploring AI collaboration was discussed in the top 10 for new Classical music in the New York Times in 2012.  Seaman and Supko recently premiered a major new experimental generative Opera called The Oper&, exploring image, music and text relations. THE_OPER& was commissioned by the Mary Duke Biddle Foundation, and made possible through the generous support of the Duke University Vice Provost for the Arts and Duke Performances, who also produced the work.

Seaman studied at Rhode Island School of Design (Foundations, Video and Sculpture), The San Francisco Art Institute (Scuplture, Performance, Installation), MIT (Master of Science in Visual Studies), and the University of Wales (at the Center for Advanced Inquiry into Interactive Art) for his PhD. He is currently working on a new book – From the Architecture of Ideas: The Life and Work of Ranulph Glanville, Cybernetician.