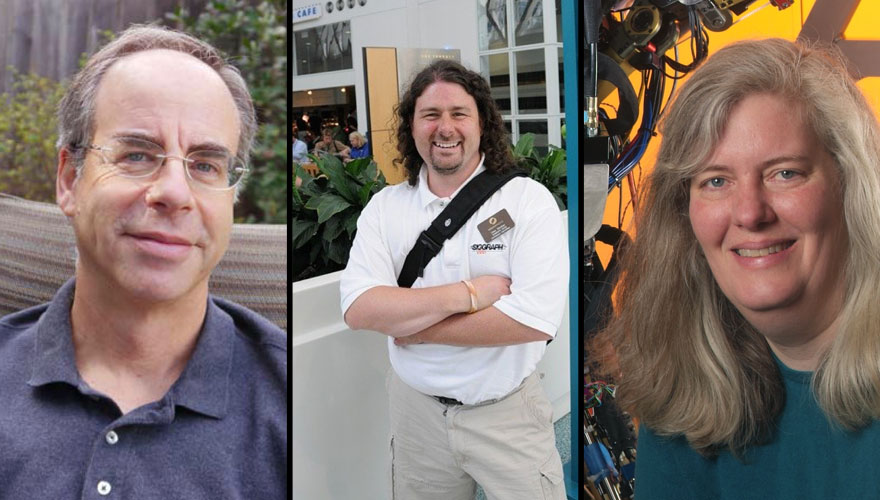 The 2015 ACM SIGGRAPH election results have been announced. Paul Strauss will join the ACM SIGGRAPH Executive Committee as a director-at-large, Dave Shreiner will take over as treasurer and Jessica Hodgins will begin a second term as one of the organization's six directors-at-large. All three will serve three-year terms, beginning on July 1, 2015.

Each of these individuals has been involved with ACM SIGGRAPH and its conferences for a substantial period of time. Paul Strauss, a software engineer who specializes in 3D computer graphics, has attended every SIGGRAPH conference since 1984. In addition to serving as a SIGGRAPH unified juror on multiple occasions, Paul was the courses chair for SIGGRAPH 2013.

Dave Shreiner is an expert in computer graphics and GPU computing, specifically, rendering with OpenGL, and has authored several books and courses on the subject. In 2014, Dave served as the SIGGRAPH conference chair, leading a team of volunteers and staff to orchestrate the 41st occurrence of the world's largest conference on computer graphics, which was an extremely well-received conference.

Jessica Hodgins is a professor in the Robotics Institute and Computer Science Department at Carnegie Mellon University, and VP of Disney Research. Among her many achievements, Jessica has served as editor-in-chief of ACM Transactions on Graphics (2000-2002), was the SIGGRAPH 2003 papers chair, served as the SIGGRAPH 2007 panels chair, and was awarded the ACM SIGGRAPH Computer Graphics Achievement Award in 2010.

ACM SIGGRAPH warmly welcomes Paul, Dave and Jessica to the Executive Committee, where their expertise and passion will help guide the organization on its mission to foster and celebrate innovation in computer graphics and interctive techniques.