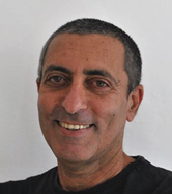 ACM SIGGRAPH is delighted to present the 2018 Computer Graphics Achievement Award to Daniel Cohen-Or in recognition of his pioneering contributions to computer graphics. Daniel’s work has touched on a remarkable breadth of topics across his career, and he has especially made seminal contributions in the fields of geometry processing, shape analysis and image processing.

In the early 2000s Daniel and colleagues did some of the first work in reconstructing 3D surfaces from point clouds. They developed a reconstruction approach using Moving Least Squares in “Computing and Rendering Point Set Surfaces”, which continues to be influential today. Later, in “Laplacian Surface Editing,” Daniel was one of the first to work in gradient-domain processing of geometry. This shift in domain allowed breakthroughs in the quality of shape editing, morphing, parameterization, and hole completion.

Daniel collaborates and mentors widely, and many of Daniel’s students and collaborators have gone on to win awards and conduct significant research on their own. Daniel is a Professor at Tel Aviv University. He received his PhD at the State University of New York at Stony Brook in 1991.
Previous Award Recipients