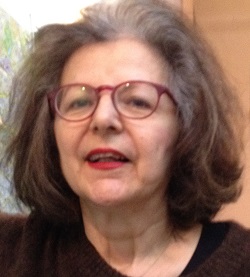 The 2018 ACM SIGGRAPH Distinguished Artist Award for Lifetime Achievement in Digital Art is awarded to Monika Fleischmann, a research artist that has contributed to the field of interactive media art since the 1980s to the present day.

She has pioneered the field of new media art, helping consolidate the shift that has of late transformed media into a research-led interactive media practice and a creative discipline; one that is able to engage in, analyze, and visualize digital media and their transformations in the context of shifting fields of cultural and educational contexts. These transformations have seen digital media turn into a reflexive and analytical arena for critical social and cultural thinking in her work. Her artistic goal is to shed light on the contradictory characteristics of digital media.

Her work – realized since 1987 in partnership with architect and artist Wolfgang Strauss – ranges from fashion to digital architecture, interactive design, poetic and social sculptures that intuitively interact with people and environment to explore intersections between art, science, technology, and society.

In 1987 she co-founded Art + Com, an interdisciplinary research institute for the convergence of analogue and digital culture in Berlin and the first research institute for digital media in Germany. This space has been instrumental to carry on collaborative projects at the intersection between art and computer science.

In 1992, within the Scientific Visualization research group at the GMD (German National Research Center for Information Technology) in Sankt Augustin near Bonn, Germany, Fleischmann and Strauss (the first media artists in Germany to work in a research context in collaboration with computer scientists) began to develop ground breaking interactive media systems in both pure and applied contexts. Among the projects developed were the “responsive workbench,” which today, along with the immersive virtual reality environment CAVE (Cave Automatic Virtual Environment), is extensively deployed in visualization environments, as well as the interactive media installation “Liquid Views” which has been exhibited successfully across the world. The VR installation “Home of the Brain” (1989), in collaboration with Strauss, represents one of the pioneering VR interactive artworks and has earned them a Golden Nica of Prix Ars Electronica for interactive art. Their work has been exhibited and awarded internationally and is part of the collection of the ZKM, Center for Art and Media in Karlsruhe, Germany.

In 1997, she founded the MARS Exploratory Media Lab, a research laboratory at the forefront of artistic and technical-scientific research on digital media and one of the world’s leading hubs for trans-disciplinary collaborations between artists, architects, designers, cultural scientists and computer scientists. As a research artist in a computer science environment, Fleischmann has benefi ted from and extended the research in this field and brought it across global networks by constructing netzspannung.org, one of the first media art archive and eTeaching platforms at Fraunhofer Research Society, Munich, Europe’s largest application-oriented research organization.

Her multidisciplinary background – fashion design, art and drama, computer graphics – has made her an expert in the world of art, computer science and media technology. Her artistic work deals with the change of identity and perception in a digital media culture.

Beside the VR technology used in “Home of the Brain”, Fleischmann has contributed to the development of sensitive surfaces for the promotion of joint content exploration. These began with the mixed reality installation about the fall of the Berlin Wall, “Berlin-Cyber City“ (1988-1989), and continued with the interactive realtime morphing installation “Liquid Views“ (1992-93) which originated in the first mirror touchscreen and further to a contactless interface – the PointScreen technology (patented in 2005) which was motivated by a search for alternatives to touching the screen. PointScreen is based on gesture control and the promotion of electric field sensing – with the energy of the body. Electric field sensing is a method to perceive the body in its essential condition.

She uses the design of interfaces as a tool, as space and as a situation in the basis of communicative action and motivation, for her scientific exploration of mixed realities.

ACM SIGGRAPH is honored to recognize Monika Fleischmann as an important pioneer for her research projects, based on interface design and new forms of communication.