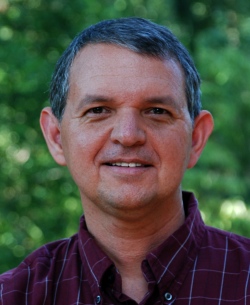 Greg Turk is being recognized with the 2012 Computer Graphics Achievement Award for his contributions to physically-inspired mathematical application in graphics, particularly his work on texture synthesis, geometric modeling, and physical simulation involving thin structures.

Greg’s Ph.D. thesis work on textures generated by reaction-diffusion equations, a notion originally proposed by Alan Turing, showed how to generate realistic-looking patterns like leopard spots or zebra stripes. Furthermore, in studying these “in situ” rather than via a parameterization, he developed a physically-inspired sample-selection scheme for surfaces, in which adjacent samples repelled one another, leading to a sampling pattern with roughly equal inter-sample distances. This early work on reaction-diffusion evolved into other texture research throughout his career: texture synthesis by example, stitching textures using graph cuts, geometric textures, texture transfer from one shape to another, and even the formation of patterns of vegetation in wetlands.

He has also done extensive work on meshes, from image-guided simplification, in which the metric for simplifying a polyhedral object was view-dependent, to automatic remeshing techniques to improve mesh characteristics needed for faithful simulation and other computations, to “zippered meshes”, in which multiple geometric scans of an object are joined into a single continuous whole, most notably the “Stanford bunny,” a mesh that has served as a test-case in hundreds of SIGGRAPH papers.

In recent years, Greg has worked on techniques for the simulation of physical materials, including the representation of thin features, and on surface-tension effects, such as the crown-splash produced by a droplet falling into a bowl of water. Techniques like anisotropic kernel representations of fluids have vastly improved the appearance of the results of these simulations, while a careful understanding of physical phenomena have helped motivate techniques in which thin features exhibit appropriate behaviors.

Above and beyond his research, Greg has been an enormously effective advisor and mentor, not just to his own students, but to many others with whom he’s come in contact. He’s always willing to share advice and encouragement. His short essay on writing technical reviews, produced when he served as the SIGGRAPH 2008 papers chair, has served as a guideline for responsibility and civility in our field’s reviews ever since.

Greg is currently a Professor at the Georgia Institute of Technology, where he is a member of the School of Interactive Computing and the Graphics, Visualization and Usability Center. He received a Ph.D. in computer science in 1992 from the University of North Carolina at Chapel Hill.