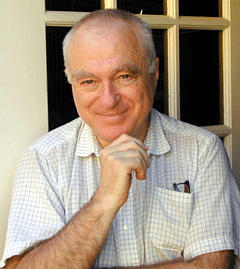 Jean-Pierre Hébert is being recognized with the Award for Lifetime Achievement in Digital Art for his pioneering achievements in creating art through computer programming and leading the way towards new forms of creative expression using algorithms and innovative techniques.

Hébert’s work uses the computer algorithm at its heart, at least in a technical sense (as he points out below, it is the aesthetic and spiritual imperatives that come first). As one of the founders of the ‘algorists’ this is only natural, but, as with all digital artists, the particular algorithms he has turned to have a personal and unique enquiry behind them. Also remarkable in his work is the range of media to which Hébert has employed over the years. The image above shows just one example, while the use of sand as a medium is one of the most delightfully unexpected applications of the algorithm in art.

Algorithms: Hébert has been drawn to algorithms with a mathematical basis, particularly those which seem to expose the underlying structures of the physical world. Hence we see traces of natural processes in the images, those of water, the forces that shape fabrics, the effect of winds on vapour and sand.

The Plotter: Although Hébert has experimented with a wide range of media, the majority of his pieces are executed with the plotter, enabling the use of high-quality inks and art papers. Plotters are generally being replaced in the industries that used them with laser or inkjet printers, so artists like Hébert are having to rely on machines that can no longer be replaced.

The Virtual Plotter: Hébert has written software that generates bitmap images from the plotter codes that his programs generate. This means that a ‘virtual’ plot can be generated and saved to disk for printing with high-quality light-fast printing processes now available. The Virtual Plotter acts a little like the ‘rasterisation’ routines that convert a PostScript or other vector information into a bitmap for printing or manipulation in a paint program. However, the Virtual Plotter needs to preserve the sequence of mark-making to capture the original plotted image. The actual marks that the pens make on paper, and the way that ink bleeds into the fibres, are harder to simulate however.

Sand as a Medium: Although Hébert prefers to keep the details of the mechanisms hidden, his sand pieces allow for his algorithmic explorations to drive a ball through sand in order to create relatively ephemeral artworks reminiscent of Zen gardens. A natural extension of the process has been the introduction of the time element: the movement of the ball through the sand is part of the piece, unlike in the creation of the plotted works.

Since 2003, he has been an artist in residence at the Kavli Institute for Theoretical Physics (KITP) at the University of California, Santa Barbara.