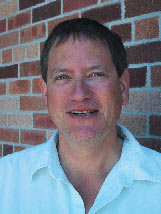 ACM SIGGRAPH recognizes Andrew Witkin with the 2001 Computer Graphics Achievement Award for his pioneering work in bringing a physics based approach to computer graphics. His papers on active contours (snakes) and deformable models, variational modeling, scale-space filtering, space time constraints, and dynamic simulation are considered landmarks that have been inspirational to others and have shaped the field in such different areas as image analysis, surface modeling, and animation. Andy did his PhD. at MIT in the Psychology department. His thesis was about the perception of surface orientation from texture statistics. At Schlumberger Palo Alto Research, Andy developed the technique of “Scale-Space Filtering” which is a method for analyzing signals based on the changes in their inflection points under smoothing. The work has become a classic in the multi-resolution signal analysis literature.

In the early 80s, the Vision and Graphics research communities were largely disjoint. Andy was one of the first to bridge the divide in a series of papers that included his 1987 prize winning paper “Constraints on deformable models: Recovering 3D shape and non-rigid motion” and “Snakes: active contour models” both co-authored with Michael Kass and Demetri Terzopoulos. These papers popularized the idea that Computer Vision techniques could provide interactive “power assists” to a human operator creating CG models.

While still at Schlumberger, and subsequently as a professor at CMU, Andy has done notable work on the use of physically-based modeling techniques not only for animating rigid or deformable objects, but also as an interaction technique for a range of problems including constrained geometric modeling and camera control (with Michael Gleicher) and visualization of implicit surfaces (with Paul Heckbert). In 1992, with Michael Kass, Andy won a Golden Nica from Ars Electronica for his use of physically- based modeling of reaction-diffusion equations to synthesize organic looking textures. In 1988 Andy, with Michael Kass, introduced the idea of using control theory in computer graphics with their “Spacetime Constraints” paper and showed that optimization could be used to direct physically-based character animation.

Recently, Andy has become interested in the very difficult problem of clothing simulation. With David Baraff at CMU, Andy developed the clothing simulator which forms the basis of Maya Cloth, and which was used in the production of “Stuart Little,” among other films. With David Baraff and Michael Kass at Pixar, Andy developed the clothing and hair simulator used in the forthcoming Pixar/Disney film “Monsters Inc.”

Through his work and example, Andrew Witkin exemplifies the tradition of outstanding individuals in computer graphics. ACM SIGGRAPH is pleased to award Andy Witkin the 2001 Computer Graphics Achievement Award.