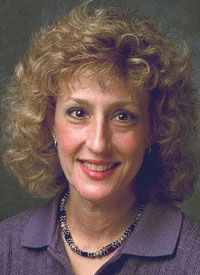 Maxine Brown is the recipient of the 1998 ACM SIGGRAPH Outstanding Service Award. She has a long history of service to the computer graphics and supercomputing communities, including: ACM SIGGRAPH Vice Chair for Operations (1985-1987) and Secretary (1981-1985); SIGGRAPH ’79 exhibits co-chair; SIGGRAPH ’84 Electronic Theater chair; general conference chair of SIGGRAPH ’92 in Chicago (which attracted a record-breaking crowd of 34,000); co-chair of the SIGGRAPH ’94 VROOM event; a member of the IEEE/ACM Supercomputing ’95 conference Information Architect committee; and, organizer and host of the Supercomputing conference Visualization Theater (1988-1991).

She has contributed to many facets of ACM SIGGRAPH, notably: the development of its renowned trade show; the introduction of live performance into the Electronic Theater (as well as naming it the “Electronic Theater” from “Film & Video Show” to recognize all types of multimedia presentations); starting the Education Committee; an insistence on quality, both in terms of content and aesthetics, in ACM SIGGRAPH hardcopy publications; concern that the contribution of its volunteers be well recognized; and, co-editor of the ACM SIGGRAPH newsletter’s landmark “Visualization in Scientific Computing” report.

Maxine D. Brown is an associate director of the Electronic Visualization Laboratory (EVL) at the University of Illinois at Chicago (UIC), responsible for the funding, documentation, and promotion of its research activities. She works closely with EVL’s collaborators at the National Center for Supercomputing Applications (NCSA) at the University of Illinois at Urbana-Champaign and the Mathematics and Computer Science Division at Argonne National Laboratory to coordinate research activities. Prior to coming to EVL, Brown was a professional communications consultant, and held various positions at Digital Productions, ISSCO and Hewlett-Packard.

Brown holds a B.A. in Mathematics from Temple University and an M.S. in Computer Science from the University of Pennsylvania.