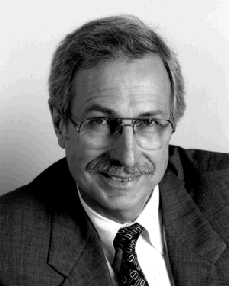 The 1997 Steven A. Coons Award for Outstanding Creative Contributions is presented to Dr. James Foley for his strong and sustained leadership in computer graphics education and research, and for his dedication to the profession through books and his work with ACM, ACM SIGGRAPH and ACM publications.

Foley received the BS in electrical engineering from Lehigh University in 1964 and completed graduate studies at the University of Michigan in 1969. His interest in computer graphics began when he took an early course from Bert Herzog: he was instantly “hooked” and, recalling a lecture from the course, chose distributed graphics computing as his Ph.D. topic. He began his professional career at the University of North Carolina. After a stint at the Bureau of the Census he joined the faculty at the George Washington University (GWU) in 1977. In 1991 he moved to Georgia Tech and in 1996 became Executive Vice President, Mitsubishi Electric Information Technology Center, MERL.

Dr. Foley is the lead author of Fundamentals of Computer Graphics and of Computer Graphics: Principles and Practice. He is recognized as the organizer and motivator whose vision made possible these complex multi author texts and their subsequent updated editions. More than 300,000 copies have introduced an entire generation of graphics students to computer graphics not only in English but, via translations, in Chinese, German, Japanese, French, Polish, Russian and Spanish.

Foley has been a driving force in the graphics community by recognizing that the power of computer graphics can be achieved only through a carefully crafted user interface. At the University of North Carolina he co-authored the important 1974 paper “The Art of Natural Graphic Man-Machine Conversation.” This inspired a career-long emphasis on research and teaching dedicated to the integration of computer technology with human-centered concerns. He launched an on going series of research projects focused on user interface management systems and development environments. In the late 1970’s, at the George Washington University, he introduced one of the first courses on user interface design, a short form of which many of us took at SIGGRAPH, SIGCHI, or NCGA conferences.

Having recognized the importance of user interface studies within computer graphics, Foley combined his research talent with his people skills to build and nurture growing organizations. His group at GWU and, more recently, the world-class Graphics, Visualization and Usability Center (GVU) he established and led at Georgia Tech demonstrate this outstanding leadership. At Georgia Tech he set an interdisciplinary standard for graphics and user interface research. He successfully integrated computer science, human factors, cognitive science, graphics and multimedia design, and engineering disciplines. In a remarkably short period, Foley created an environment in which over thirty faculty and a hundred graduate students worked together. Foley not only built the GVU Center but also taught students and led research projects. He won the College of Computing Graduate Student Award, “Most likely to make students want to grow up to be professors,” and the Sigma XI sustained research award.

He has devoted time and talent to fostering today’s flourishing ACM SIGGRAPH organization and conferences. He and Paul Oliver organized the first short courses at the 1974 conference in Boulder, precursor of the SIGGRAPH conferences. As Vice Chair of SIGGRAPH (1974-76), he established the annual SIGGRAPH conferences beginning with Bowling Green in 1975 and Philadelphia in 1976. His GWU colleague John Sibert and he proposed that SIGGRAPH support student and faculty attendance through volunteer positions and scholarships. He was an early influence on computer graphics standards. With Ira Cotton, he organized the 1974 NBS (now NIST) workshop on graphics standards. He later co-chaired, with Dan Bergeron, the team that specified the 1977 SIGGRAPH Core Graphics Standard. He was section editor of the Communications of the ACM for graphics and image processing from 1975 to 1982, and editor-in-chief of ACM Transactions on Graphics from 1991 to 1995.

Through his books, courses, papers, organizational, and professional contributions, Foley has made a broad and lasting impact on our field. He was an early and vigorous champion of the science, technology, and art of computer graphics, and remains a leader in his efforts to support and strength the computer graphics community. In recognition of these accomplishments and contributions to Computer Graphics, ACM SIGGRAPH is pleased to present Dr. James Foley with the Steven Anson Coons Award.